Canalys has just put out its report for smart speakers for the second quarter of the year. It shows that Google grew 449-percent, while Amazon actually shrunk 14-percent. Alibaba and Xiaomi also make the list rounding out the top four. Interestingly enough, Apple isn’t even listed here with its Homepod. Overall, the market shipped 16.8 million smart speakers in the second quarter, compared to 5.8 million in the same period a year ago, meaning that the market itself grew 187-percent, which is pretty astounding as well.

Google, at least according to Canalys, owns 32.3-percent of the smart speaker market now, with Amazon at 24.5-percent. Now that differs from what we saw out of Strategy Analytics earlier this month, which pegged Google at 24.5-percent and Amazon at over 70-percent. Obviously these numbers need to be taken with a grain of salt, and that’s because none of these companies actually publish how many units are shipped and/or sold each quarter. These are all taken from third-parties. But it does give us a good number for the market shares of each company in the smart speaker space. This report does also show that China is growing pretty rapidly in the smart speaker space. Even though Google Home nor Amazon Echo are available in the country. But thanks to Alibaba and Xiaomi, they are selling very well. 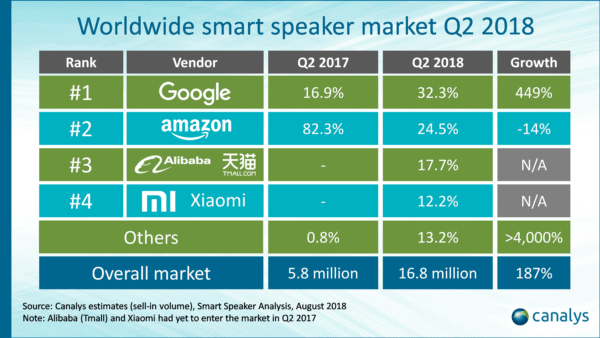