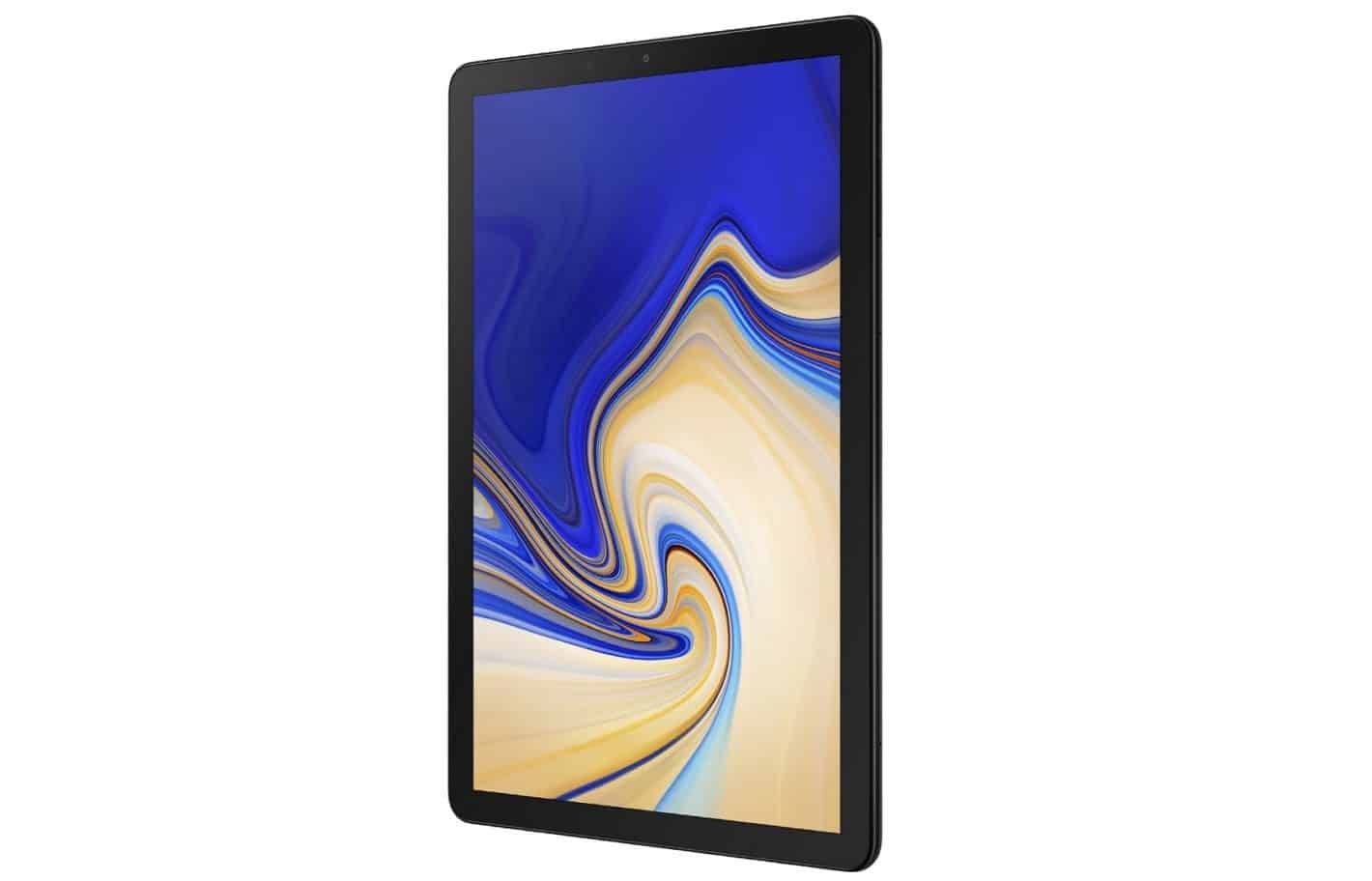 Samsung on Wednesday officially announced the Galaxy Tab S4, its latest series of Android-powered tablets meant to replace the Galaxy Tab S3 as the company's most premium offering in the segment after 17 months. Besides a slew of expected annual upgrades in terms of hardware and processing capabilities, the Galaxy Tab S4 is also Samsung's first tablet striving toward a bezel-less aesthetic that the company has been pursuing in the field of smartphones since early 2017 and the Galaxy S8 line. The South Korean tech giant is primarily positioning the newly announced product family as a series of iPad competitors, though it can also serve as an alternative to Windows hybrids such as Microsoft's Surface Pro devices, with Samsung claiming it can go as far as to outright replace conventional laptops. As far as Android tablets are concerned, the Galaxy Tab S4 should be the ultimate premium option in 2018, and here's why:

In terms of raw processing capabilities, the Galaxy Tab S4 is at the top of the tablet category, with the only blip on its otherwise high-end spec sheet being the inclusion of last year's Snapdragon 835, though its chip of choice is in line with Samsung's strategy of using last-generation silicon in all of its tablets as these devices are mostly geared toward productivity and multimedia instead of gaming. 4GB of RAM is also part of the package, together with 64GB of flash memory, twice as much as the Galaxy Tab S3 had. A 256GB model will also be available for purchase in select markets, Samsung said. The Galaxy Tab S4 retains the microSD card slot with support for up to 400GB of extra storage but replaces the Galaxy Tab S3's 4:3 aspect ratio with a more elongated 16:10 one. Combined with a QHD+ resolution of 2,560 by 1,600 pixels and the fact that the Galaxy Tab S4 uses a Samsung-made 10.5-inch Super AMOLED panel (287ppim), this is arguably the best display in the tablet segment right now.

The rear panel of the newly unveiled tablet features a 13-megapixel camera, whereas its slim top bezel accommodates an 8-megapixel one, with the entire package being fueled by a 7,300mAh battery. AKG, an Austrian audio company owned by Samsung subsidiary Harman, tuned the four stereo speakers of the device which should hence deliver a premium listening experience, especially when combined with Dolby Atmos support meant to ensure a 3D aural experience. A USB Type-C (3.1) connector for charging and data transfers can be found on the bottom of the slate, with the Galaxy Tab S4 also being the first Samsung-made tablet with Bluetooth 5.0 support. The slate is 249.3 x 164.3 x 7.1mm in size and weighs 482g or 483g, depending on the model.

The design of the Galaxy Tab S4 is an area where the newly announced gadget makes the most noticeable departure from its predecessor. The old 4:3 display has been replaced with a more multimedia-friendly 16:10 panel, the physical Home button is gone, and the overall frontal look of the device features much more screen real estate than what was the case with the Galaxy Tab S3. While this is still a far cry away from a truly full-screen design, it's a major step in that direction and suggests Samsung's tablet strategy will me mimicking its smartphone one, at least as far as aesthetics are concerned. As a result, the Galaxy Tab S4 is a sleek-looking device featuring an elegant aluminum frame and a spacious display that should do wonders for both productivity and entertainment, thus offering a great combination of style and function. While it can hardly be deemed affordable, every external aspect of the newly announced Android tablet series is reflective of that premium product design philosophy.

Cameras are generally an afterthought for tablets and while the same is relatively true for the Galaxy Tab S4 as well, Samsung's latest offering is still leading the pack in this regard, offering a 13-megapixel sensor paired with an autofocusing f/1.9 lens and an LED flash on the back, as well as an 8-megapixel camera on the front, with the latter being a significant improvement over the 5-megapixel unit used by the Galaxy S3 line. The significant resolution increase is likely a direct result of the inclusion of Intelligent Scan, a biometric solution that requires a capable front-facing camera and is further explained below. The Galaxy Tab S4 even includes a Selfie Focus option that's effectively its take on portrait mode, with software-generated background blur seeking to make subjects stand out.

The new tablet line runs Android 8.1 Oreo out of the box, with its firmware of choice being the company's newest implementation of Google's operating system called Samsung Experience 9.5 that's also expected to be pre-installed on the upcoming Galaxy Note 9. The new software offers smoother performance, particularly in regards to menu transitions, and a new version of Bixby that promises to be much more intuitive to use, in addition to boasting a wider array of capabilities. Project Treble support is on board as well and may lead to Samsung delivering security patches to the Galaxy Tab S4 in a timelier manner compared to how it supported (and still supports) the Galaxy Tab S3 series. While the company's AI assistant is pre-installed on the device, the Galaxy Tab S4 lacks a physical Bixby key dedicated to launching the digital helper which is a staple of Samsung's high-end Android smartphones nowadays. The tech juggernaut's established mobile app suite including Samsung Health, Samsung Music, SmartThings, and Game Launcher is pre-installed on the tablet as well.

The Galaxy Tab S4 line offers a 7,300mAh battery, a significant improvement over the 6,000mAh cell found inside the last generation of the company's high-end tablets. While the new slates also ship with slightly larger screens, the 2.35GHz Snapdragon 835 is significantly more energy-efficient than the older Snapdragon 820 as it uses a 10nm FinFET process node instead of the 14nm one and should consequently deliver better battery life. Adaptive Fast Charging support is also on board but unchanged compared to the previous model, meaning the Galaxy Tab S4 will likely take around three hours to be fully recharged given its massive battery capacity. A compatible charger is already included in the box.

Samsung opted to get rid of the physical home button on the Galaxy Tab S4 which had doubled as a fingerprint sensor on previous tablets from the company. The move unexpectedly leaves the gadget without a fingerprint reader solution which even the firm's entry-level offerings in the segment feature. Samsung is looking to make up for that fact with the inclusion of an iris scanner, as well as its proprietary Intelligent Scan technology supported by the Galaxy S9. In practice, the service works by combining the iris sensor readings with the image of your face taken with the front camera so as to deliver a biometric authentication solution that's both faster and more secure and should even work well in low-light scenarios.

The Galaxy Tab S4 also comes with Samsung Knox technologies pre-installed, allowing users to secure their data from being stolen or infected even if the attacker manages to unlock them, provided that they've taken the extra step to utilize the Secure Folder app. The Knox security platform also guards against malware and has been specifically designed to make large-scale deployment and management extremely straightforward, thus being an attractive option for IT administrators.

The Galaxy Tab S4 is compatible with a new Book Cover Keyboard that transforms the device into a hybrid portable computer similar to the Microsoft Surface Pro series, as well as the company's S Pen stylus. As the device is larger than its predecessor, backward compatibility isn't a thing here and you'll have to buy a new keyboard even if you're upgrading from the Galaxy Tab S3. The last S Pen generation should still work just fine with the device (though the new one comes in the box), whereas the tablet also supports the Samsung Desktop Experience first introduced with the Galaxy S8 lineup early last year.

The DeX functionality is integrated into the tablet itself and allows you to connect the slate to a mouse and an external keyboard while enjoying a more productivity-focused interface, regardless of whether the Galaxy Tab S4 is paired with a Book Cover Keyboard or not. The gadget can even be connected to an external monitor with no extra accessories and serve as a touchpad in that operating mode. Such a setup will require a compatible HDMI-to-USB-C multi-port adapter which isn't included in the box. The S Pen allows you to take notes on the fly without even unlocking the Galaxy Tab S4 and also features advanced real-time translation capabilities – just select any text with it and leave Samsung's software to do the rest. Samsung also announced a new POGO charging dock meant to turn the Galaxy Tab S4 into a screensaver and information panel while simultaneously charging it, as well as a regular Book Cover.

As was the case with the 2017 lineup, the Galaxy Tab S4 series consists of two main models, with the only major difference between the two being 4G LTE support, or a lack thereof. The LTE-enabled variant of the slate is also one gram heavier than the Wi-Fi version and weighs 483g. Both otherwise feature identical specifications and are compatible with the same accessories. While previous leaks suggested a white version of the tablet is on the cards, only the black variant has been announced today. The ultra-premium 256GB Galaxy Tab S4 model will presumably only be available with LTE support but the company has yet to confirm that.

The Samsung Galaxy Tab S4 will become available for purchase in the U.S. on Friday, August 10, at Amazon, Verizon, Best Buy, and Samsung.com, starting at $649.99. Sprint and US Cellular won't offer the device from day one but should start retailing it later this summer, Samsung said. Early reservations are available as of today until August 9 on Samsung's official Galaxy Tab S4 page and anyone who opts to take advantage of them will receive a 50-percent discount on the Book Cover Keyboard which will be regularly priced at $149.99, provided they purchase the two together until September 8. The regular Book Cover will go for $59.99, while the POGO charging dock will carry a $69.99 label. The price figures in Europe are identical to the U.S. ones, save for being expressed in euros. One exception is the UK where the local division of Samsung clarified the prices of both models, stating that the Wi-Fi version will be priced at £599, whereas the LTE one will set you back £649. The Book Cover Keyboard will retail at £119 in the country.