Samsung’s Galaxy Note 9 is equipped with the best mobile display ever created, panel analytics company DisplayMate Technologies claims, citing a wide variety of in-depth tests it’s been running on the newly announced Android flagship in recent weeks. The firm has been attaching the same claim to every new high-end smartphone from Samsung released over the last several years and is once again quick to commend the South Korean manufacturer for continuing its track record of consistent innovations in the segment.

This time around, the Galaxy Note 9 set a new record for absolute color accuracy (0.5 JNCD), achieving a result that DisplayMate deems “indistinguishable from perfect,” at least to the naked eye. The phablet’s ability to reproduce colors in an accurate manner is not only unmatched by its rivals but also surpasses every other panel found on contemporary tablets, TVs, computer monitors, and laptops. Besides once again pushing the boundaries of peak luminance, the Galaxy Note 9 also delivers massive improvements in terms of luminance variation, or a lack thereof. While the Galaxy Note 8 had a luminance variation rate of 38-percent, the Galaxy S9 series managed to bring that figure down to only six-percent, whereas the Galaxy Note 9 has it sitting at just two percentage points, with this unprecedented level of consistency directly benefitting its ability to deliver accurate colors and contrast, according to the same study.

With the average picture level now having little to no impact on the display performance of the Galaxy Note 9, the intensity scales observed on the module experienced minimal shifts regardless of screen contents, hence allowing Samsung to once again raise the bar for display performance consistency. The Galaxy Note 9’s peak brightness sits at between 710 and 1,050 nits with the Automatic Brightness feature turned on, with the absolute maximum being lower than the 1,240-nit peak of the Galaxy Note 8 but only in the context of content with an extremely low average picture level. As apps, images, and video content capable of taking advantage of better low-APL peak luminance are nearly non-existent, the Galaxy Note 9 will still deliver a brighter screen than its predecessor on average, thus improving the readability of its display panel in a broad range of commonly used scenarios at the expense of niche use cases.

The Galaxy Note 9 also sets a new standard of quality in terms of viewing angles, with its brightness dropping by only 27-percent at a 30-degree angle compared to a 29-percent drop observed on the Galaxy S9 and Galaxy S9 Plus, the handsets that held this record until now. Coupled with the ability to deliver an infinite contrast due to the very nature of OLED panels, the display of the Galaxy Note 9 is extremely forgiving in the context of ambient lighting and viewing angles, DisplayMate found. Despite the fact that Sony has been delivering 4K mobile displays for years now, the image benchmarking experts at the  Amherst, New Hampshire-based firm don’t see that resolution jump as a notable improvement over QHD+ panels due to the fact that the differences between the two are indistinguishable to the naked eye on such small screen modules meant to be used in smartphones. One exception to that rule would be virtual reality applications but Samsung’s VR focus declined in recent years, Sony never had one to begin with, and DisplayMate still doesn’t test for such use cases in the first place. Refer to the table below for a summary of DisplayMate’s latest findings.

The Galaxy Note 9 is currently available for pre-orders across the world, starting at approximately $999, depending on the market. The phablet ended up being launched nearly a month earlier than anticipated due to weaker-than-expected Galaxy S9 sales, Samsung confirmed as part of its consolidated financial report for the second quarter of the year. With numerous industry analysts now predicting the Galaxy S9 line to be the worst-selling generation of Galaxy S flagships since the 2012 Galaxy S3, Samsung is going all in with the new addition to the Galaxy Note family and is expected to deliver an even more significant technological update with the Galaxy S10 series early next year. The Galaxy Note 9 is scheduled to be released globally on August 24, with consumers in most parts of the world having a choice between a 6GB/128GB model and an 8GB/512GB variant of Samsung’s most powerful Android smartphone yet. 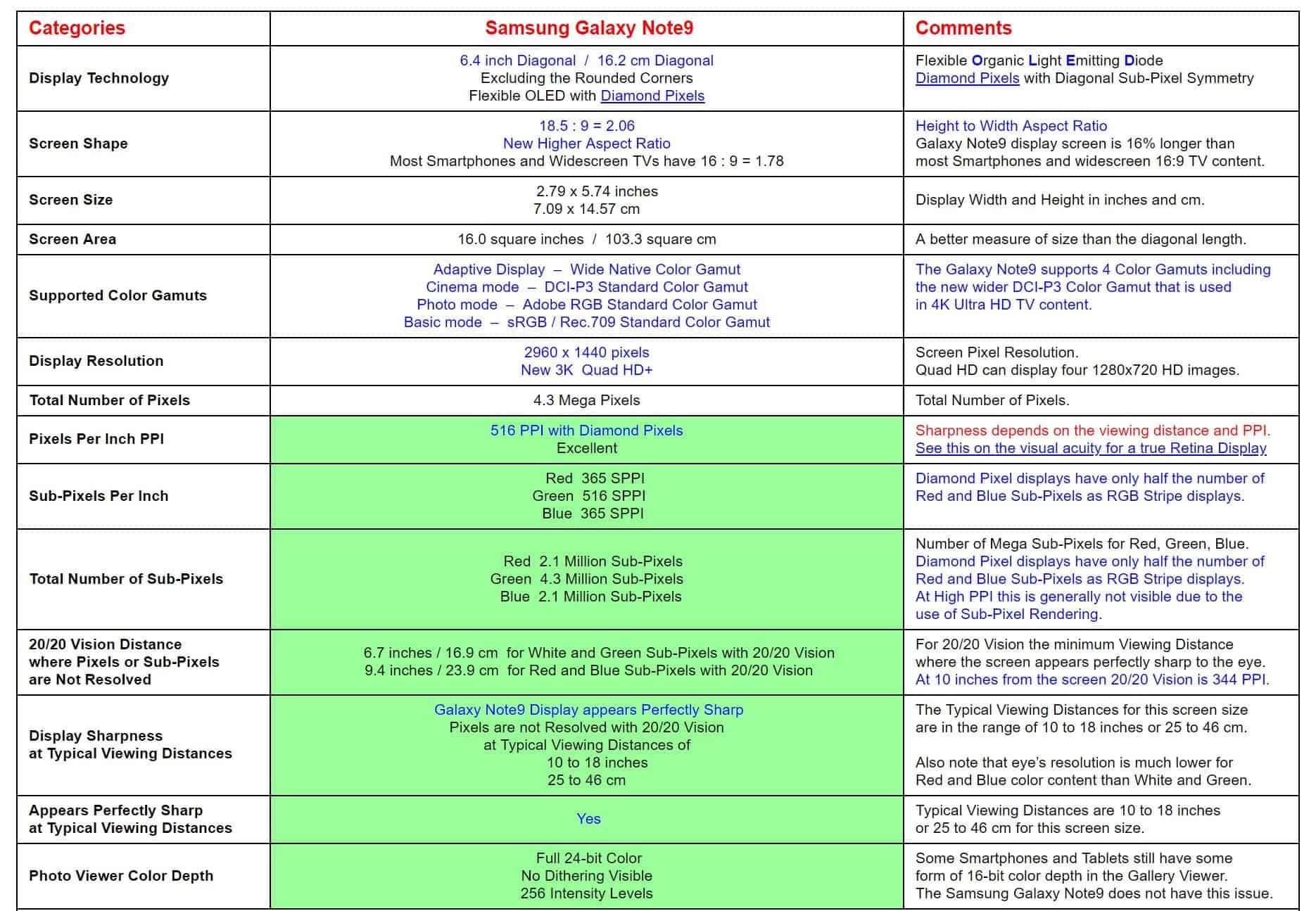