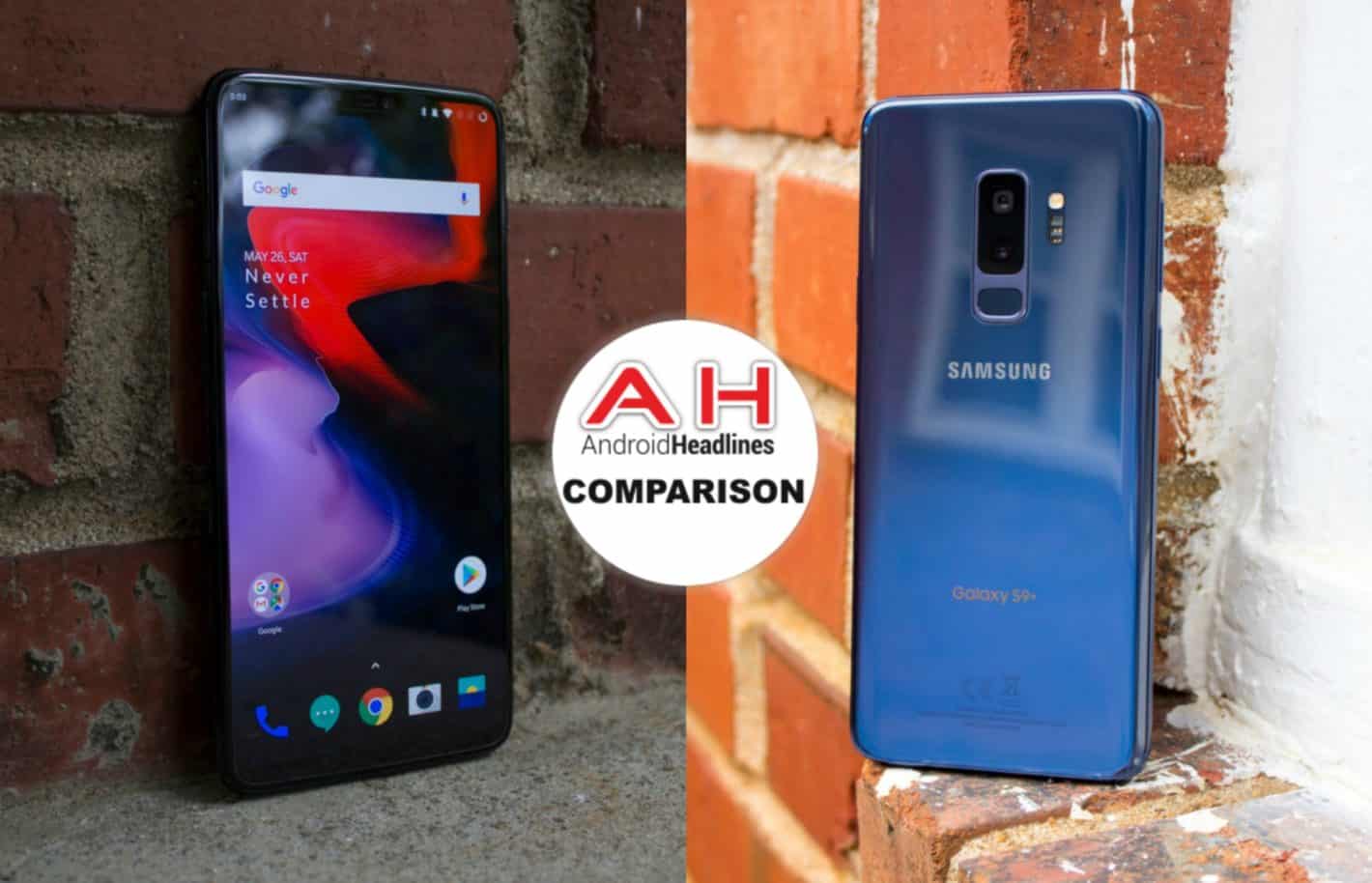 With such a price difference, one might think these devices would have nothing in common. This could not be further from the truth – they both include an AMOLED display over 6-inches and Gorilla Glass 5. They both use the same SD845 processor, an Adreno 630 processor, 6GB of RAM, a 64GB base of storage, dual cameras, almost the same size battery with fast charge support, and they are even close in their physical dimensions. Many of the usable suspects are available, such as Wi-Fi, NFC, Bluetooth v5.0, USB Type-C port, Google Pay, Hi-Res audio, rear-mounted finger sensor, 3.5 mm headphone jack, facial recognition, and Android 8.0.

Please take a careful look at the detailed specifications comparison chart below and here you will see just how these two high-end Android smartphones stack up against each other. Which one is the better purchase by offering the most technology for the least amount of money? These is the type of question we will attempt to answer. First, we will go through some of the aspects they have in common.

OnePlus has always provided a quality build, and the OnePlus 6 has that quality in its design, materials, and even the notched AMOLED FHD+ display to go up against the best flagship smartphones on the market. Yes, the price has steadily risen each year, but it is still a bargain in the crowded field of expensive smartphones. You will not find a heart rate monitor or SpO2 sensor, but you will find an Alert Slider making it easier to zoom in and out when using the great dual camera. The OnePlus 6 with its all-glass makeup comes with most necessary items, but nothing too fancy. If we have anything to complain about it would be the lack of memory expansion and for some – the notch in the display.

The OnePlus 6 features a 6.28-inch notched Optic AMOLED display with only a Full HD+ resolution. This gives it 2280 x 1080 pixels, which amounts to 402 pixels-per-inch (PPI). It uses the latest 19:9 aspect ratio that helps give the phone its overall modern look. This taller and narrower display is more suited for watching movies and videos and also makes multitasking easier. As with other Android smartphones that use a notch, you can falsely hide the notch by making it look like there is a small bezel across the top, but it is still there. Gorilla Glass 5 protects the display.

The OnePlus 6 comes with a Snapdragon 845 processor and an Adreno 630 for any intense graphics you can throw its way. The SD845 is an octa-core processor that is clocked at 2.8 GHz and packing 6GB to 8GB of RAM, along with a base of 64GB of non-expandable storage. If you purchase a 128GB or 256GB model, it will come with 8GB of RAM with each additional memory upgrade costing only $50. A 3,300 mAh capacity battery powers the OnePlus 6. Dash Charge is available for quick charging, but even with its all-glass backing, OnePlus offers no wireless charging.

OnePlus uses a dual-camera setup on the 6 with increases in size all around. The main sensor is 20-megapixel with an aperture of f/1.7, and uses both EIS, and OIS for stabilization. The secondary camera is a large 16-megapixel sensor with the same f/1.7 aperture. Both cameras use a PDAF and a dual LED flash. The front-facing camera (FFC) is a large 16-megapixel unit that comes with EIS and Auto HDR that should provide great selfies and video chatting. OnePlus has designed a better interface and you can now use the Alert Slider to zoom in/out on subject matter.

The top selling features of the OnePlus 6 are a modern looking, well-built device, with 6GB of RAM, and a great dual camera setup with and excellent FFC all for a reasonable price. There is a notch on the display and no expandable memory, but for $629, you can get an 8GB/256GB model – still hundreds below the cost of a Galaxy S9 Plus. There is no Samsung Pay, but you do get Google Pay. The user interface, OxygenOS, is a very light application over Android 8.1 Oreo and it runs fast and smooth. The device measures 155.7 x 75.4 x 7.8 mm and weighs in at 177 grams. It comes in Midnight Black, Mirror Black, or Silk White. It will cost you $529 for the 6GB/64GB version, $579 for the 8GB/128GB version, and $629 for the 8GB/256GB version – a bargain for any of the configurations.

Samsung decided, after their big revamp of the Galaxy S8 last year, to only add minor refinements to the Galaxy S9 and the Galaxy S9 Plus. There were design changes that made it easier to pick up the device and to use it without accidentally opening an app near the edge of the curved display. The two most exciting additions are the long awaited stereo speakers and the dual camera setup – found only on the S9 Plus model. A new feature, called Intelligent Scan, combines the facial recognition and the iris scanner to validate the user to unlock the device. This makes for a faster and more secure way to unlock your device. The fingerprint sensor is smartly relocated below the camera to help avoid smudges. AR Emoji is a new feature – that needs more work – that allows you to make an emoji of yourself.

When it comes to display size, the S9 Plus uses the same sized 6.2-inch Super AMOLED Infinity Display as the S8 Plus. It is sports a QHD+ resolution with 2960 x 1440 pixels with 529 PPI. The S9 Plus uses an Always-On display that helps extend battery life, while allowing the user to quickly glance to determine if they want to read the entire notification then or wait until later. Gorilla Glass 5 protects both the front and back of the device.

Galaxy S9 Plus models sold in the US/China use the more familiar Snapdragon 845 octa-core processor clocked at 2.7 GHz with a powerful Adreno 630 GPU for graphics – the same one used in the OnePlus 6. S9 Plus units going to EMEA countries use an equally powerful Samsung Exynos 9810 octa-core processor clocked at 2.7 GHz and a Mali-G72-MP18 GPU. The base RAM increased from 4GB to 6GB and the base storage to 64GB that is expandable. Samsung also sells models with 128GB or 256GB of storage, but it will depend on your area and carrier whether you can order one.

Critics have waited for a Samsung flagship with a dual camera – the Note 8 was the first, the Galaxy S9 series is the second. The dual camera also sports improved Super Dual Pixels on its 12-megapixel sensors. It packs PDAF, OIS, 2x Optical Zoom, 10x Digital Zoom, and an LED flash, but the most exciting feature is its new adaptive aperture that will change from a large f/1.5 (low-light pictures) to a smaller f/2.4 (for bright situations). The second camera has a fixed f/2.4 aperture and is used for special effects. The FCC uses an 8-megapixel lens with an aperture of f/1.7 that includes auto-HDR and includes its own autofocus.

While we always prefer a larger battery, Samsung decided to use the same 3,500 mAh capacity non-removable battery they used in the previous Galaxy S8 Plus. Because of great battery management, under normal circumstances this battery should last throughout the day. If you need to charge your battery during the day, you have a choice of using Samsung’s Adaptive Charge or quick wireless charging for a fast charge.

Samsung always ‘overloads’ their flagship devices with extras – some of them are useful to all users, such as Samsung Pay, while others are used by a select group, such as the heart monitor, and others will not be used by most users, such as the DeX module. To the right or left of the display, whichever you choose, a convenient side panel will appear for quick access to your most used contacts and apps. The Samsung Health app gives you a workable heart rate monitor, an SpO2 sensor, and a new blood pressure monitor. Samsung’s Bixby personal assistant is available, as is an improved Samsung DeX design that allows you to transform your S9 Plus into a desktop computer. It comes with the new and less invasive Samsung Experience 9.0 (UI) on top of Oreo 8.0. The device measures 158.1 x 73.8 x 8.5 mm and weighs in at 189 grams. It comes in Midnight Black, Coral Blue, Titanium Gray, or Lilac Purple, with Samsung announcing a new Red version in China. Retail pricing ranges from $915 to $930, but there are quite a few promotions available.

The OnePlus 6 packs a large AMOLED 19:9 display, the same processor, the same GPU, the same amount of RAM, the same amount of base memory, larger dual cameras, a larger FFC, a large battery, a 3.5 mm headphone plug, and facial detection. It has a solid build that certain looks like a 2018 flagship smartphone, all for a price of $529.

Certainly, the Samsung Galaxy S9 Plus is a more formidable device with a Super AMOLED QHD+ resolution, an Always-On display, expandable storage, dual aperture, higher res Audio with stereo speakers, wireless charging, an iris scanner, Samsung Pay, IP68 certified, DeX, Heart Rate Monitor, SpO2 Sensor, Samsung Connect, Intelligent Scan, Bixby, and AR Emoji feature. This is a lot of features, but they come at a $900+ price tag. Only you can decide if you want a real buy (with a notch), or the real deal.