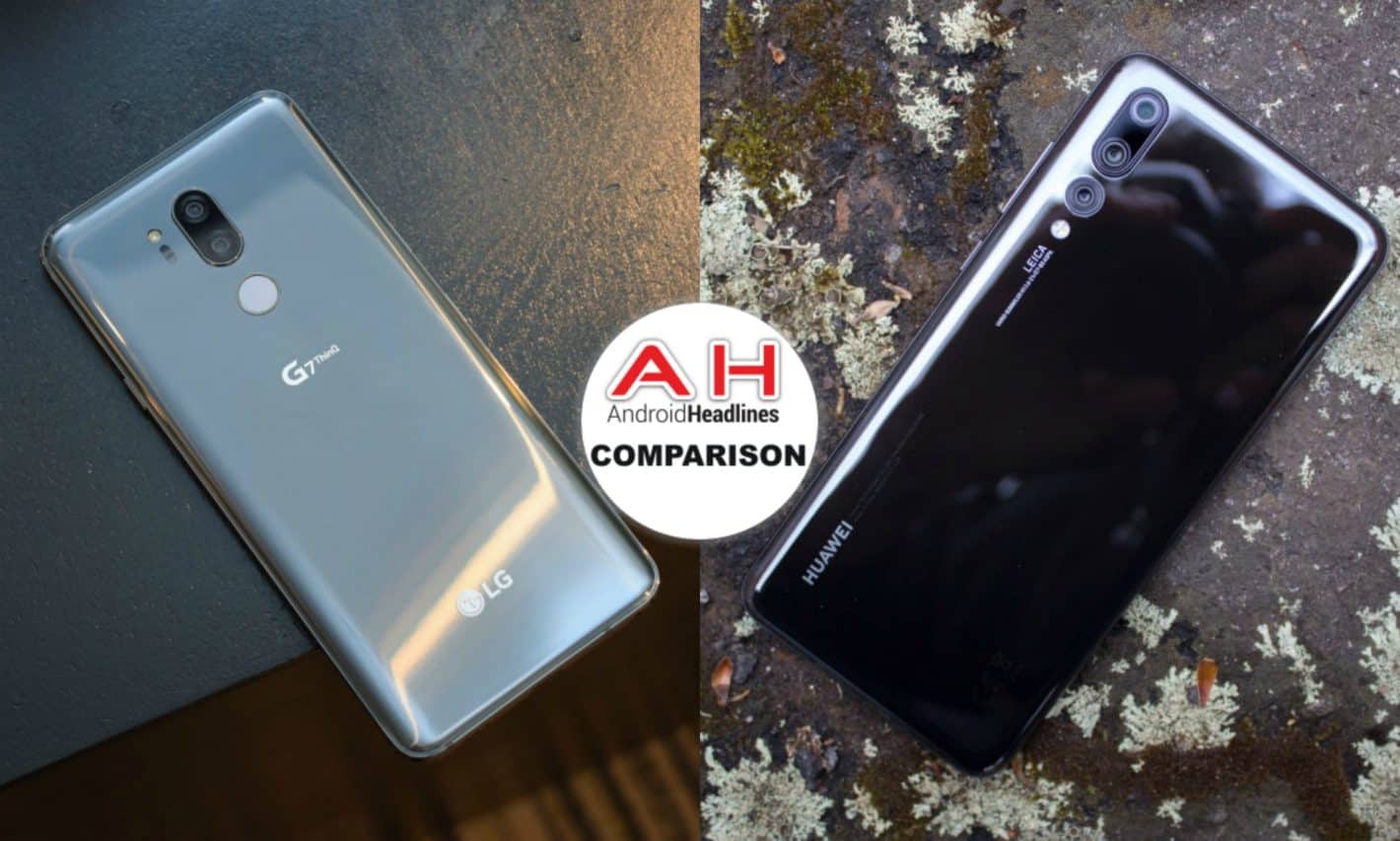 Do we have a good one for you today – the battle of the notched displays with the LG G7 ThinQ taking on the Huawei P20 Pro. Both devices look amazing and use the newer aspect ratio that provides a modern look. The LG G7 ThinQ costs less than the P20 Pro and with their similarities, the winner of this comparison will have to come down to brand, design, and individual features. How does the dual camera on the LG G7 compare to the three camera setup on the P20 Pro? Let’s take a look at what these two smartphones have in common by taking a look at the specification sheet before we go into more detail.

The LG G7 ThinQ and the Huawei P20 Pro do have a few things in common. We can start with the display, which are the exact same 6.1-inch size. They have a 19.5:9/18.7:9 aspect ratio, respectively, they both have an Always-On display, and they both use Gorilla Glass 5 for protection. They use different, but top-of-the-line processors and GPUs, both offer similar RAM and storage configurations – but only the LG G7 offers expansion. Both offer a multiple camera setup, with dual-cameras in the LG G7 and triple cameras in the P20 Pro. Both offer non-removable batteries and Quick Charge 3.0. Even the physical sizes are almost identical, and they both offer the usual Wi-Fi, NFC, Bluetooth (v5.0 in the LG G7 and v4.2 in the P20 Pro), and a 3.1 USB Type-C port. Both models facilitate Google Pay, boast a form of dust and water-resistance, Hi-Res Audio, facial recognition, a fingerprint sensor, Android 8.x (Oreo), and Gorilla Glass 5 backing.

Other than adding ‘ThinQ’ to the end of the name, very few changes were made to the LG G7 ThinQ. LG did increase the display size, the camera sizes, and the battery size. LG added a display ratio of 19.5:9 resulting in a slightly taller and more narrow display. This also results in a more modern look and a better-looking smartphone overall. LG still uses the LCD display technology and this time around they added a notch. LG did keep the excellent Always-On feature that saves battery life and is a real convenience for the user. LG also increased the megapixel count on its dual camera setup, but then decreased the wider angled lens on the secondary main camera.

The LG G7’s display size jumped from 5.7-inches to 6.1-inches with a 19.5:9 aspect ratio, which makes for a taller and narrower display and provides an improved viewing experience for movies, games, and also for multitasking. LG’s FullVision continues with its LCD setup, but it does use a QHD+ resolution with 3120 x 1440 pixels and a density of 564 pixels-per-inch (PPI), as well as Gorilla Glass 5 for protection. The Always-On floating display is used to glance at notifications and to save battery life. The new display can go up in brightness to 1,000 nits for better outdoor viewing, but only for 3 minutes before dropping back down to save battery life.

The Qualcomm Snapdragon 845 along with an Adreno 630 GPU powers the LG G7 ThinQ. The SD845 is an octa-core processor clocked at 2.8 GHz and this has been combined with 4GB of RAM and 64GB of expandable internal storage. Depending on your location you can purchase a model with 6GB RAM/128GB of expandable storage. The LG G7 offers you a fast and smooth experience, and while the battery capacity decreased from 3,300 mAh to a 3,000 mAh, the LG G7 does retained Quick Charge 3.0 and normal wireless charging.

The LG G7 ThinQ packs a dual camera setup with two 16-megapixel sensors – one for primary photos and the second to use when you need a wider angle. The main camera has a large f/1.6 aperture, Laser and PDAF, OIS, and LED flash. The secondary camera can be used for group pictures or a landscape shot because it does have a slightly wider angle, but has a smaller f/1.9 aperture. LG increased the size of the main and secondary cameras from 13-megapixels and increased the quality of sensors and software as well. The LG upgraded the small front-facing camera (FFC) from a small 5-megapixel sensor with a small f/2.2 aperture to a larger 8-megapixel sensor and a larger f/1.9 aperture for selfies and video chatting.

LG is one company that is not afraid to try new things – some of them are smart and others not so smart. They added a notch to its display, but then took away the on/off capability of the fingerprint sensor. Thankfully, LG retained the 3.5 mm headphone jack, but then deceased the angle width in their secondary camera. LG introduced its Boombox speaker – it is only one speaker, but it resonates sound through the smartphone’s chassis to give you bigger sound. The LG G7 now uses Bluetooth to v5.0, Google Pay (also supports other mobile payments), and comes with Android 8.0 (Oreo) out-of-the-box. The LG G7 ThinQ measures 153.2 x 71.9 x 7.9 mm, weighs in at 162 grams and comes in Platinum Gray, Aurora Black, Moroccan Blue, Raspberry Rose. It will cost you about $750 for the 64GB model.

Huawei knows how to design and manufacture a beautiful smartphone, but only to a point. Even though the P20 Pro is a real beauty and a flagship model, it still uses a FHD+ OLED display, and includes a notch. It does not offer wireless charging even though it has a glass back. Huawei also introduced one of the more interesting camera setups with three camera lenses. The P20 Pro uses the latest HiSilicon Kirin processor with a base of 6GB of RAM, and 128GB of non-expandable storage. There is no 3.5 mm headphone jack, but a very light user interface that Huawei calls EMUI 8.1 allowing the phone to run fast and smooth. Priced at €899 ($1,055), it is a little on the steep side, especially when you consider that the LG G7 ThinQ will cost you around $750.

The Huawei P20 Pro enjoys a large 6.1-inch display, uses the AMOLED technology but only an FHD+ resolution of 2240 x 1080 pixels, working out to be 408 PPI. It does provide a rudimentary Always-On display that lacks in any real customization other than providing the current time and date. Huawei designed the display with a notch that does not affect the viewing experience, as long as the apps are designed to take advantage of the aspect ratio. Gorilla Glass 5 protects both the front and back of the device.

The Huawei P20 Pro uses is its own HiSilicon Kirin 970 quad-core processor, clocked at 2.4 GHz, and mated to a powerful Mali-G72 MP12 GPU. The P20 Pro packs a hefty 6GB of RAM and 128GB of non-expandable internal storage. Powering the P20 Pro is a large 4,000 mAh battery, easily enough to last the entire day. If you find yourself needing a charge, the P20 Pro does include Quick Charge 3.0, but there is no wireless charging.

While many high-end smartphones are still looking to get dual-cameras, the Huawei P20 Pro includes three rear-facing cameras that use Leica Optics. The main camera sensor that takes the majority of your photos is a large 40-megapixel RGB sensor with an aperture of f/1.8 along with both laser and PDAF, an LED flash, and 3X optical zoom. The second sensor adds a useful Monochrome 20-megapixel sensor with an f/1.6 aperture for those times you want a great B&W photo. The third is an 8-megapixel camera that uses an RGB sensor, an f/2.4 aperture, along with a telephoto lens. The FFC is a huge 24-megapixel sensor with an f/2.0 aperture, allowing great selfies and video chats.

For as much as the Huawei P20 Pro brings to the table, including a high price, it does not permit Wi-Fi Calling nor does it include the latest Bluetooth version. There is also no 3.5 mm headphone jack, only an IP67 water-resistance level, and no wireless charging. It does include NFC for mobile payments and an IR Blaster. The camera area is one of the best on the market, and it includes the addition of a monochrome camera, zoom features, and Night Mode. The device measures 155 x 73.9 x 7.8 mm and weighs in at 180 grams. It comes in Midnight Black, Twilight Purple, Black, and Pink Gold. Retail pricing ranges from $900 to $1,055, depending on where you purchase it.

While the Huawei P20 pro is a beautiful smartphone, I have to give the nod to the LG G7 ThinQ as the winner of this comparison…if nothing else, because of pricing. Even though the LG G7 still clings to the LCD technology, it does have a QHD+ resolution, giving it 564 PPI versus 408 PPI on the P20 Pro. The LG G7 allows you to expand the memory and offers wireless charging. It is IP68 certified versus the IP67 on the P20 Pro. It has a rear fingerprint sensor, a 3.5 mm headphone jack, and allows WiFi calling. It has its own Google Assistant button and supports Google Lens. The LG G7 also offers both facial and voice recognition. It does all of this for a price of about $750.

The Huawei P20 Pro does use the better AMOLED display technology, but only the FHD+ resolution and with a notch. It does utilize the Always-On display, but it is a rudimentary design only showing the date and the time. It has a base of 6GB of RAM, but only 128GB of non-expandable memory. The highlight of the P20 Pro is the camera area with not two, but three cameras with a huge 24-megapixel FFC. It does have a larger battery, but no wireless charging. Huawei threw in Hi-Res audio and stereo speakers, but does not give us a 3.5 mm headphone jack. The P20 Pro does support VoLTE, but has no Wi-Fi calling support. It is a beautiful device, but at close to $1,000, the LG G7 ThinQ just seems like the winner of this comparison.