Millennials may not represent as large a driving force behind the growth of mobile data usage as previously thought, according to a new report from Strategy Analytics. The group, which the firm cites as ranging in age from 22 to 37-years-old in 2018 based on Pew data, seems to use a considerable amount of Wi-Fi compared to other demographics. Although data collected by the firm’s subsidiary AppOptix doesn’t cover the above-listed age range precisely, in terms of Wi-fi, does show that those below 25-years and up to 35-years in age use an average of 15GB per month. Those below 25-years-old use 16.8GB while the 25 to 35 demographic consume 13.2GB every month. For comparison, the older two groups collectively average just 10.9GB per month. That’s split by age with those over 46 consuming just 10.6GB and those between 36-years-old and 45-years-old connecting via Wi-Fi for an average of 11.2GB.

With that said, the figures appear to level off when taking mobile connections into account despite that Millennials have traditionally been suspected of using more data on that front. That’s also contradictory to the fact that users in that group have reportedly been especially susceptible to “nomophobia” – or phone separation anxiety. By contrast, whereas those users who are over the age of 46 only average around 2.6GB of monthly cell data, those in both the 26 to 35-year age bracket and 36 to 45-year group use 4.8GB. Mobile subscribers younger than 25-years-old average a mobile usage of around 4.1GB per month.

Mobile data usage is growing and expected to continue doing so at an even faster rate with the arrival of 5G. However, in spite of the fact that users spent around $86 billion on mobile apps last year, users may not be connecting to mobile data as the primary means to use those apps. The technology still seems to be a top way for Millennials and other groups to consume media and access entertainment or tools. Bearing that in mind, the demographic appears to show a reasonable degree of frugality when it comes to conserving mobile data. It wouldn’t be surprising if changes in the pricing of either mobile or Wi-Fi connectivity are responsible or Millennials could just be using more publicly available hotspots. However, neither the implications of the split and its cause are immediately apparent. 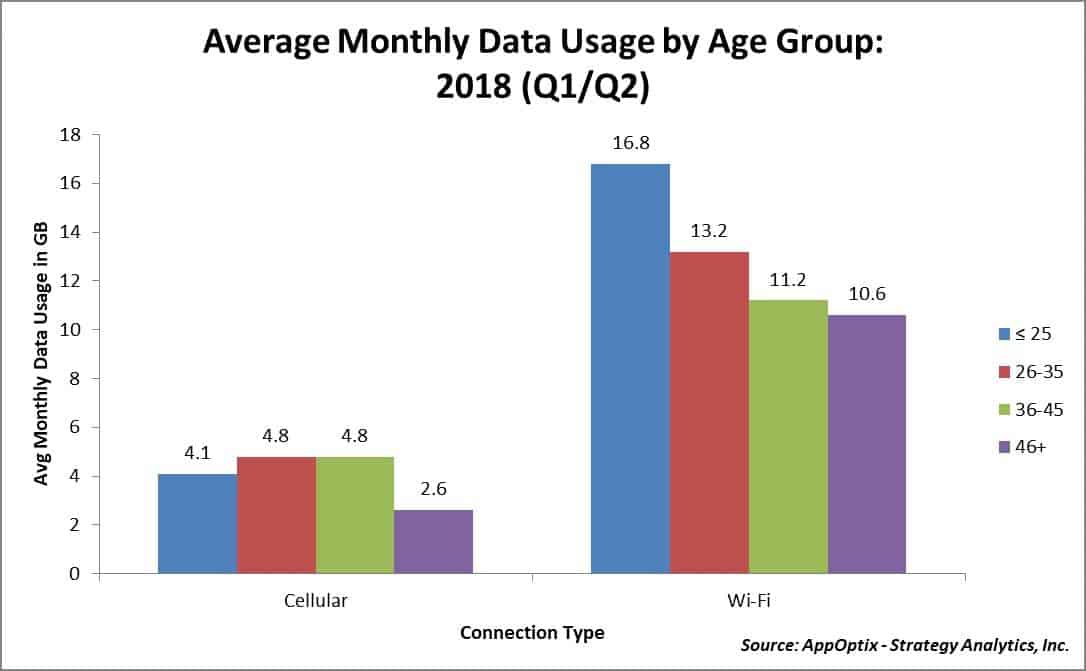