In-display fingerprint sensor technology is expected to become more popular among smartphone makers next year, suggests a recent TrendForce report forecasting a market share increase to 13 percent, up from this year’s 3 percent. The research firm speculates that both optical and ultrasonic-based in-display sensors will increase in popularity, and manufacturing prices could drop low enough for these technologies to become valid solutions for market segments other than the premium space. The report also states that Samsung is likely gearing up for the release of new smartphone models equipped with in-display sensors next year, with the Korean OEM expected to rely primarily on Qualcomm’s ultrasonic-based solution.

Samsung is rumored to become the main driving force behind the popularization of Qualcomm’s ultrasonic in-display fingerprint sensors, claims the research firm who speculates that the technology will reach a market share of 6.3 percent next year. The remaining 6.7 percent market share will be covered by optical-based in-display fingerprint solutions provided by suppliers including Synaptics, whose sensors might become increasingly affordable amid increased competition. Specifically, the report suggests that while Synaptics’ optical-based in-display solution was priced at anywhere between $12 and $15 in 2017, it’s possible for prices to be slashed in half next year, encouraging other suppliers including Silead and Goodix to also increase their presence in this market space. Furthermore, given that Samsung is one of the largest smartphone makers in the world, Qualcomm’s ultrasound-based solutions might become nearly as affordable as capacitive-based technologies and could make their way into other flagship handsets developed by Chinese OEMs. As a result, Qualcomm might gain control over the in-display fingerprint sensor landscape next year, despite its late arrival to the scene, and could force suppliers of both capacitive and optical-based technologies to change their strategies in order to remain competitive.

All in all, this could lead to more smartphone makers being able to adopt fingerprint scanners – both capacitive and optical – for models positioned below the high-end segment. In addition, the research firm suspects that conventional fingerprint sensor, as well as face-recognition technologies, will increase in popularity next year alongside in-panel solutions. The first smartphone to feature an in-display fingerprint sensor was the Vivo X20 Plus UD unveiled last January, and since then, both Huawei and OPPO have made use of similar technologies for devices like the Porsche Design Mate RS and the R17, respectively. 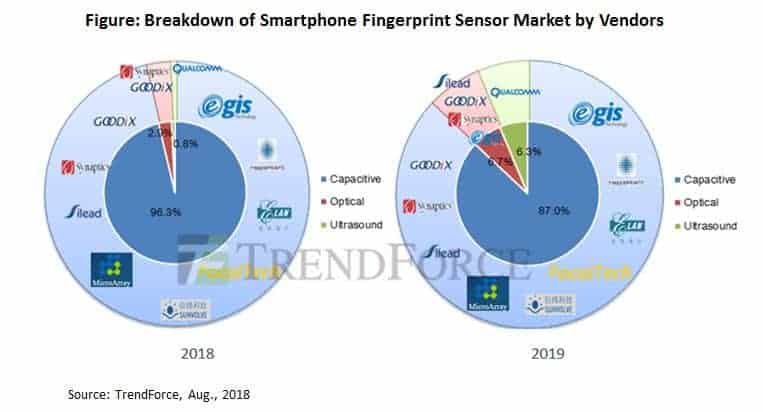