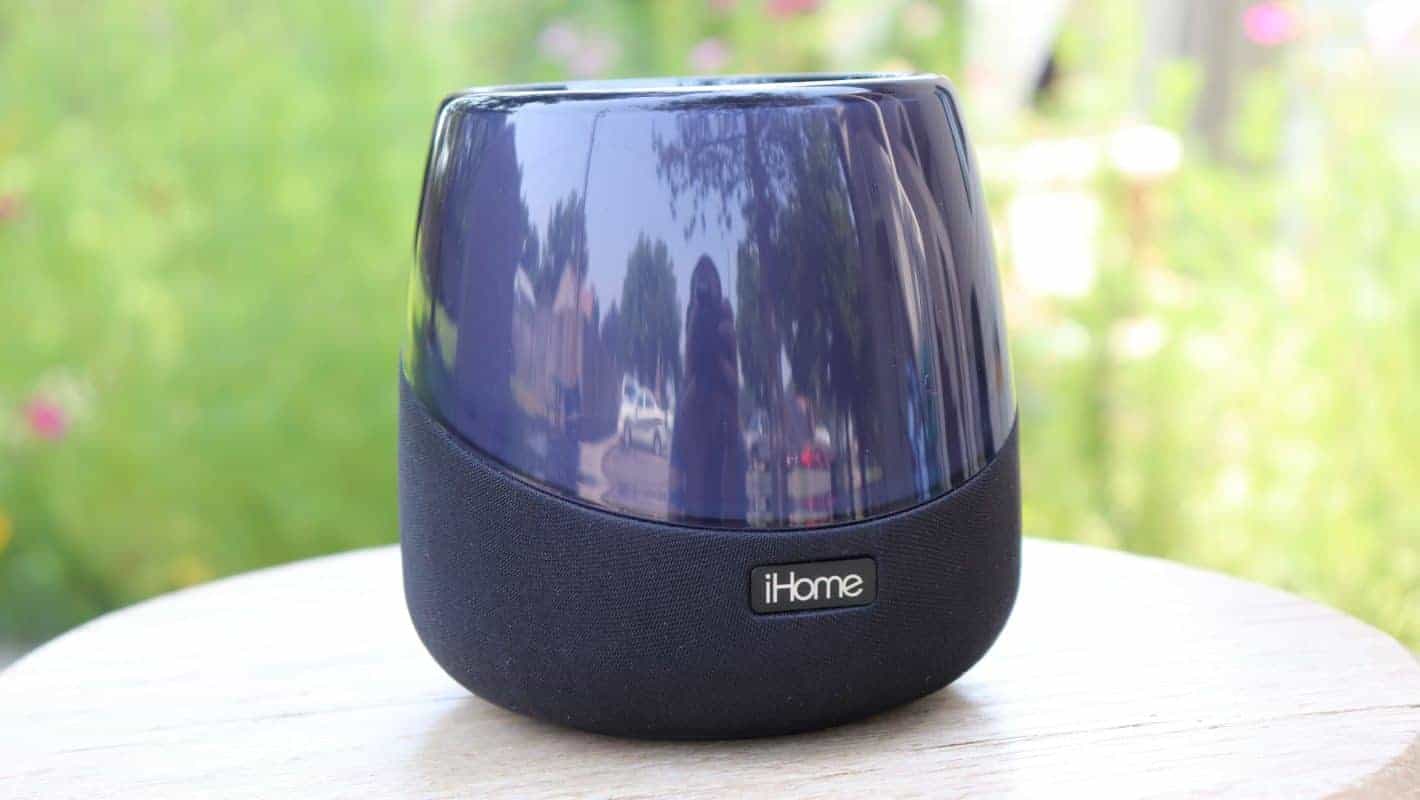 iHome may have got its start as a dock and accessory maker for Apple products and smartphones but the company’s ‘Spot for your Dot’ series of Amazon Echo Dot docks has been going strong since 2017. Among the latest additions to that family, the company has released a Spot for your Dot Bluetooth speaker dock, sold under model number iAV5. That’s sold at just shy of $60 and brings both portability and bigger speakers to Amazon’s second-generation Echo Dot device, allowing it to be used and interacted pretty much anywhere a connection is available. Moreover, it provides a substantial audio quality boost to the online retailer’s somewhat quiet sound machine and its built-in digital assistant. It bears mention that the iHome iAV5 doesn’t ship with its own Amazon Echo Dot but for those who already have one – setting a caveat or two aside – this could be a near perfect add-on item. 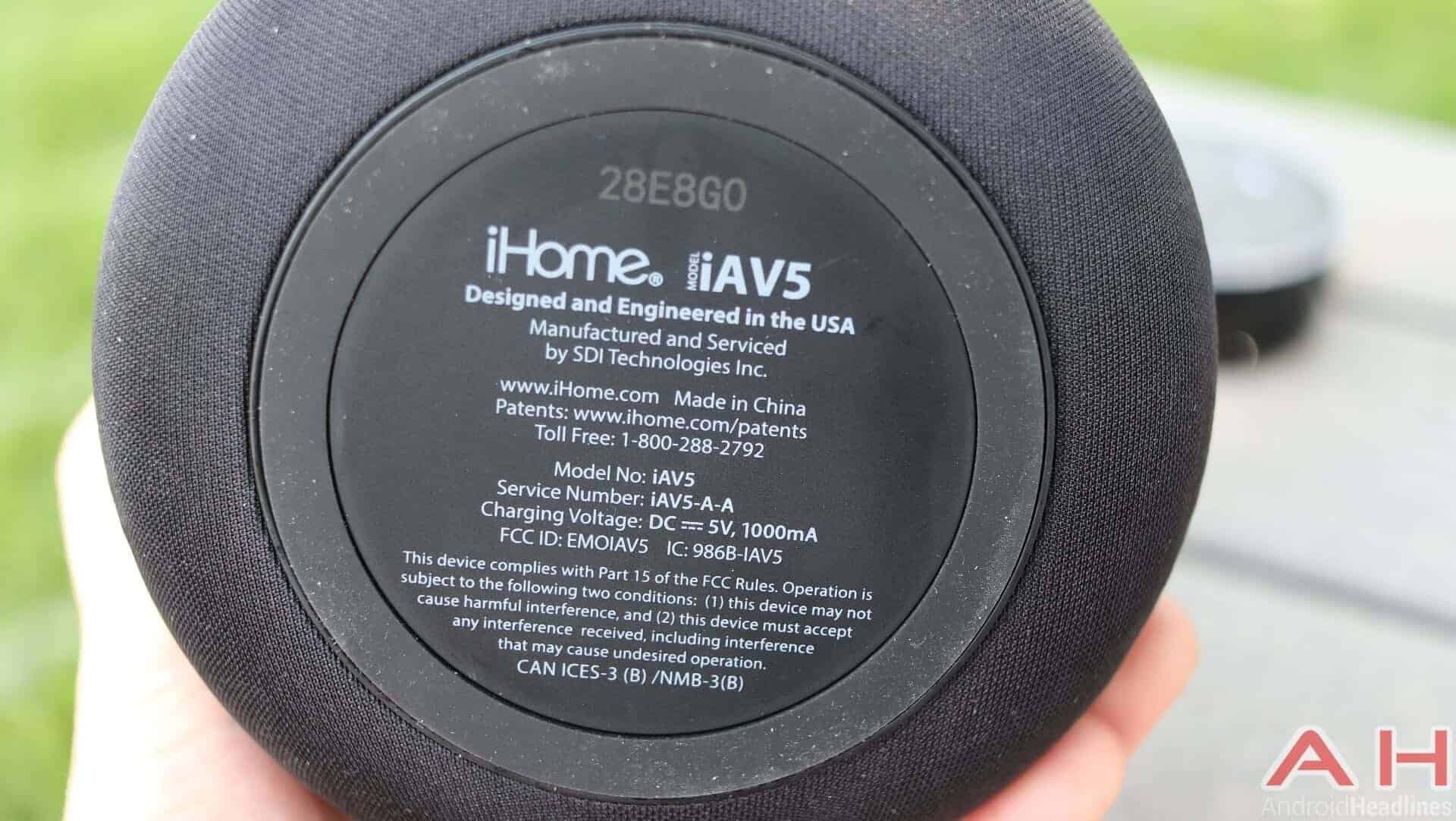 With regard to specs, the iHome iAV5 bumps the output up to 6 watts via 360-degree surround speakers build into Reson8 speaker chambers. Those are backed by a passive radiator intended to pump up the bass output. The company doesn’t list the built-in battery capacity but it has a claimed life of around eight hours following seven hours of charge time and charges via micro USB. A built-in cable is part of the device build, used to power up the docked Echo Dot. That’s all built into a cylindrical package that is slightly larger and heavier than a Google Home device at 125.2mm x 121.16mm x 128mm and 616.89 grams. That’s without an Amazon Echo Dot second generation installed, which adds another 163 grams. The lower portion of the iAV5 is all speaker while the upper section features a built-in light with 5 modes to suit the circumstances of use. That’s because it can also be used as a speakerphone or with any other Alexa Skill, so use isn’t strictly limited to music playback. Of course, connectivity isn’t limited to the Echo Dot since Bluetooth is the sole means of connectivity. 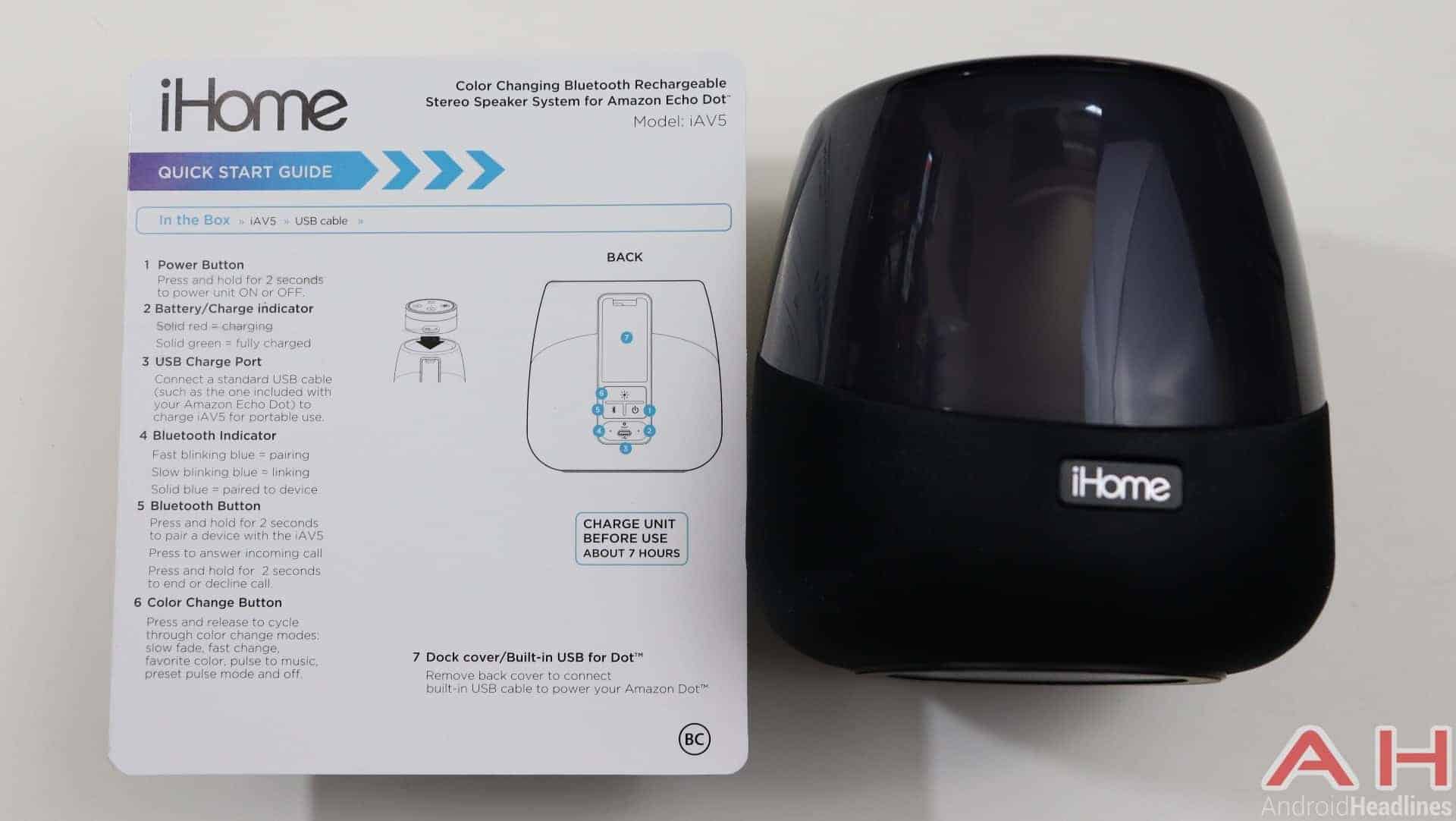 As might be expected, the first item to be noticed nestled in the box is the iHome iAV5 dock and the speaker itself. Digging a bit deeper, however, reveals that is effectively all that’s in there. There’s also a single fold pamphlet explaining its use and providing pertinent contact and website information for the manufacturer but that is the entirety of contents aside from snugly fitting packaging materials. Of course, that means there’s no charging cable or wall adapter either. That means buyers will either need to have a spare charger laying around, rated at 5V/1A, as per the specifications, or will need to factor one into the overall purchase cost. They can typically be found for well under $10 on Amazon or elsewhere, so that isn’t a deal breaker but is worth noting. 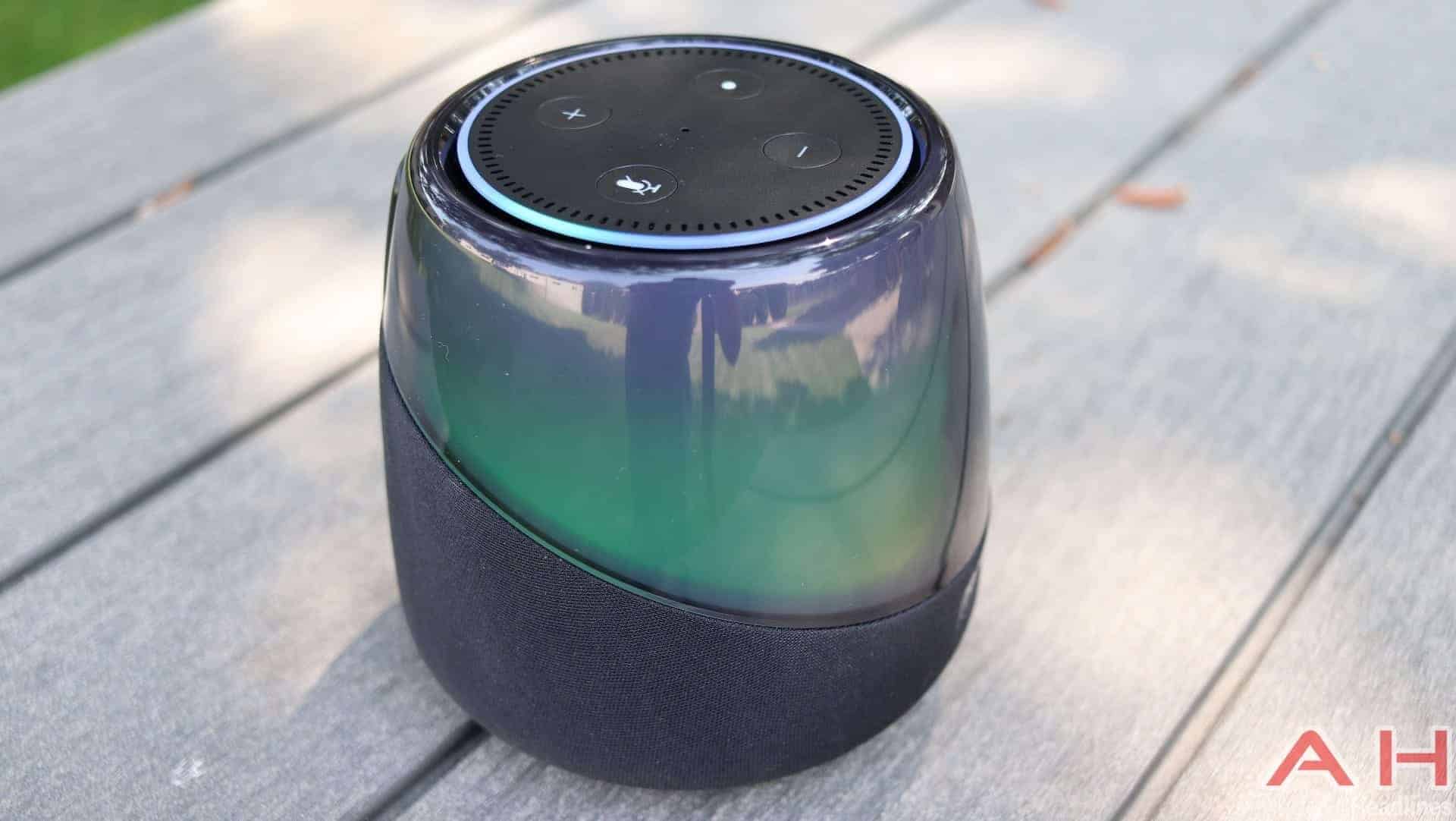 In terms of design, the company doesn't give any indication as to whether or not there's any ruggedization here and it's safe to assume there isn't. When installed in the dock, an Amazon Echo Dot sits at the top completely exposed to the elements. Moreover, although the build feels high-quality and solid, it has a tendency to attract dust, lint, fibers, and anything else that might be floating around in the air. That may be the polycarbonates and cloth speaker cover featured or due to the electricity flowing through the device. With that said, it doesn't only get caught in the cloth but also shows up in the grooves between the speaker and the lighting portions and on the rubber backing material. Cleaning that off, at least in areas such as the temperate desert where this was tested, seems to be futile. Indoors, that's not really a problem aside from the plastic shell also seeming to cling to any and all oils that come into contact with it – such as from fingers. The results can be annoying for those who want to keep their devices looking new, especially when used outside.

Setting that aside, the lights featured on iHome's iAV5 are spectacular. There are five modes available via the rubber light button on the back – found next to the charging port, reset button, power button, Bluetooth button, and charging port. Each of those buttons feels solidly built, if a bit squishy, with the exception of the recessed reset button. Modes for lighting include slow or fast fading “glow” mode, singe color setting to any available of the primary colors, a mode that pulses at a preset rate, and one that pulses with the music being played. Colors include green, blue, red, purple, orange, yellow, and – for pulse modes – everything in between. With regard to quality of the ports, the built-in Amazon Echo Dot cable plugs tightly into that device and sits just behind a rubber flap. In fact, a flathead screwdriver is recommended for unplugging. The charging cable for the speaker itself is snug, with no wiggle at all. That gives the impression that the dock is going to last for quite some time. 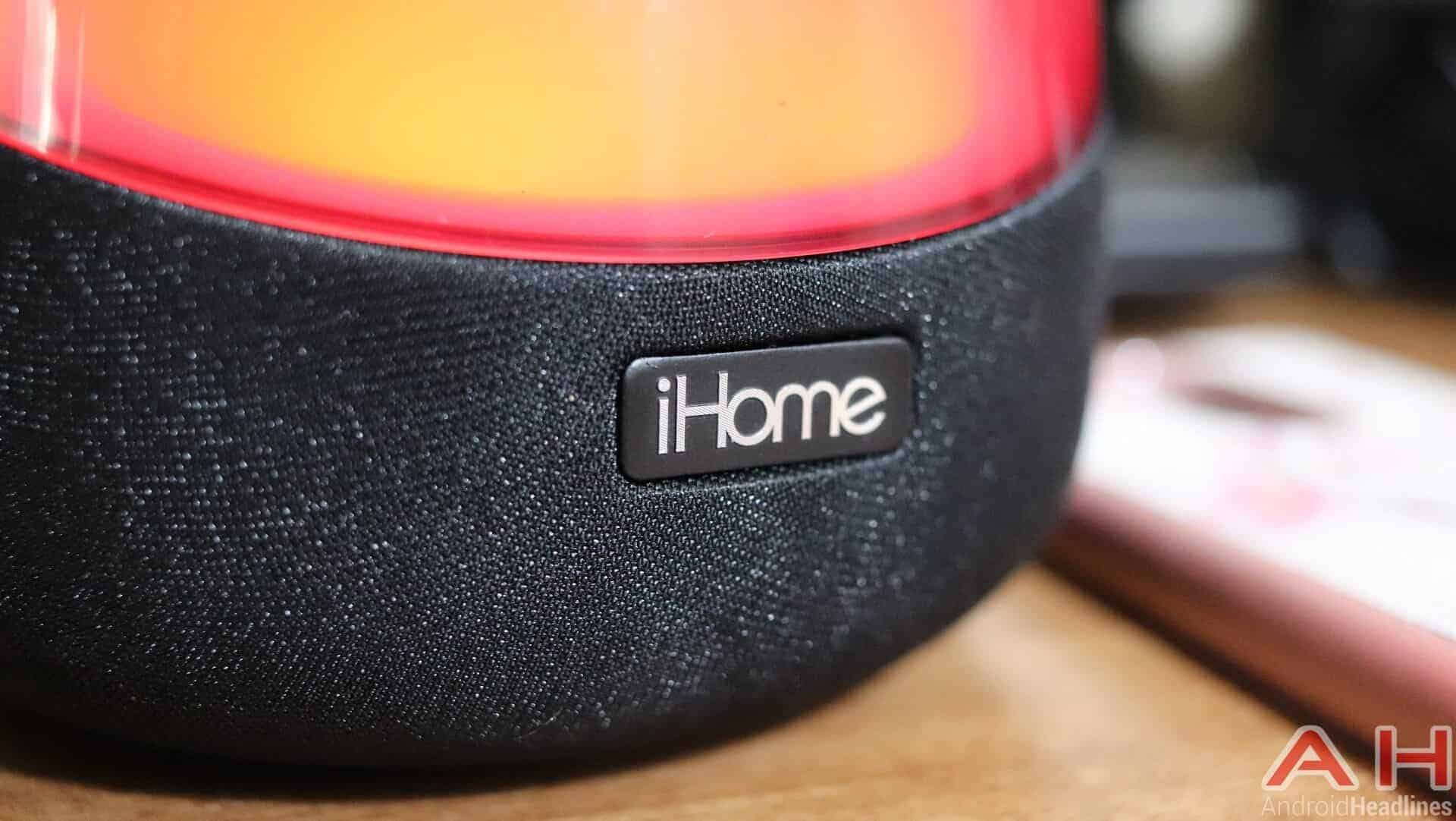 Sound quality is, of course, going to be the biggest factor when deciding on a Bluetooth speaker, whether that’s intended to be used as an Echo Dot dock or not. As far as the iHome iAV5 is concerned, the sound is not going to impress everybody but it does go well beyond the standards set by the second generation of Amazon’s small-form assistant-centric hardware. By comparison, the audio is much louder and better quality with a lot more bottom-end to the bass tones. It isn’t audiophile by any stretch of the imagination but the improvement is enough that we feel confident recommending the iAV5 where it meets buyer requirements. Having said that, turning both the device and the Echo volume all the way up, or even most of the way up results in a persistent fuzziness to everything. It’s fair to say that it is going to be barely noticeable for most listeners but it’s noteworthy nonetheless because it could indicate problems with the speakers later on. Unless our review unit was defective in some way, buyers will probably want to avoid ramping the volume up to the maximum to avoid blowing the speakers too quickly.

Setting that aside, the audio quality is still much better and louder than the stock sounds emanating from the second-generation Amazon Echo Dot. This accessory isn’t at all only intended for music listening either, so the above-mentioned issue isn’t necessarily a big deal. However, the level of volume does cause yet another small problem. During testing, we noticed that the built-in mics used by Alexa to detect the wake word and, subsequently, to listen for commands and questions, had a difficult time. That really only happened when the volume was at around one and a half to double the standard Echo Dot volume – at around a level-6 or above via Alexa’s voice commands. But it is a much bigger issue than speakers that go fuzzy at full volume. In fact, we had to almost shout while standing directly over the device at that volume just to get a response. Thankfully, Amazon’s devices cut back the volume to almost muted when the wake word is detected. So things didn’t devolve into a shouting match. Failing that, voice interactions are possible via a smartphone with the app if the appropriate settings are turned on within the app. 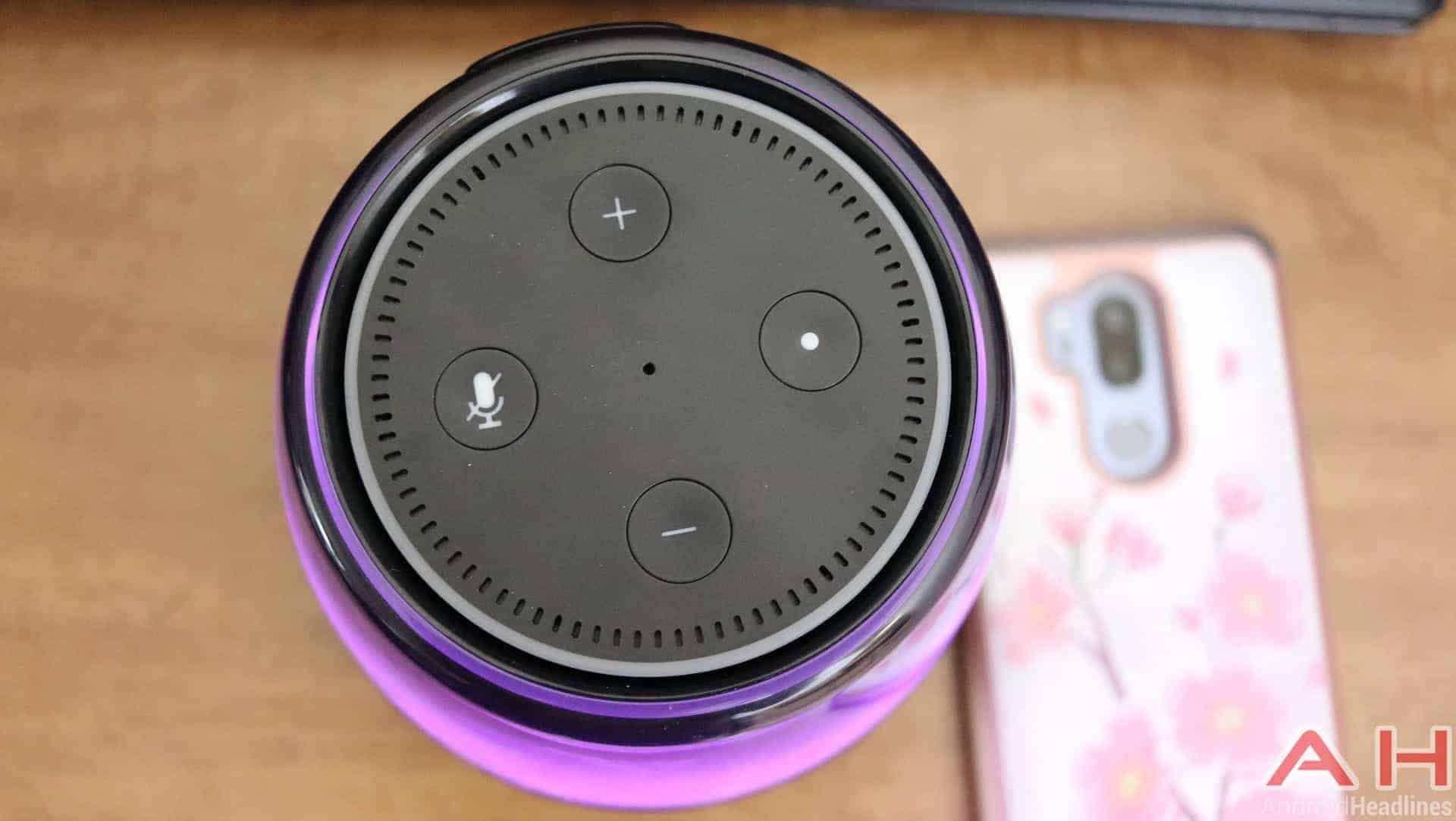 Battery life was almost exactly as advertised, with the volume turned up to around half. How solid connection is and which light settings are chosen will almost certainly affect that but the results aren't bad for such a loud portable speaker. That's without considering that it is also powering all of the Amazon Echo Dot's components. So users should expect around eight hours of use. Meanwhile, the charging time seemed to be a bit quicker than advertised. That wasn't a major difference, approximately ten to twenty minutes faster. However, it's definitely worth noting since the iHome iAV5 won't necessarily last nearly all day for most users and charging is claimed to take nearly as long as the device can be powered on for.

Meanwhile, connectivity is a bit complicated thanks to its intended use as a dock for the Echo Dot. Alexa requires a solid internet connection to work properly, so there is a Wi-Fi aspect to things but the dock itself only connects via Bluetooth. When starting up for the first time, there's a nearly 10-minute process to get everything unpacked, plugged in, and synced up. That includes navigating the Alexa app to turn on Bluetooth if it isn't already and any setup for that device. After that, turning on the iHome-branded speaker turns on both and the pairing happens automatically. Owners can also press the Bluetooth button momentarily to pair with another streaming device where Wi-Fi isn't available for the Echo to use. Conversely, a hotspot could always be used to power Alexa as needed but that does make up for some of the drawbacks presented by the Echo Dot's connectivity requirements. At very least, it maintains some of the appeal generated by the idea that a portable A.I. assistant is possible.

Whether used to augment the comparatively weak speakers of the Amazon Echo Dot or to serve as an easy-to-use and functional aesthetic augmentation which also happens to be portable, there's a lot to love about iHome's iAV5. The fact that it's portable is simply an added bonus. Meanwhile, the few caveats to owning the device are relatively easy to overcome. The exception to that may be that the Dot costs just short of $50 as of this writing. Rumors have also already begun to swirl about the third-generation of that smart speaker. It's worth pointing out that doesn't mean that the third generation will be revealed in the near future, however. Having said that, the iHome iAV5 is still worth recommendation, particularly for those who already own a second-generation Amazon Echo Dot. For those who don't, whether its worth the cost or not will come down mostly to personal preference and opinion. At the same time, it's unlikely that the new Dot will make the leaps and bounds required to match up with the audio quality and lighting offered by this dock, without a significant increase in cost. So it's probably going to be a great buy either way.

Buy iHome iAV5 Color-Changing Bluetooth Speaker
Advertisement
Trusted By Millions
Independent, Expert Android News You Can Trust, Since 2010
Publishing More Android Than Anyone Else
25
Today
144
This Week
399
This Month
5143
This Year
106618
All Time
Advertisement