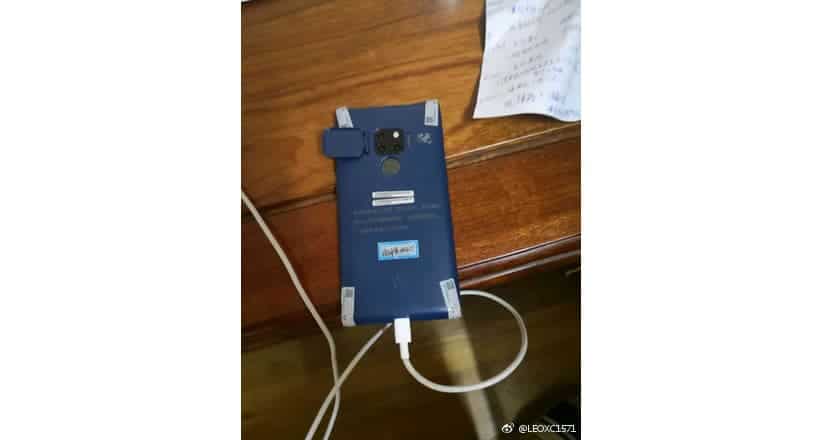 Huawei's Mate 20 leaked online yet again, with an apparent real-life image of the upcoming Android device appearing on Chinese social media earlier today. The photograph that can be seen above is in line with yesterday's leak that suggested Huawei is preparing a different triple-camera arrangement for its next flagship, suggesting a vertical setup has been replaced with a square module that includes a two-by-two grid encompassing three lenses and a dual-LED (dual-tone) flash unit.

While the newly leaked prototype features a matte blue finish, it's presently unclear whether that particular color is meant to be one of the official variants of the Mate 20. The image also provides the first clear look at the fingerprint reader of the device, indicating another conventional circular module is incoming. The Mate 20 Pro is rumored to feature an under-display fingerprint scanner but may end up following the example of the Mate RS Porsche Design which had both an in-screen sensor and a rear-mounted one. The device also appears to be more rectangular than the P20 line Huawei unveiled earlier this year, with recent rumors pointing to a 6.3-inch FHD+ display panel also being part of the package.

The Mate 20 and Mate 20 Pro should be powered by the Kirin 980, the latest system-on-chip manufactured by Huawei's semiconductor subsidiary HiSilicon that's scheduled to be officially announced at the latest edition of Berlin-based IFA on August 31. The triple-camera setup of the Android phablet is likely to be similar to the one used by the P20 Pro, meaning users can expect one high-resolution sensor, a telephoto lens, and a wide-angle module. The Mate 20 line is expected to be announced this fall and become available for purchase by late November, in time for this year's holiday season, traditionally the most lucrative period for consumer electronics makers. The device should round out Huawei's 2018 mobile portfolio that managed to outperform Apple, allowing the firm to become the second-largest smartphone manufacturer for two consecutive quarters.