One of Google’s upcoming flagship handsets, the Pixel 3 XL (crosshatch), has just surfaced on Geekbench. According to the listing, the Pixel 3 XL will be fueled by the Snapdragon 845 64-bit octa-core processor, while it will include 4GB of RAM. The Geekbench listing also mentions that the device will ship with Android 9.0 aka Android P, which is something we already knew, as it will probably become the first phone to ship with Android 9.0, in addition to its sibling, the Pixel 3.

Now, Geekbench also shared benchmarking scores of the Pixel 3 XL, the device was able to score 2,426 points in the single-core test, while it hit 8,355 points in the multi-core one. The listing dates back to August 1, but it just started making rounds. The Google Pixel 3 XL is expected to arrive in October this year, one year after the Pixel 2 and 2 XL dropped. The Google Pixel 3 XL will launch alongside its sibling, the Pixel 3, which will be smaller than the Pixel 3 XL. The Pixel 3 XL actually surfaced a couple of times thus far, and it seems like it will resemble its predecessor, at least as far as the back side design is concerned. The Pixel 3 XL will sport a display notch, and that was not the case with its predecessor. If leaks are to be believed, the Pixel 3’s bezels will be a bit thicker than Pixel 3 XL’s, but a display notch will not be a part of the package.

Leaks are suggesting that the Pixel 3 XL stick to a single camera on the back, despite the fact most phones switched to at least two at this point. Despite the fact the Pixel 2 XL has a single camera on the back, and was released almost a year ago, it’s still regarded to be one of the best camera smartphones out there, so sticking to a single camera may be the best thing for Google, as the company relies on software more than anything else. The Pixel 3 XL may sport two front-facing cameras, though, while the device is expected to retain stereo speakers as well. The Pixel 3 XL will ship with an AMOLED display, quite probably a P-OLED panel, and its frame will be made out of metal. More Pixel 3 XL rumors and leaks are expected to drop soon, as the phone’s launch is getting closer by the day. 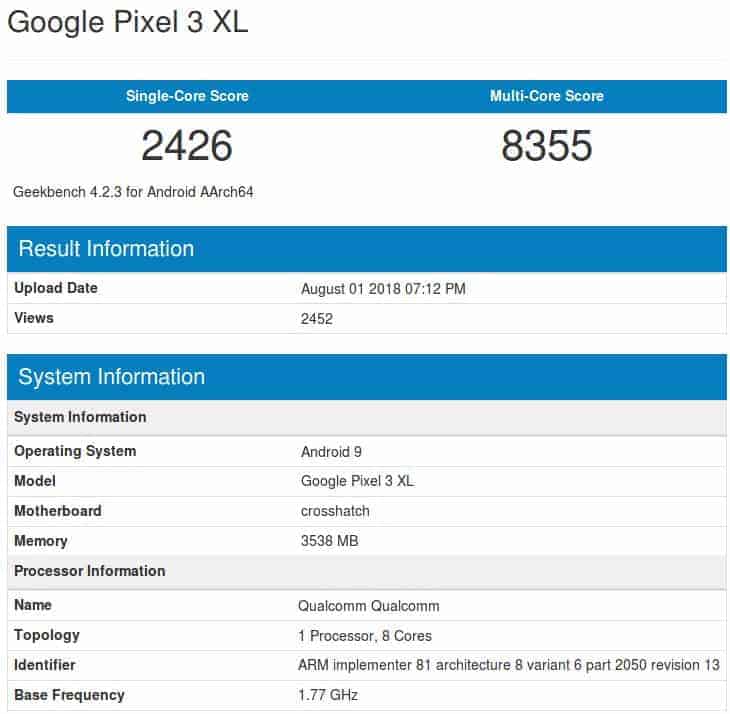