It seems like the Google Pixel 3 and Pixel 3 XL will be announced on October 4, at least according to a new piece of info that just surfaced. This Is Tech Today YouTube channel has spotted the said release date in an ad posted by Google on its own Famebit website, and that ad implies that the Pixel 3 and Pixel 3 XL are coming on October 4. Interestingly enough, the first-gen Pixel phones, and the second-gen Pixel devices all launched on October 4, so this is not exactly surprising.

Now, for those of you who do not know what Famebit is, it’s a website which works to connect advertising agencies and marketers with content creators to coordinate promotional materials. The source cannot verify that Google shared the aforementioned date, in other words, created the ad in question, but it’s highly likely that the two phones will drop on October 4. Google will probably confirm the release date no sooner than September, quite probably in mid-September once IFA 2018 in Berlin comes to an end. In any case, the Pixel 3 and Pixel 3 XL had surfaced in a number of images thus far, while some additional info also popped up, so we pretty much know what to expect out of the two phones.

The Google Pixel 3 XL will probably feature a display notch, while the Pixel 3 will not, but its bezels will be a bit thicker because of it. The Pixel 3 and Pixel 3 XL will resemble their predecessors, if leaks are to be believed, and we’re primarily talking about their back sides. Both devices are expected to sport a single camera on the back, and they’ll almost certainly sport the same camera setups. Android P aka Android 9.0 will come pre-installed on both devices, as the Pixel 3 and Pixel 3 XL are expected to become the first two phones to ship with the newest version of Google’s operating system. 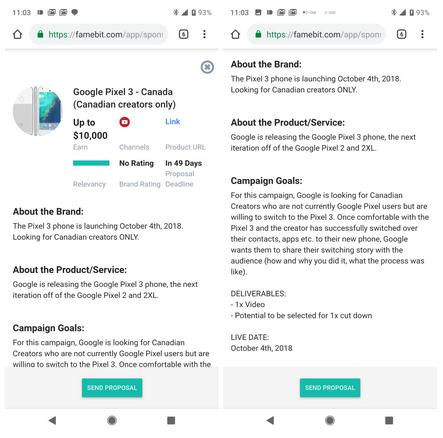