A likely variant of the Sony Xperia XZ3 with the model number H8416 recently appeared on the database of the popular benchmark application Geekbench. The same model of the Xperia XZ3 also appeared on the website of the GFXBench benchmark app last June. The listing on Geekbench’s website confirms earlier reports and benchmark results which state that the handset will be powered by the Snapdragon 845 chipset from Qualcomm. However, in contrast to recent rumors and benchmark listing which claim that the Xperia XZ3 will have 6GB of RAM, the Geekbench results show that the handset will only include 4GB of RAM.

In addition, the Geekbench listing also states that the Sony Xperia XZ3 will ship with Android 9 Pie pre-installed, which means that the users of the device will be able to take advantage of features like Adaptive Battery, new screenshot tools, and modified notification management. The Adaptive Battery functionality uses artificial intelligence to determine which applications are not commonly used, and the operating system will then limit the resources that these apps can use, which should result in the improved battery life of the device. The latest version of Android OS also includes a new screenshot notification that permits users to share, edit, or delete the image directly on the notification shade. Android Pie also allows users of the Xperia XZ3 to choose which applications can send notifications.

Previous reports have already provided detailed information regarding the design and specifications of the Xperia XZ3. Sony’s upcoming smartphone offering will reportedly contain either 64GB or 128GB of internal flash storage, which could be expanded using a microSD card with a capacity of up to 512GB. Furthermore, recent rumors state that the device’s rear camera will be equipped with Sony’s own 48-megapixel IMX586 sensor. The device is expected to ship with a 5.8-inch display with a resolution of 2160 by 1080 pixels and an aspect ratio of 18:9. The handset will reportedly include a 3,180mAh battery, and it is expected to contain a fingerprint scanner located below the rear camera. Previous reports further claim that the Xperia XZ3 will be available in four color options, namely dark red, black, white, and green. 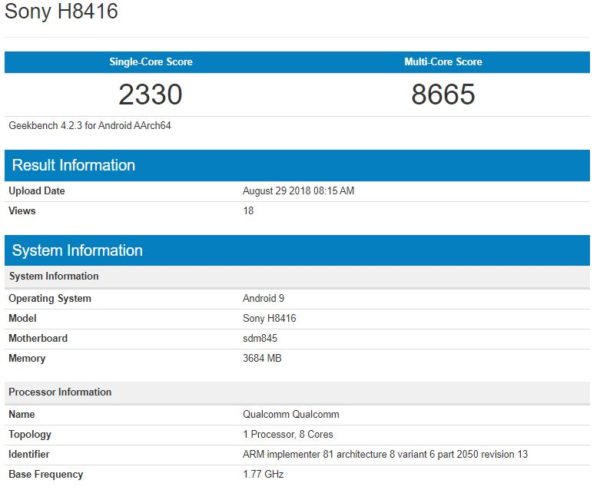