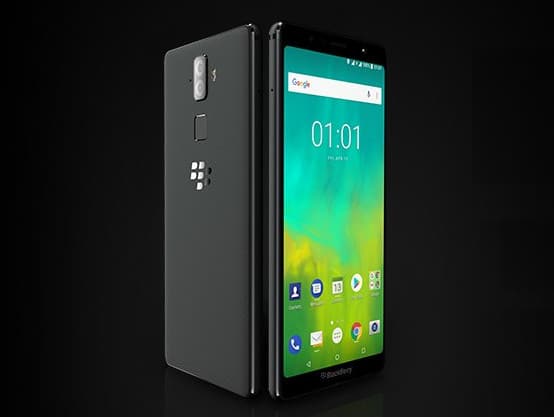 BlackBerry has been teasing its Evolve and EvolveX smartphone recently, and both handsets are now official. As expected, both of these smartphones were introduced in India, and we still do not know if they will reach other markets. These two handsets have been released by Optiemus in India, and they look the same, though there are some differences under the hood that are worth mentioning.

Let’s kick things off with the design, both phones sport rather thin bezels for mid-range handsets, though those bezels are still there and quite visible, especially the ones above and below the display. BlackBerry’s logo is included both on the front and back sides, while a dual camera setup is included on these two handsets. A fingerprint scanner sits below the dual camera setup, and a dual-LED, dual-tone flash is placed right next to those two cameras. All the physical keys are placed on the right-hand side of the Evolve and EvolveX, while a SIM card tray is accessible from the left. The display on the Evolve and EvolveX sports rounded corners, and it seems like BlackBerry once again opted for a grippy, soft-touch back panel.

The BlackBerry Evolve features a 5.99-inch fullHD+ (2160 x 1080) display with a 2.5D curved glass on top of it, and Corning’s Gorilla Glass 5 protection. The device is fueled by the Snapdragon 450 64-bit octa-core processor, while it comes with 4GB of RAM and 64GB of expandable storage. Android 8.1 Oreo comes pre-installed on the device, along with BlackBerry’s launcher, while the device offers two SIM card slots (2x nano SIM, hybrid setup). Two 13-megapixel cameras sit on the back of the phone, while a single 16-megapixel camera is included on its front side. A 3.5mm headphone jack is a part of the package, as is FM Radio. A 4,000mAh battery sits on the inside of this phone, and it supports Quick Charge 3.0, while Bluetooth 5 LE is also included in the package.

The BlackBerry EvolveX has the same display as the Evolve, while the two phones share a number of other internals as well, but the EvolveX comes with a more powerful SoC, more RAM, more capable cameras, and Dolby Atmos support. The device is fueled by the Snapdragon 660 64-bit octa-core processor, and it includes 6GB of RAM on the inside. 12 and 13-megapixel cameras sit on the back of this phone, and the device supports wireless charging, which is also a feature that is not available on the regular Evolve model. These two smartphones are priced at Rs. 24,990 ($365) and Rs. 34,990 ($511) in India, and will be available exclusively via Amazon India. The BlackBerry EvolveX will go on sale from the end of this month, while the Evolve will become available in mid-September.