Google officially introduced the latest version of Android today, Android 9 Pie, along with confirming the start of the rolling out of Pie to Pixel phones. While this is a new Android version, most of the features are already known due to the previous developer releases of Pie – when it was more simply known as Android P. However, there is one new feature coming with Pie that had not been officially announced before, Slices.

Pie Slices seems intended to increase the level of integration between Android apps and Google Search – although it might not be resigned to just Google Search. At present, Google has not provided detailed information on Slices, but did provide one example which offers some context. The example revolves around the Lyft app and essentially highlights how if a Lyft user was to search using the term “Lyft,” in addition to the more traditional results that would appear, some of the Lyft app UI would also be shown in the Search results. Again, in the limited example given, the results would draw on the app interface to highlight how much a Lyft ride is from the user’s current location to their ‘home’ location, as well as provide detailed information on how far away the nearest available Lyft driver is. The key to this feature being the provision of “relevant information,” according to Google.

Which means this is designed to be a highly individual Search-related feature as it will be pulling the information it knows about the user, such as current location, home location, and so on. Likewise, this also highly suggests the feature only works for apps a user has installed in the first place with this marking the latest move by Google to try and bridge the gap between Android apps and a browser experience – following on from the likes of Progressive Web Apps (PWAs), and Trial Run Ads. The latter of which is slightly different, as in spite of letting users test-run an Android game app in a browser, its ultimate goal is to push the user towards downloading the app, while Slices is designed to surface already-downloaded app content. Although this is being pushed as a Pie launch feature, Google has confirmed it’s not quite ready for mainstream use yet, and therefore is not rolling out along with the initial availability of the final version of Android 9 Pie. Instead, Slices is due to become available “later this fall.” Below is a visual example of how Slices will look and work. 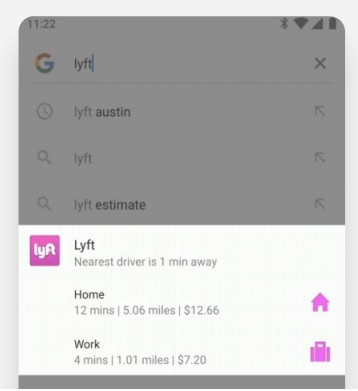