While most of the attention is currently going toward the upcoming Galaxy Note 9 flagship, Samsung’s mid-rangers are also drawing plenty of interest, offering solid specs at an affordable price point. The 2018 Galaxy J line made its debut last month, with the Galaxy J3 and Galaxy J7 hitting several carriers in the United States. The Galaxy J7 (2018) is the higher-end of the two, albeit that doesn’t mean that it packs high-end specifications. It’s a mid-range smartphone by all means, but should nonetheless deliver a decent experience at a budget-friendly price point.

The 2018 Samsung Galaxy J3 went on sale at Verizon in late June, and it now looks like the Galaxy J7 (2018) will join the carrier’s portfolio soon enough as well. A new entry in the database of popular benchmarking tool Geekbennch shows a device with model number SM-J737V, which will reportedly go on sale at Verizon as the Samsung Galaxy J7 Aero. The benchmark listing offers a glimpse of the smartphone’s core specifications, including the processor, RAM, Android version, and performance in both single-core and multi-core tests.

The upcoming Galaxy J7 Aero for Verizon will seemingly have an octa-core Samsung Exynos 7885 processor paired with 2GB of RAM, based on this benchmark. The Exynos 7885 is the same processor powering other Samsung mid-rangers such as the 2018 Galaxy A8 and Galaxy A8+, or the Galaxy J7 Duo. Just 2GB RAM seems low by today’s standards, but the benchmark doesn’t guarantee that the specs are final or that this is the only configuration. That said, the Galaxy J7 Aero could also come in a variant with 3GB of RAM.

In terms of software, the Galaxy J7 Aero is listed with Android 8.0 Oreo on board out of the box. Should this version have the same specs as the standard model, the Galaxy J7 Aero will have a 5.5-inch Super AMOLED display with an HD resolution, microSD support for additional storage of up to 256GB, 13-megapixel cameras on both its front and back, and microUSB 2.0. Geekbench lists the Galaxy J7 Aero with a 1,167 score in single-core tests and 3,979 in multi-core. There’s no mention yet regarding when the Galaxy J7 Aero will go on sale at Verizon, but the benchmark listing indicates that its release is just around the corner. 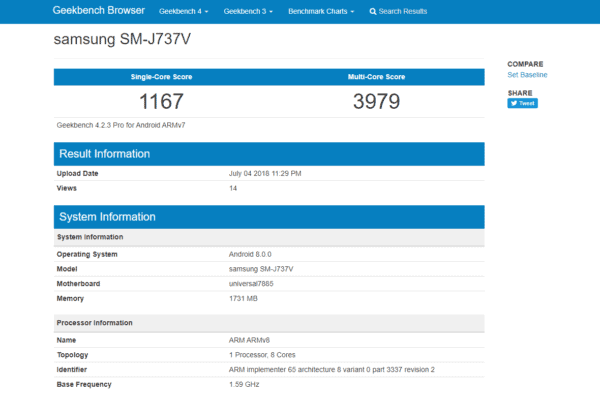