Sprint has just debuted a slew of new unlimited data plans, bringing the total number of plans to four. There’s now the Unlimited Basic and Unlimited Plus for everyone. Then there’s Unlimited Military for those in the military and then Unlimited 55+ for those that are a bit older. The new additions here are the Unlimited Basic and Plus plans, that start at $32 and $42 per month when you have five lines on Sprint’s network. These plans will be available beginning tomorrow July 13.

There are four main differences between the two new plans. That is the fact that Unlimited Basic gives you 500MB of LTE data for mobile hotspot, video streams at 480p, and you get 5GB of LTE data in Canada and Mexico. As well as free Hulu included. All of this for $32 per line if you have five lines, but starting at $60 for a single line. Now Unlimited Plus offers 15GB of LTE for mobile hotspot, full HD streaming (1080p), 10GB of LTE data in Canada and Mexico and you get Hulu and Tidal included for free. This is $42 per line on five lines, but it also starts at $60. However the second line is twice as much as the second line on the Unlimited Basic plan.

Now if you’re a military member, as a veteran, active duty or reserves in the US armed forces, you can get the Unlimited Military plan that starts at $60 per month for one line, with the second costing an additional $20 and $10 for each line after that. This comes with 500MB of mobile hotspot, 480p video streaming, 5GB of LTE data in Canada and Mexico, and of course unlimited talk, text and data. For those that are over 55, there is the Unlimited 55+ plan that offers everything the Unlimited Military plan does, but for $35 per month, per line for two lines. However this plan is only available in store.

Sprint has gone out and given more options for its customers, so you can choose to pay less if you don’t need as much mobile hotspot, or don’t care about video streaming quality. And also a few options for those that are in the Military, as many carriers are now doing. These plans will all be available beginning tomorrow. 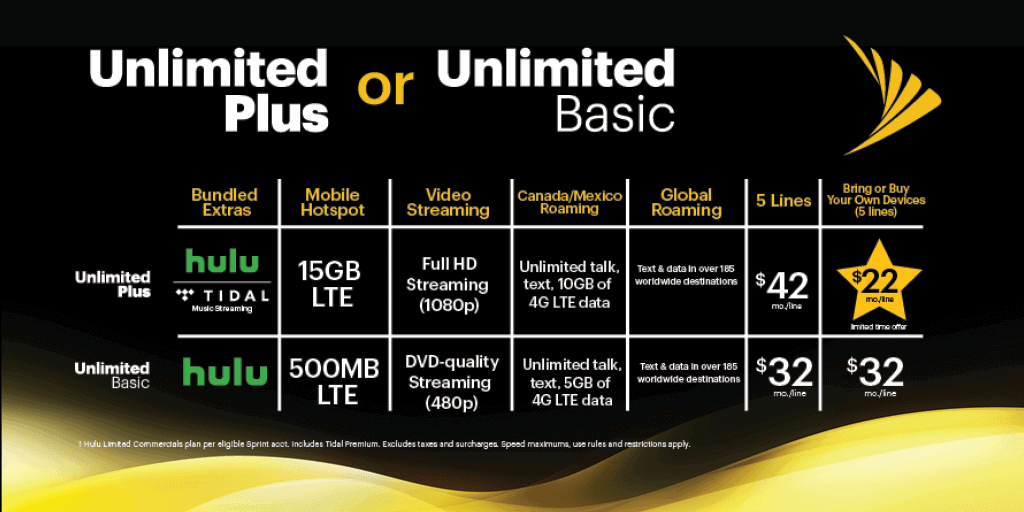