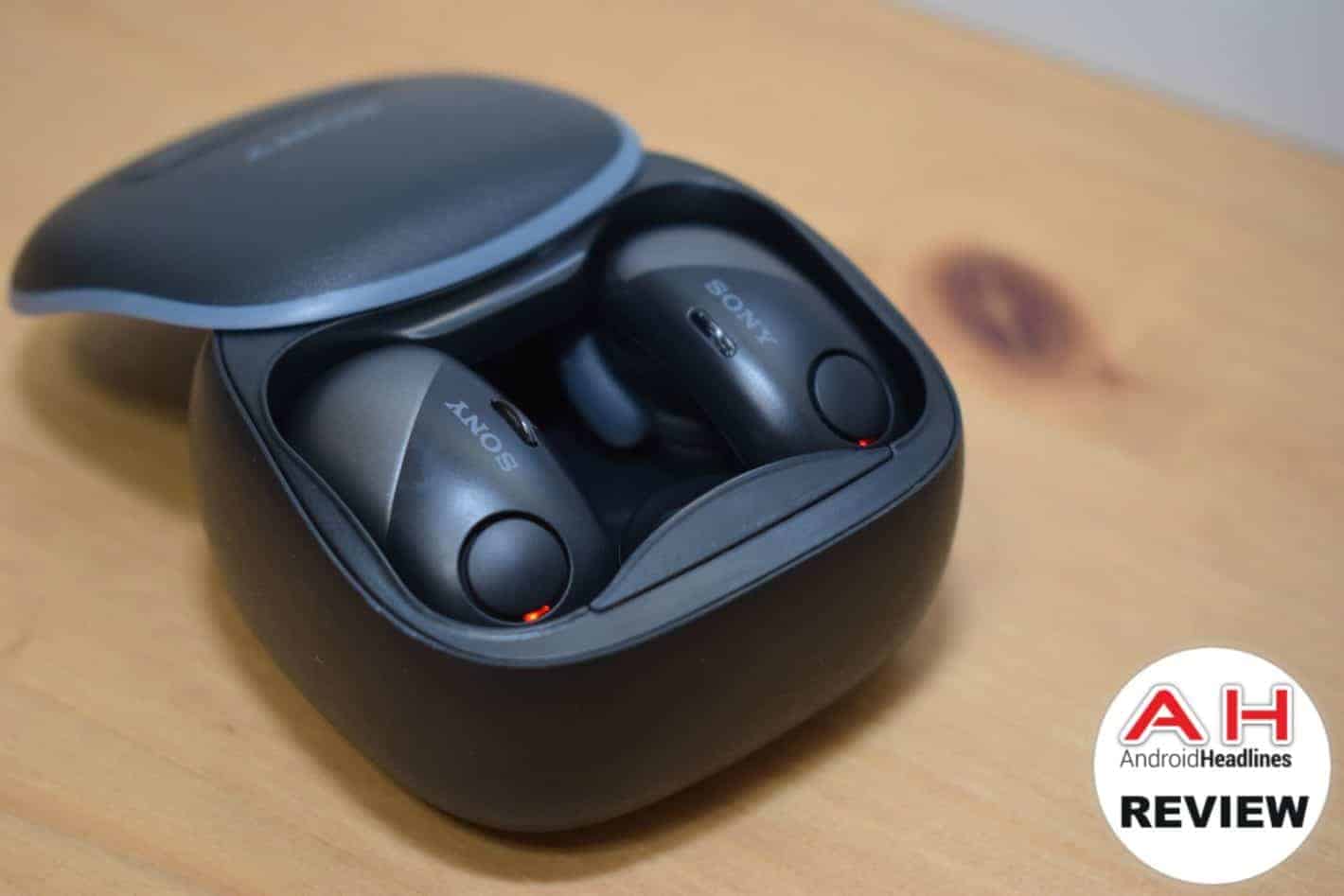 Sony’s first attempt at a pair of truly wireless headphones impresses and checks almost every box.

Sony is one of the more underrated names in audio right now. And that’s because people think about Bose and Beats as the big headphone and speaker makers, but Sony has a hand in the game as well, and does make some really great options for those looking for a new pair of headphones or Bluetooth speakers. Sony has now come out with its own pair of truly wireless earbuds here, which is the company’s first, and it’s a trend that the industry is following. It’s the WF-SP700N, which is a bit of a weird name here, but that’s how Sony names all of its audio products, so no surprise here. These cost $179, so they aren’t the cheapest pair of truly wireless earbuds, but they are priced pretty competitively still. But the real question here is whether they are worth it. Let’s find out. 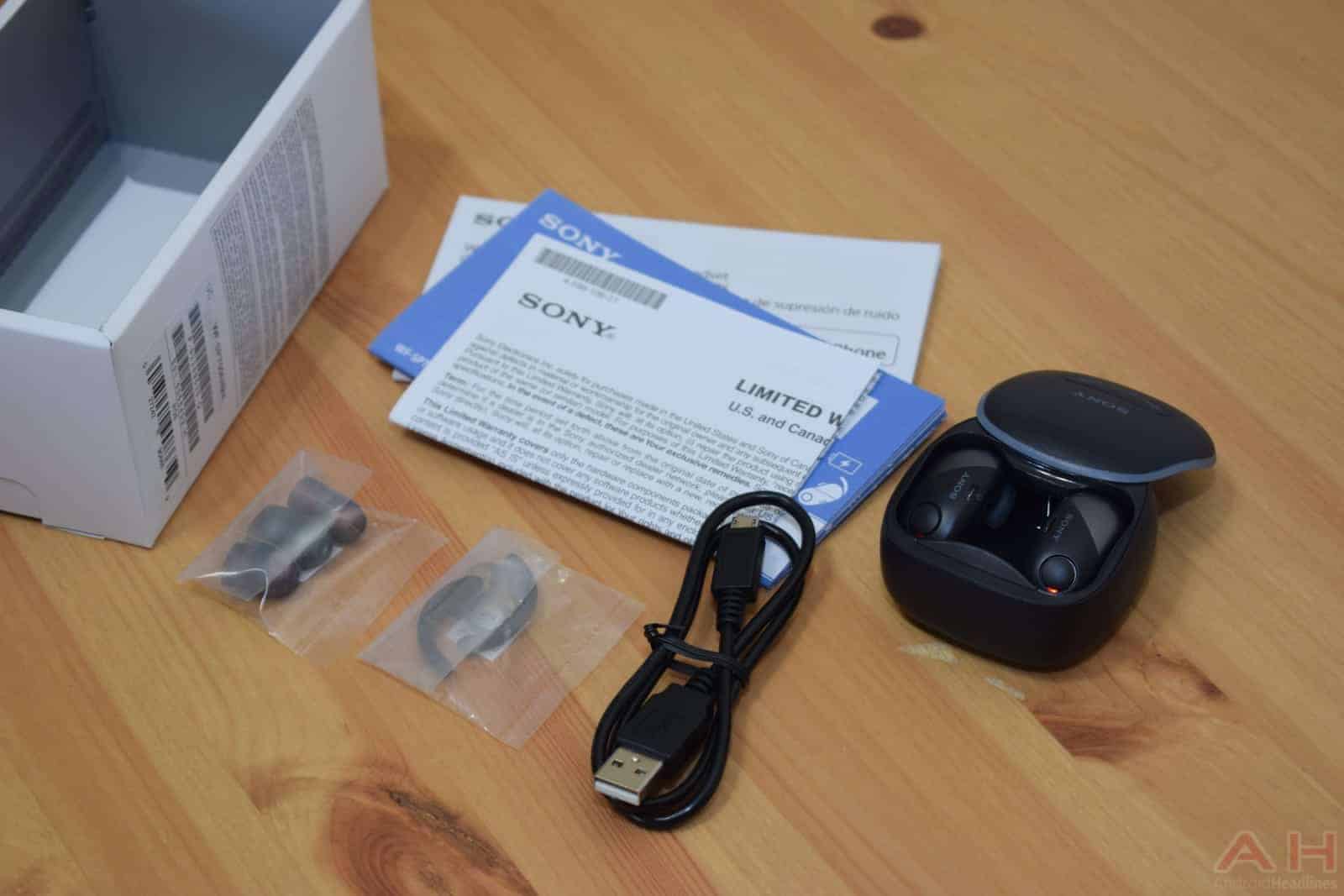 The packaging here is pretty minimal, Sony does include everything you’ll need here but without using any fancy packaging. Which is perfectly fine, as you’re not going to spend much time with the actual packaging here. But inside, Sony includes three sets of ear tips – because everyone has different sized ears – as well as wing tips, a micro USB cable and then the charging case for the headphones. The wing tips aren’t for everyone, but you can use them to help keep the SP700N in your ears while you are running. The charging case is pretty much a staple for truly wireless earbuds, it helps you keep track of them, but also charges them when they are not in use, so you always have a full charge. 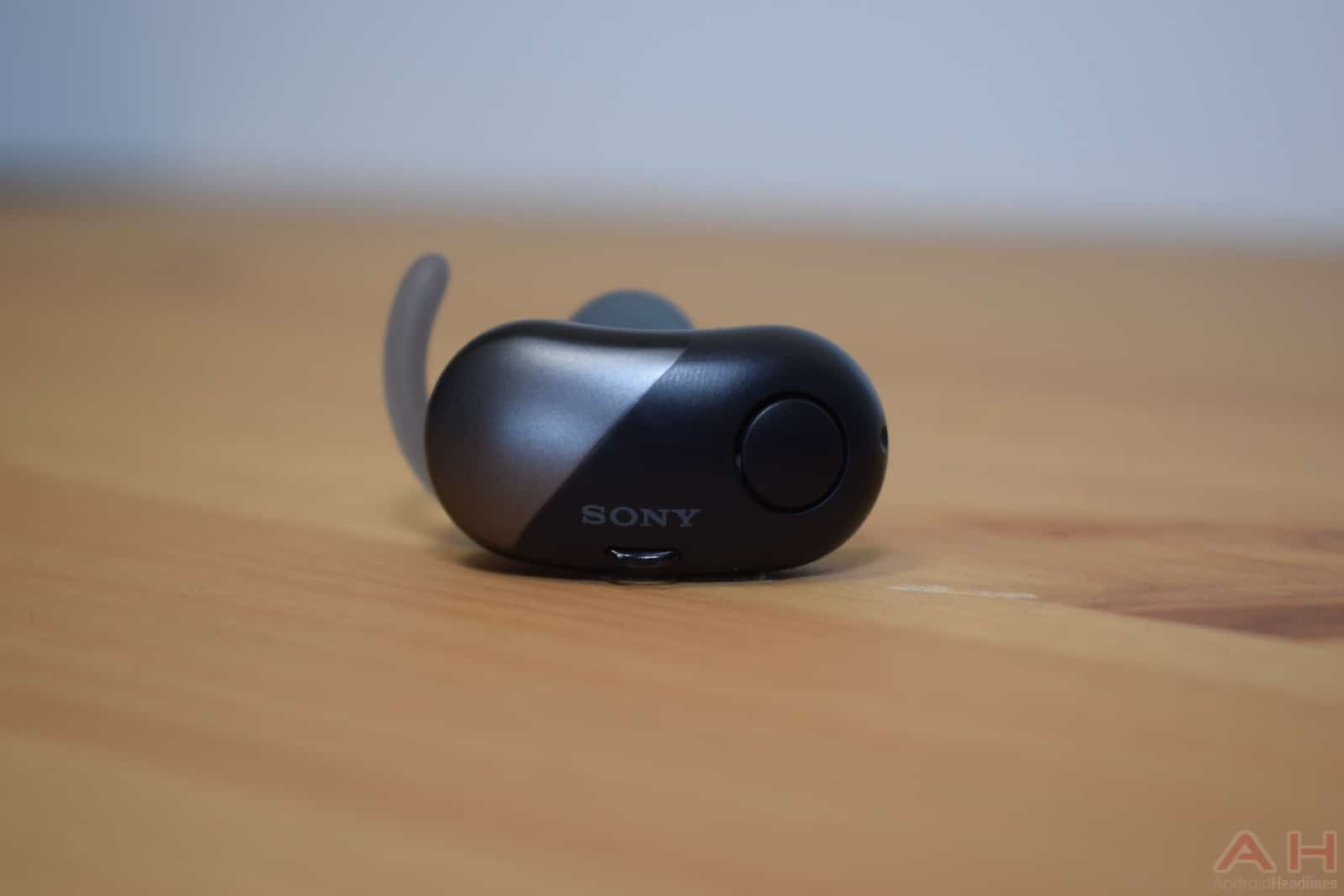 Sony is pretty well-known for its build quality, on all of its products. And its headphones are no different. This pair of headphones is actually plastic, but that’s a good thing here. That keeps the SP700N’s pretty lightweight, so they feel more comfortable in your ears and are less likely to fall out. It also allows Sony to add larger drivers and bigger batteries in these headphones, which is also important. Now the design here is actually a bit different from other truly wireless earbuds. Most try to fit in your ear, but these actually hang out and are slightly curved to fit your ear. This makes it seem like they are going to fall out pretty easily, but I can say, after using these for nearly a month, that is not the case. These are actually really comfortable to wear for hours on end, and they never felt like they were going to fall out of my ears.

On the outside of the earbud, you’ll find a button on either side. The right side is for playing and pausing music, while the left side is for turning off noise cancellation or ambient sound. Otherwise, there are no buttons located on the SP700N, as Sony has opted to keep these looking pretty nice. These buttons do also work to power on or off the earbuds, simply long pressing either of them to turn them off. This works well if you want to use just one at a time as well. It’s also worth mentioning that these will automatically turn off when you put them in the case and automatically turn on when you take them out to put in your ears. 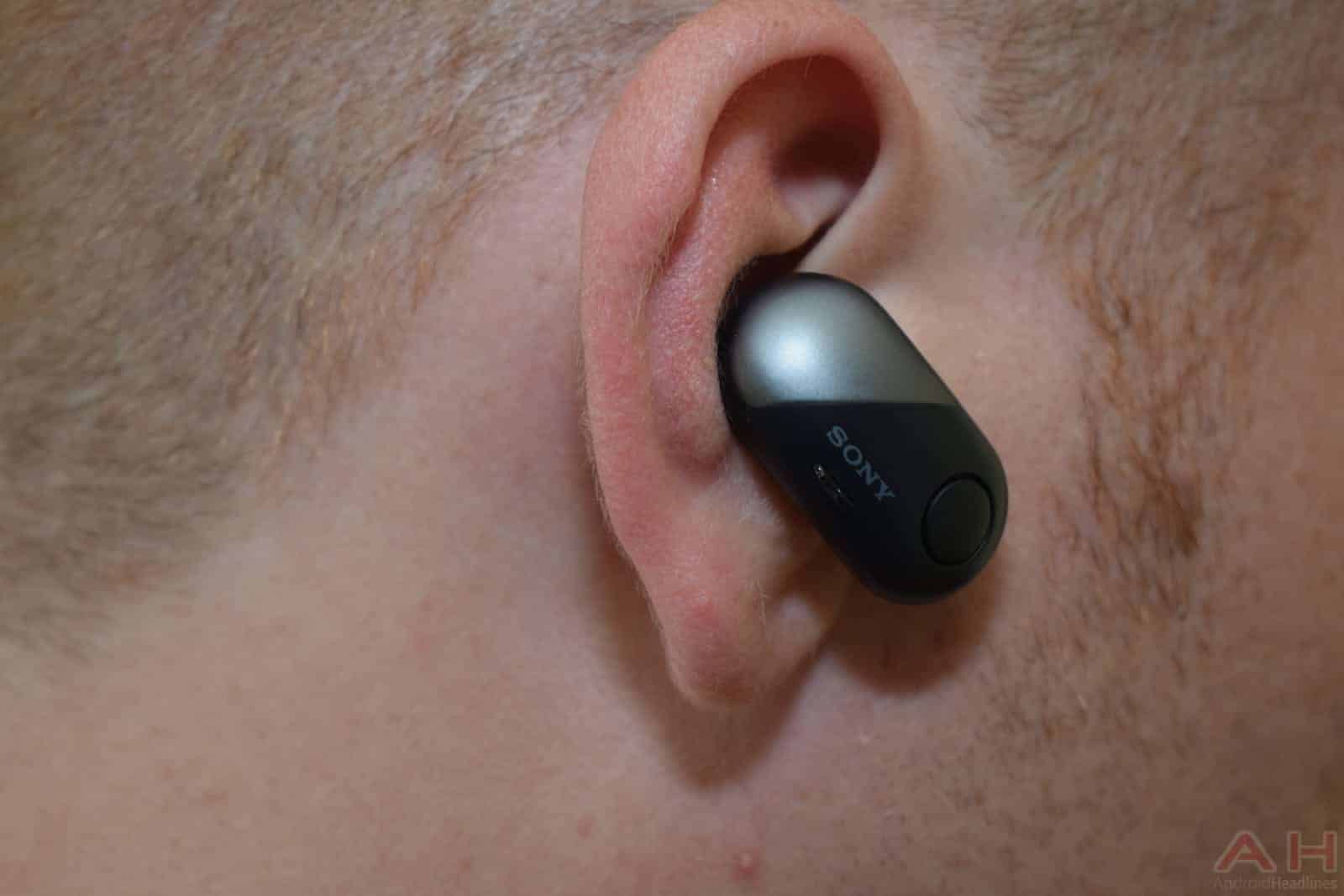 Now, the case is also a pretty important part here. As this is what you’re going to be storing the SP700N earbuds in, to carry them around. But it is also how you’re going to charge them. The case is also plastic, but it’s small and lightweight as well. So you can toss it in your gym bag and you’ll be good to go. The cover on this case swivels around to present the earbuds. It’s something that other truly wireless headphone companies haven’t done, so it’ll be interesting to see whether that breaks over time or not. There is a possibility that it could, but so far in our testing, it hasn’t broken or anything of the sort.

The build quality is top notch from Sony as always. These are a great looking pair of earbuds that are also pretty lightweight, which is also hugely important for a pair of headphones. Especially if you are taking these on a run or to the gym for a workout. You need a lightweight pair of headphones, as they are less likely to fall out, or be uncomfortable to wear. 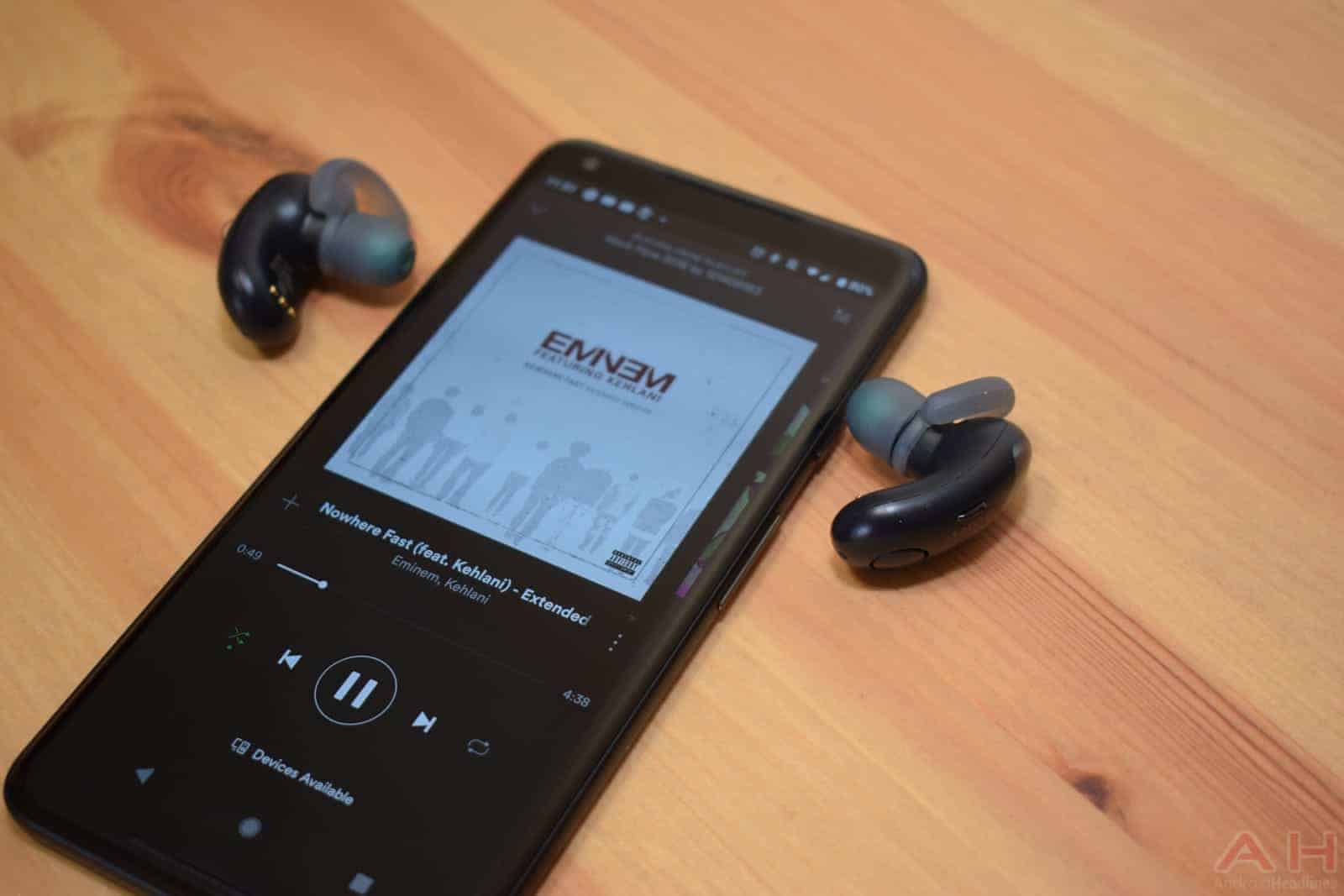 While the name doesn’t indicate it, the SP700N are actually part of Sony’s EXTRA BASS lineup, which means you are going to get a ton of bass out of these earbuds here. Of course, that bass level can be adjusted in the Headphone Connect App that Sony has, which we’ll talk about a bit later on. But you’re going to get some nice, full sound out of these headphones, which is really nice to have here. The mids and highs are still crystal clear, while the lows are really boomy. If you listen to some music that has a ton of bass in it, you’ll really be able to appreciate the bass that Sony has included here.

While the EXTRA BASS feature is great for listening to music, it doesn’t overpower the mids and highs when you are listening to something else, like podcasts. Instead, the voices still come in nice and clear. The audio quality coming from the SP700N is actually pretty impressive, whether you are jamming out to your favorite tunes, or listening to audiobooks and podcasts. It is actually one of the best pairs of truly wireless earbuds we’ve tried, from an audio quality perspective. These get louder, have richer audio and it’s just a better audio experience. But that has an effect on battery life, unfortunately. 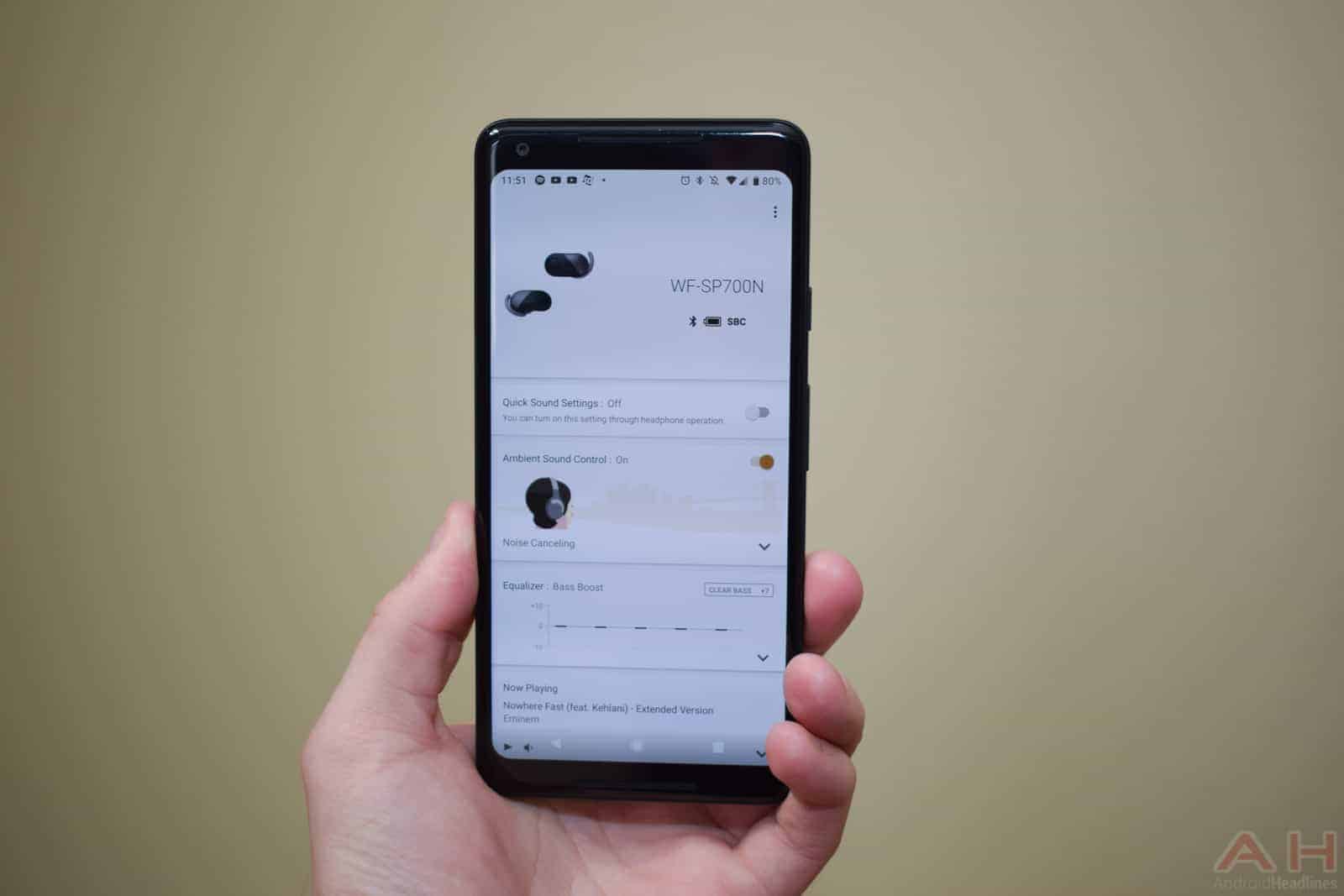 With larger drivers, come smaller batteries, unfortunately. And the SP700N has a far shorter battery life than most other truly wireless earbuds on the market right now. Sony rates the SP700N as lasting around three hours of continuous playback. That’s shorter than the Bose SoundSport Free, which used to have the shortest continuous playback battery life in the market, at four hours. As many companies do, Sony focuses on the nine-hour figure, which takes into account, using the charging case to recharge the SP700N’s. That means it can fully charge the headphones twice before it needs a recharge itself. That actually is pretty low as well, but that is also because this case is smaller and lighter than many others on the market. So that’s the price you have to pay for having lightweight headphones and a carrying case, with great audio quality. During the review process, we typically were able to get around two to two and a half hours of battery life on a single use, and had to recharge the battery case after a few uses. Which is a little shorter than what Sony promised.

Bluetooth isn’t as stable as plugging in a pair of headphones to your smartphone. But the good thing is, Bluetooth has gotten far more stable over the past few years. During the review period with the SP700N, we did not experience any disconnects at all with the headphones and the phone it was connected too (a Pixel 2 XL and a ZenFone 5Q). Which is definitely a good thing here, considering a number of truly wireless earbuds do have the issue of one earbud losing connection while the other stays connected to your phone. This happened with the JayBird RUN (which JayBird later fixed in a software update), but it was a pretty annoying issue, and it’s good to see that’s not an issue with the SP700N here.

Finally, on the connectivity front, Sony has its Headphones Connect App available for the SP700N. With this app, you won’t be able to do a whole lot here. The big change that you can make is with the EQ. You are able to adjust the equalizer to your liking. There are a few different presets available, but you can also adjust the lows, mids and highs to your liking as well. You can also opt to turn off noise cancellation or ambient sound, but that can also be done on the headphones themselves using the button on the left earbud. 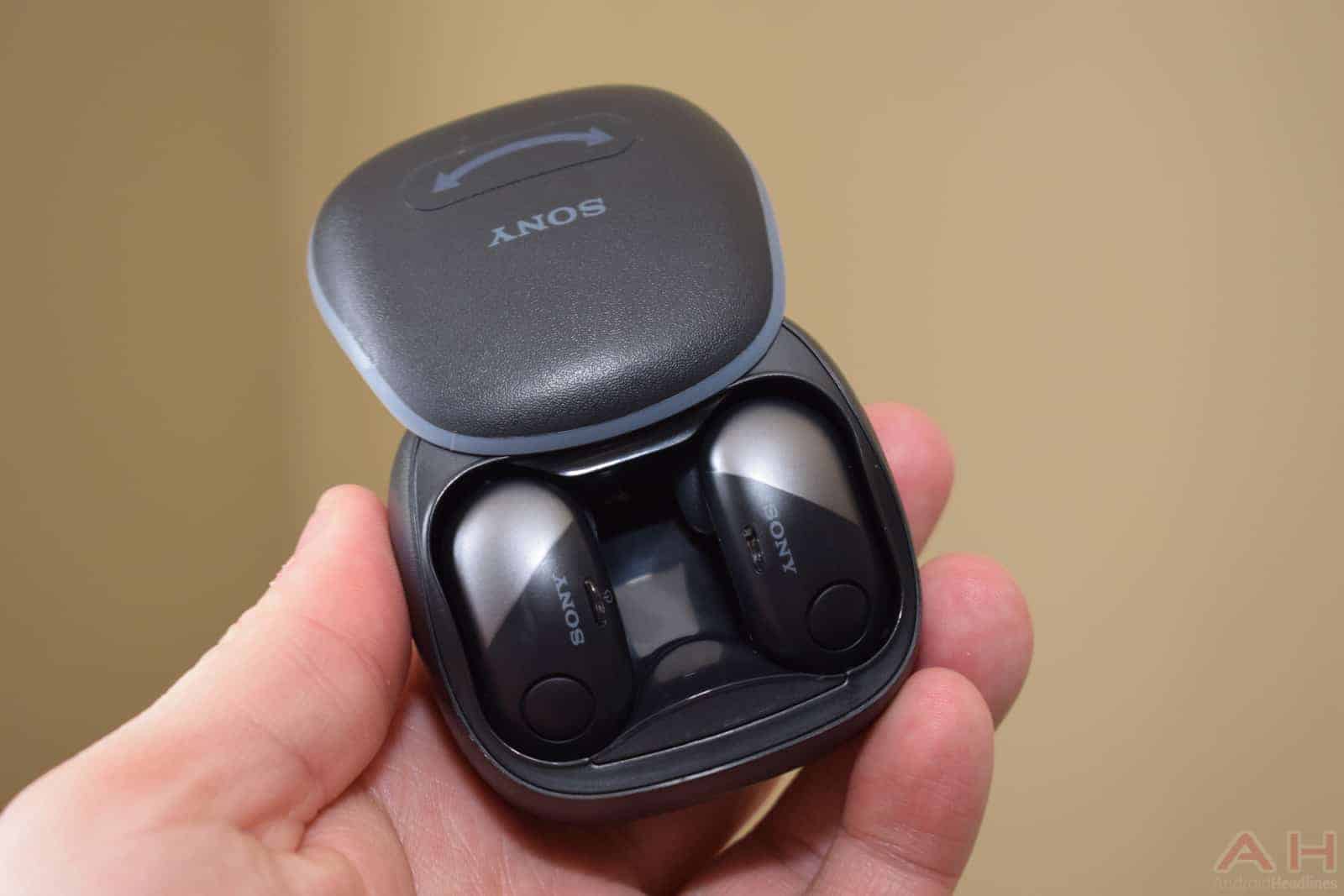 The Sony WF-SP700N are actually a really impressive pair of truly wireless earbuds. These are perhaps the best model that we have tried so far. The only real downside here is the battery life. But even at three hours of continuous playback, it’s pretty decent and should last through a full workout or run without any issues, and you’ll get some great-sounding music. Just remember to charge these often and keep that charging case with you. At $179, these are definitely worth picking up right now, considering many other truly wireless headphones have that price attached to them, if not more, making these a steal. And you can already pick them up from Amazon by using the link down below.