Some Samsung Gear S3 owners have been struggling with a battery bug since last year, and a new update now finally addresses the issue. The Gear S3 smartwatch hit the market back in 2016 and it proved to be a fairly popular device with a solid performance. When the Tizen 3.0 update rolled out in early December 2016, however, a bug started affecting the device’s battery performance. More specifically, the smartwatch would no longer be able to charge to 100 percent in one session, as it would start issuing overheating warnings when it reached roughly 90 percent. Users had to stop charging it, let it cool down, and then plug it back in so it could reach 100 percent. It may not be a major issue like the exploding battery of the Samsung Galaxy Note 7, but it was still frustrating and persistent.

The issue did not affect all Gear S3 devices, but it did seem widespread enough. Affected Gear S3 owners took to forums and other online venues to report on the matter, and Samsung has been working on it for a while now. The company has already released a number of updates since the bug was first reported, aiming to address the battery performance, but based on user reports those updates did not work for everyone. In addition to not charging to 100 percent in one session, the Gear S3 also had a worse battery performance overall after the Tizen 3.0 update. Samsung has now issued a new update that reportedly changes the algorithms used for battery charging, and this time it should solve the problem for all Gear S3 owners.

For the Gear S3 Frontier, the update comes with build number R760XXU2CRG3. For the Gear S3 Classic, the build number for the latest update is R770XXU2CRG3. Both packages weigh in at 16MB each. Besides the battery fixes, the update also brings various stability improvements to enhance the overall experience. To download and install the latest update for the Samsung Gear S3, open the Samsung Gear app on the paired smartphone, access the Settings tab, and head over to the About Gear section where you will find an option to Update Gear Software. 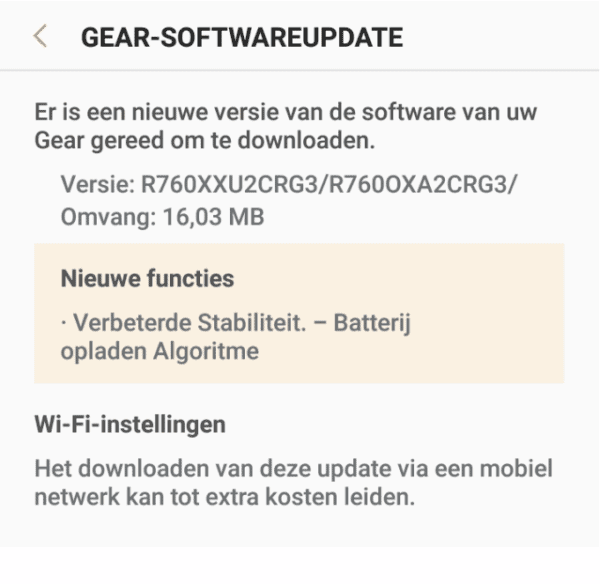