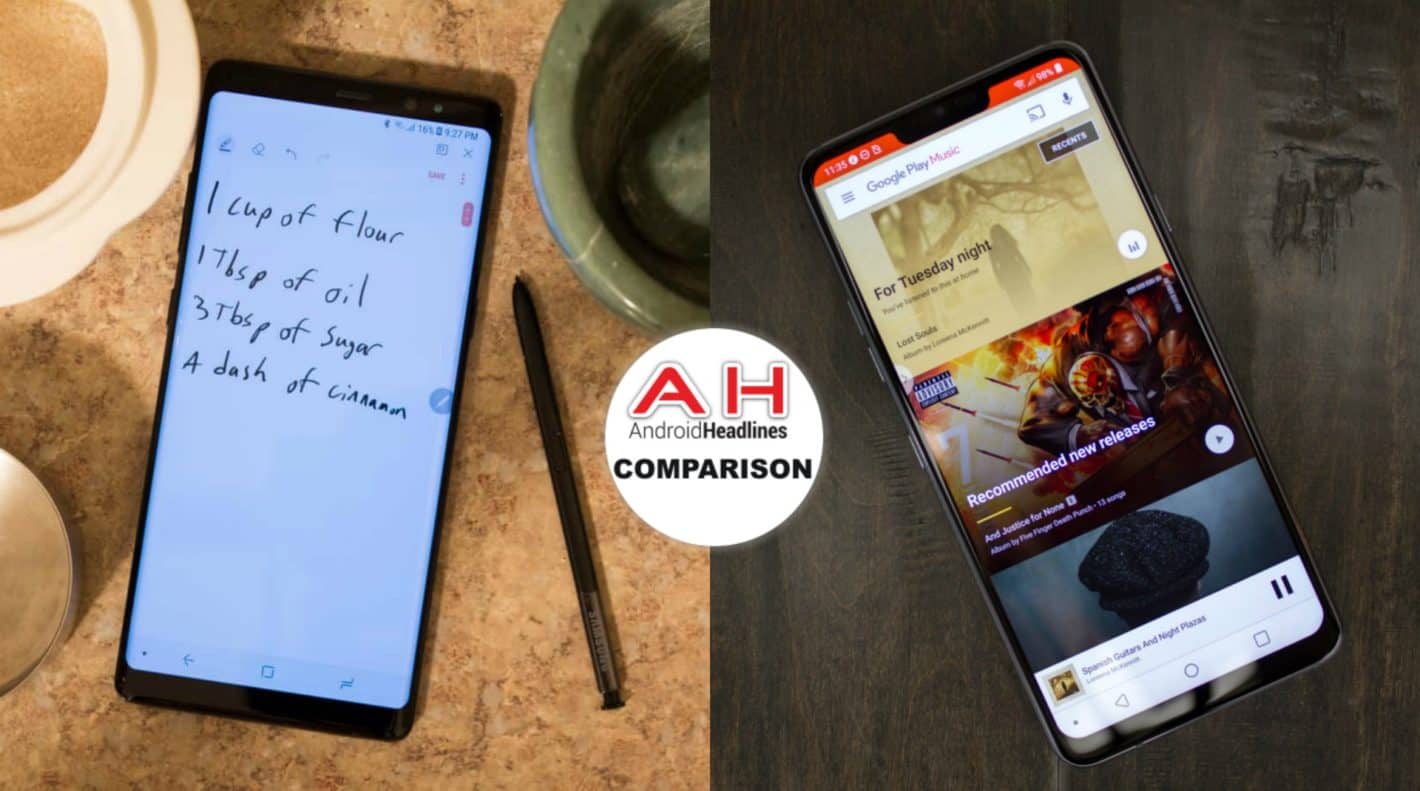 Do we have a good one for you today – the Samsung Galaxy Note 8 goes head-to-head with the new LG G7 ThinQ. Does the Galaxy Note 8, which debuted in August 2017, still have what it takes to beat out one of the newer devices from LG? Is it time for Galaxy Note 8 owners to upgrade to the Galaxy S9 Plus or wait for the new Galaxy Note 9, or should the LG G6 owners upgrade to the new G7 ThinQ? These questions and more are what we hope to answer in this comparison. Both devices look the part of a flagship smartphone with their extended aspect ratios and small bezels. With discounts on the Note 8, pricing is similar for each device. The Note series and the LG G series are designed for different audiences, so it will have to come down to brand, design, and individual features.

The displays are almost the same size, with the Note 8 coming out a little larger. They both use the QHD+ resolution, an 18.5:9/19.5:9 aspect ratio, an Always-On display, and both are protected by Gorilla Glass 5. They both use a Snapdragon processor and Adreno GPU, but different models. Both use a base of 64GB of storage and both are expandable via a microSD Card. The Note 8 and G7 ThinQ each boast a dual rear camera setup and an 8-megapixel front-facing camera (FFC). The batteries are close in size and non-removable and both have a rapid charge system and wireless charging. They have the usual suspects – Wi-Fi, Bluetooth v5.0, a 3.1 USB Type-C port for charging and data transfer, IP68 certification, Google Pay, Hi-Res audio, 3.5 mm headphone jack, rear-mounted fingerprint sensor, and facial recognition.

Please take a careful look at the detailed specifications comparison chart below so you can see just how these two high-end smartphones stack up against each other. After that, we will look at each mobile offering in more detail and point out some of its pros and cons. From all of this information, we will try to determine the winner based on overall specs, as well as the execution of design and functions.

Galaxy Note lovers were happy that Samsung decided to release the Galaxy Note 8 after the Galaxy Note 7’s troubles in 2016. The Note 8 is a modernization – it now includes the Infinity Display, finally did away with the Home button in favor of onscreen buttons that only show up when you need them. The narrow, bottom bezel is just that, a bezel with no outwardly function. The narrow top bezel handles the earpiece/speaker, notification light, proximity sensor, the iris scanner, and the FFC which also handles facial recognition. The fingerprint sensor was moved to the far right of the LED Flash to make it harder to smudge the camera lens. Samsung made its yearly improvements to the display and the S-Pen and its software to make it easier to use and add more productivity.

The display size jumped from 5.7-inches on the Note 5, to 6.3-inches. It now uses Samsung’s great Infinity Display, the 18.5:9 aspect ratio, and a QHD+ resolution with 2960 x 1440 pixels giving us a 521 PPI. The Note 8 uses the Always-On technology to save battery life and to make it easy on the user to decide if they really want to turn-on their device to read the full notification. Gorilla Glass 5 protects the front and the back of the Note 8.

The Galaxy Note 8 uses the Qualcomm Snapdragon 835 octa-core processor in the model sold in US – the best that was available at the time. It is clocked at 2.35 GHz and uses an Adreno 540 GPU. The Galaxy Note 8 packs 6GB of DDR4 RAM that contributes to a smooth user experience and fast multitasking. It has a base of 64GB of storage expandable via a microSD card. Samsung powers the Note 8 with a non-removable 3,300 mAh battery that should easily make it through the entire day. Heavy users that need to charge the Note 8 can do so very quickly with its Adaptive Fast Charging plugged into the wall or its Quick Wireless Charging, designed for both Qi and PMA formats

Many critics speculated that the Galaxy S8 would have a dual camera, but Samsung saved that distinction for the Galaxy Note 8. It uses two 12-megapixel cameras with the main camera offering 2x Optical Zoom, a large f/1.7 aperture for lowlight shots, PDAF, an LED flash, Auto HDR, and OIS. The secondary camera has a smaller f/2.4 aperture and can help with bokeh effects. Samsung included an excellent FFC with 8-megapixels, along with a large f/1.7 aperture, auto-HDR, and even includes its own autofocus. It should produce some excellent selfies and video chats.

The Galaxy Note 8 comes with the usual Samsung goodies and more – Samsung Pay, side panels for quick access to five of your most used contacts or ten of your most used apps. You get IP68 certification, a heart rate monitor, a SpO2 sensor, Bixby personal assistant, Samsung Connect that allows you to control Samsung appliances and other home electronics, as well as Samsung DeX that allows you to make your Note 8 into a desktop computer. Exclusive to the Note 8 is its S-Pen and its associated software that makes it even easier to access the Note 8’s capabilities. With drawing apps you can create a real work of art. If you are not into art, you can take a simple note, form a list of medications you take, or make a simple shopping list. The Note 8 is available in Midnight Black, Orchid Gray, Arctic Silver, Coral Blue, Maple Gold, and Rose Pink depending on what market you live in and what carrier you use. It originally came with Android 7.0 (Nougat) out-of-the-box, but has since been upgraded to Android 8.0 (Oreo) and the latest Samsung Experience 9.0 (UI). The device measures 159.5 x 73.4 x 8.1 mm and weighs in at 173 grams and will cost you about $950, although carrier deals can make it less expensive.

Very few changes were made to the LG smartphones in 2018, other than the naming nomenclature, by adding ‘ThinQ’ to each of their titles. By giving the LG G7 ThinQ’s display a 19.5:9 aspect ratio LG made it slightly taller and more narrow, giving the LG G7 ThinQ a more modern look. LG still uses the LCD display technology and kept the handy Always-On feature. LG did increase the megapixel count on its dual camera setup, but for some reason, LG decreased the wider angled lens on the secondary main camera. The LG G7 also includes a notch.

LG still insists on using an IPS LCD display rather than jumping to AMOLED, but at least they use the QHD+ resolution with 3120 x 1440 pixels and a density of 564 PPI. LG also increased the display size from 5.7-inches to 6.1-inches with a 19.5:9 aspect ratio. This taller and narrower display makes for better viewing when watching entertainment content like movies or games and also for multitasking. LG’s FullVision display uses Gorilla Glass 5 for protection. The Always-On floating display is used for notifications and to save battery life. The new display can go up to brightness up to 1,000 nits for better outdoor viewing – it can hold that brightness for 3 minutes before dropping back down in an effort to save battery life.

The LG G7 ThinQ uses the best 2018 processor available – the Qualcomm Snapdragon 845 for a fast and smooth experience along with an Adreno 630 GPU for unparalleled graphics. The SD845 is an Octa-Core processor clocked at 2.8 GHz, supported with 4GB of RAM and 64GB of expandable internal storage. LG also offers a model with 6GB RAM/128GB of expandable storage, depending on your location or where you buy the device. In an odd move, LG decreased the battery capacity from 3,300 mAh to a 3,000 mAh, but retained Quick Charge 3.0 and normal wireless charging.

The LG G7 ThinQ uses a dual camera setup of 16-megapixel sensors – the primary camera has a large f/1.6 aperture, Laser and PDAF, OIS, and LED flash. The secondary camera can be used for group pictures or a landscape shot because it does have a slightly wider angle, but has a smaller f/1.9 aperture. LG upgraded the small FFC of only 5-megapixel with a small f/2.2 aperture to a much larger 8-megapixel sensor with a larger f/1.9 aperture for selfies and video chatting.

LG added a notch to the display, but took away the on/off capability of the fingerprint sensor, and decreased the angle width in their secondary camera. LG did keep the 3.5 mm headphone jack, and designed what LG is calling a Boombox speaker that resonates sound throughout the smartphone’s chassis. LG bumped its Bluetooth to v5.0 and the built-in NFC will allow you to perform Android Pay mobile payments. Android 8.0 (Oreo) is included with the LG G7 ThinQ out-of-the-box. The LG G7 ThinQ measures 153.2 x 71.9 x 7.9 mm, weighs in at 162 grams and comes in Platinum Gray, Aurora Black, Moroccan Blue, Raspberry Rose and it will cost you about $750 for the 64GB model.

The Galaxy Note 8 and the LG G7 ThinQ are made for different audiences – the Note 8 is for the executive type that likes the convenience of taking quick notes during a meeting or a encounter with a colleague, while the LG G7 ThinQ is more for your everyday smartphone user. However, and in spite of the higher cost of the Galaxy Note 8 and its SD835 processor, because it has so many other features to offer, I am picking it as the winner of this comparison.

The Note 8 has the better Super AMOLED display, runs fast and smooth with its SD835, 6GB of RAM, and 64GB of base memory. It takes great photos with its dual cameras and sophisticated FFC. It has a larger battery and quick wireless charging for both Qi/PMA formats. It widens the mobile purchases by offering Samsung Pay, allows you to control IoT in your home via Samsung Connect and it has Samsung’s own personal assistant, Bixby. It adds security by including an iris scanner, hook up to a desktop computer with Samsung’s DeX module (purchased separately), monitor your heart rate and SpO2 with Samsung Health, and we still have to add all of the advantages of having and S-Pen.

The LG G7 ThinQ does use the newest SD845 processor, it has a great camera setup, and a Boombox speaker, but after those couple of items, I see no reason to purchase the G7 ThinQ for $750. It has a slightly smaller display that uses the IPS LCD technology, has less base RAM, and a smaller battery. It does have a MIL-STD-810G standard, Google Lens, and a separate Google Assistant button but for less than an increase of $200, the Galaxy Note 8 seems to offer so much more.