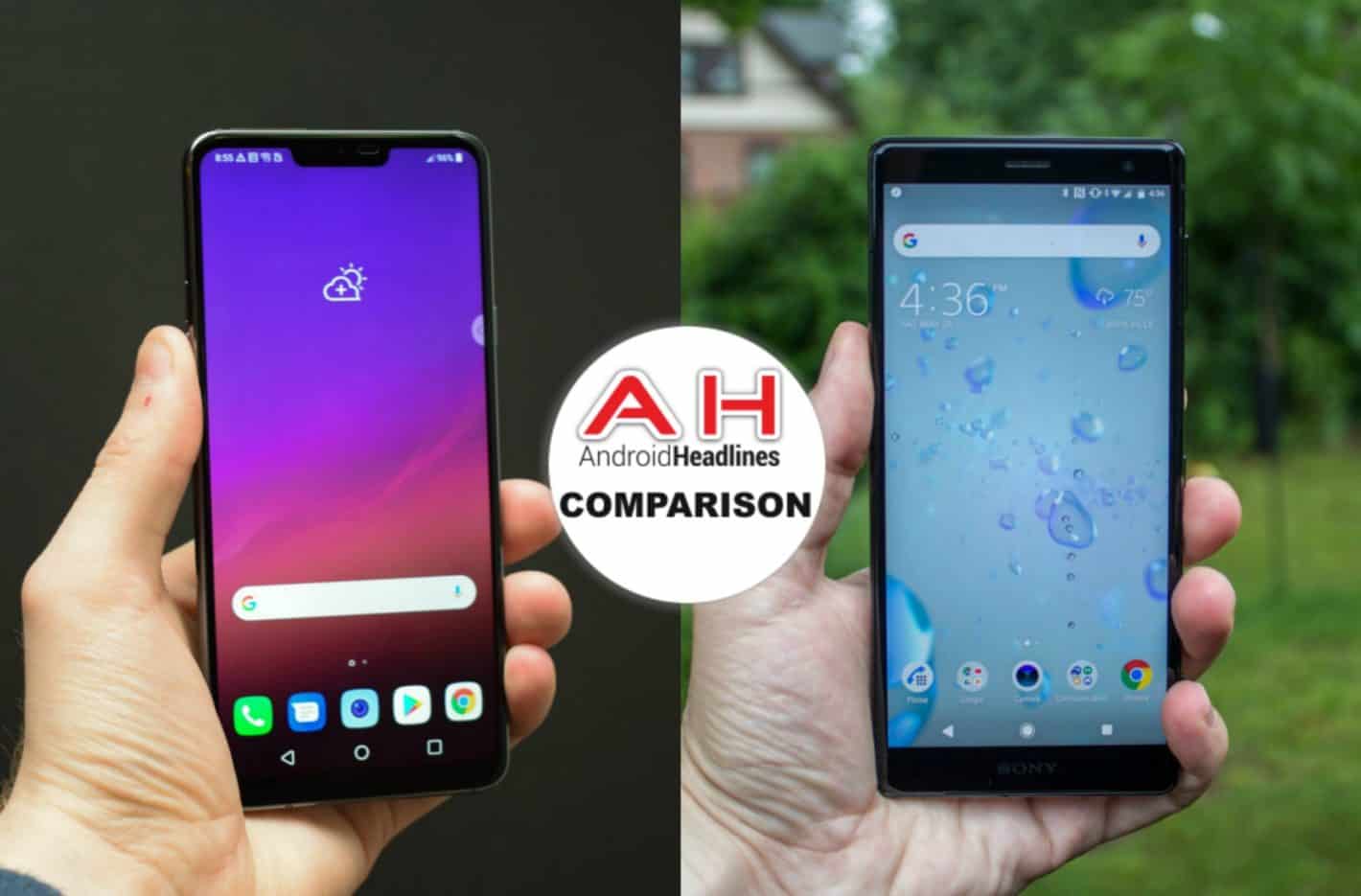 Do we have a good one for you today – the LG G7 ThinQ with its notch takes on the notch-less Sony Xperia XZ2. The LG flagship smartphones have looked amazing of late, while Sony phones often sport a more dated look along with larger bezels. The Xperia XZ2 is a total redesign, however, with small bezels, rounded edges, and the newer 18:9 aspect ratio – it really looks beautiful and up-to-date, although there are a few items — such as the headphone jack and large front-facing camera (FFC) — that have disappeared from the Xperia XZ2. How does the single camera on the XZ2 compare to the dual camera setup on the G7 ThinQ? Let’s take a look at what these two smartphones have in common by taking a look at the specification sheet before we go into more detail.

The LG G7 ThinQ and the Sony Xperia XZ2 do have a few things in common. We can start with the almost identical height and width, while the XZ2 is thicker and weighs 36 grams more. Both displays use the IPS LCD technology, but the G7 has a QHD+ resolution versus the FHD+ resolution of the XZ2. These displays use an 18:9/19.5:9 aspect ratio as well as Gorilla Glass 5 for protection. The processors/GPUs are identical, they both offer models with 4GB or 6GB of RAM, and a base of 64GB of expandable storage. The batteries are close in size, offer Quick Charge 3.0, and wireless charging. The usual suspects are there with Wi-Fi, NFC, Bluetooth v5.0, Google Pay, IP68 water and dust resistance, Hi-Res audio, a rear-mounted fingerprint sensor, and Android 8.0 (Oreo).

Please take a careful look at the detailed specifications comparison chart below so you can see just how these two high-end smartphones stack up against each other. After that, we will look at each mobile offering in more detail and point out some of its pros and cons. From all of this information, we will try to determine the winner based on overall specs, as well as the execution of design and functions.

Other than increasing the display size, increasing the camera sizes, and increasing the battery size, very few changes were made to the LG G7 ThinQ – not forgetting the addition of ‘ThinQ’ to the name. By giving the LG G7 ThinQ’s display a 19.5:9 aspect ratio, it makes it slightly taller and more narrow, resulting in a more modern look and a beautiful-looking smartphone. However, LG still uses the LCD display technology but this time around, the company added a notch. LG did keep the Always-On feature that saves battery life and is a real convenience for the user. While LG increased the megapixel count on its dual camera setup, but the decreased the wider angled lens on the secondary main camera.

While LG seems to have no intention of dumping its LCD setup, the G7 ThinQ does at least use a QHD+ resolution with 3120 x 1440 pixels and a density of 564 pixels-per-inch (PPI). The display size jumped from 5.7-inches to 6.1-inches with a 19.5:9 aspect ratio. This ratio makes for a taller and narrower display for an improved viewing experience for content like movies or games and also for multitasking. LG’s FullVision display uses Gorilla Glass 5 for protection. The Always-On floating display is used to glance at notifications and to save battery life. The new display can go up in brightness to 1,000 nits for better outdoor viewing – it can hold that brightness for 3 minutes before dropping back down in an effort to save battery life.

The LG G7 ThinQ is packing the Qualcomm Snapdragon 845 along with an Adreno 630 GPU for unparalleled graphics. The SD845 is an octa-core processor clocked at 2.8 GHz, supported with 4GB of RAM and 64GB of expandable internal storage. LG also offers a model with 6GB RAM/128GB of expandable storage, depending on your location or where you buy the device. Either device will offer you a fast and smooth experience. LG decreased the battery capacity from 3,300 mAh to a 3,000 mAh, but retained Quick Charge 3.0 and normal wireless charging.

With dual cameras being almost the standard nowadays, the LG G7 ThinQ packs a dual camera setup of 16-megapixel sensors – the primary camera has a large f/1.6 aperture, Laser and PDAF, OIS, and LED flash. The secondary camera can be used for group pictures or a landscape shot because it does have a slightly wider angle, but has a smaller f/1.9 aperture. LG increased the size of the main and secondary cameras from 13-megapixels – but we all know it is not how large they are, but the quality of sensors and software. The LG upgraded the small FFC of only 5-megapixel with a small f/2.2 aperture to a much larger 8-megapixel sensor with a larger f/1.9 aperture for selfies and video chatting.

LG added a notch to its display, and then took away the on/off capability of the fingerprint sensor. LG did keep its 3.5 mm headphone jack, but then deceased the angle width in their secondary camera. LG revamped the speaker – calling it a Boombox speaker that resonates sound through the smartphone’s chassis. LG bumped its Bluetooth to v5.0 and the built-in NFC will allow you to perform Google Pay mobile payments. Android 8.0 (Oreo) is included with the LG G7 ThinQ out-of-the-box. The LG G7 ThinQ measures 153.2 x 71.9 x 7.9 mm, weighs in at 162 grams and comes in Platinum Gray, Aurora Black, Moroccan Blue, Raspberry Rose and it will cost you about $750 for the 64GB model.

Sony did a great job in redesigning the Xperia XZ2. Gone are the large bezels, the fingerprint sensor is now on the back of the device, the aspect ratio is now 18:9, giving it a modern look, and the rounded edges add an extra touch of class. Sony added Gorilla Glass 5 on both the front and the back, which also allowed for the addition of wireless charging. The fingerprint sensor is now activated for US models and can be used to make mobile purchases. Sony has used the newest Snapdragon chipset and the Adreno 630 GPU, and still offers Hi-Res audio and stereo speakers, but no 3.5 mm headphone jack, and the FFC shrunk from 13-megapixels to only 5-megapixels.

The Xperia XZ2 does not have a notch but does feature a 5.7-inch IPS LCD FHD+ display. This resolution gives us 2160 x 1080 pixels that translate into 424 PPI. Sony upgraded to the latest 18:9 aspect ratio that gives the smartphone a more modern look and also offers a better proportion for entertainment apps and when multitasking. Sony protects its display with Gorilla Glass 5. A non-removable 3,180 mAh capacity battery powers the Xperia XZ2 with support for Quick Charge 3.0 and wireless charging.

The newest Qualcomm Snapdragon 845 is used in the Sony Xperia XZ2, as it is in most 2018 flagships. The SD845 is an octa-core processor clocked at 2.7 GHz and it is paired with the Adreno 630 GPU that will handle any intense gaming graphics or action videos you can throw at it. The standard Xperia XZ2 comes with 4GB of RAM, although there is a 6GB model offered as well – both come with 64GB of expandable internal storage.

Sony manufacturers almost all of the camera lens/sensors used on other smartphones, so naturally there is a good lens in its own smartphone…not the best, but a good one. Many manufacturers are switching to multiple cameras, but Sony has chosen to use a single 19-megapixel sensor for their main camera with an aperture of only f/2.0. It comes with its own gyro EIS for stability, uses both laser and PDAF for focusing and comes with an LED flash. Sony downsized the large 13-megapixel FFC sensor found on the Xperia XZ to a small 5-megapixel sensor with a small f/2.2 aperture, but it does come with a gyro EIS for stability for selfies and video chats.

Visually, the Xperia XZ2 looks like a million bucks on the outside and has upgraded electronics on the inside, yet it still represents some backward steps. Sony took away the 3.5 mm headphone jack on the Xperia XZ2, yet it is 11.1 mm at its thickest point. There is no support for VoLTE or Wi-Fi Calling, which is necessary on a new flagship. Sony took its large 13-megapixel FFC and inserted a very small 5-megapixel along with a small f/2.2 aperture. Sony did include an excellent vibration motor, a PS4 ecosystem (if you use a PS4), stereo speakers, and superb battery life. The fingerprint sensor is now activated for the US market. The Xperia XZ2 uses a very light user interface on top of Android 8.0 (Oreo), making it run fast and smooth. The device measures 153 x 72 x 11.1 mm and weighs in at a hefty 198 grams. It comes in Liquid Black, Liquid Silver, Deep Green, or Ash Pink. It will cost you about $670 for the 4GB/64GB version and $699 for the 6GB/64GB version.

While the LG G7 ThinQ does cost a little more, I am picking it as the winner of this comparison. It has a larger display, albeit with a notch, that uses the QHD+ resolution, and offers Dolby Vision, and the Always-On display. The dual camera and FFC offer more options and great photos. It may lack stereo speakers, but it does offer its Boombox speaker technology and a 3.5 mm headphone jack. Add to that facial/voice recognition, Google Lens, a separate Google Assistant button, and a MIL-STD-810G rating.

The Sony Xperia XZ2 is a major upgrade in looks for the company, but it has nothing to offer that the LG G7 ThinQ does not. When you take into account the extras that the LG G7 has, even adding the slightly higher price tag, it still comes out on top.