According to a new report, HMD Global’s Nokia-branded smartphones could start receiving Android P as soon as August. The company already confirmed that its smartphones will get Android P when it gets released, and this new report that just surfaced can be considered semi-official, in a way. This info is based on an e-mail which was shared with the Nokia Power User (NPU) by one of its readers, and in that e-mail, Nokia Mobile Care says that Nokia-branded phones are expected to get Android P sometime in August.

This is not exactly a confirmation from the company itself, but their helpdesk, so there has to be some truth in it. Of course, not all Nokia-branded Android phones will get the update straight away, but some of them may get it as early as August, like the Nokia 7 Plus, for example. Why the Nokia 7 Plus? Well, that is the only Nokia-branded smartphone that is currently enrolled in Google’s Android Developer Preview program at the moment, even though it’s not the only Nokia-branded phone that runs stock Android as part of Android One initiative. In any case, Google is expected to release Android P to OEMs in the third quarter this year, so August kind of fits into the equation, and the Nokia 7 Plus will definitely be one of the first OEMs to get the update, mainly due to its enrollment in the Android Developer Preview program, and the fact that stock Android runs on it, and chances are that other newer Nokia-branded phones will be fast to get the update as well.

Google had released several Android P developer previews thus far, though we still do not know what will the company actually call that update, in other words, what the P stands for. Google had already revealed a number of features of Android P, however, including that rather interesting and significant redesign of the OS. Android P will step away from Android Oreo a bit, as Google is adopting a circular theme, and will change things around a bit. It seems like new gesture navigation system will be a part of Android P as well, as it can be activated in the latest Android P developer preview, and that navigation system is different than pretty much everything else on the market. 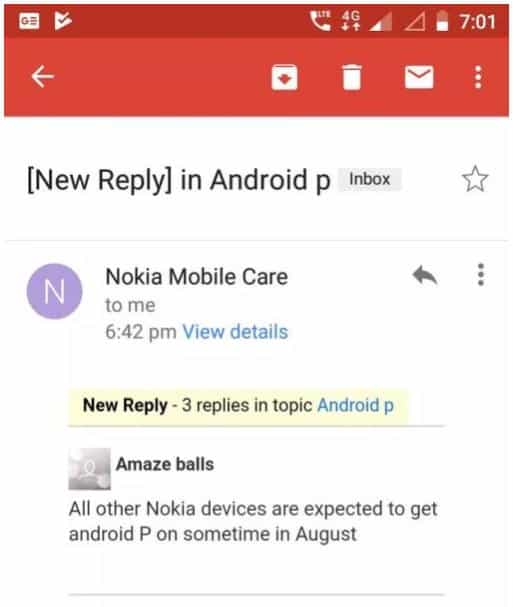