A new benchmark listing shows that Samsung is likely working on a new handset model that will be a part of the tech firm’s Galaxy A (2018) smartphone lineup. According to the listing on the website of the benchmarking application Geekbench, the Exynos 7885 chipset will power the upcoming device, which can be identified with the model number SM-A750FN. Aside from the rumored handset, this SoC already powers some of the tech firm’s more recent mid-range handset offerings, including the Samsung Galaxy A8 and the Galaxy A8 Plus. In addition, the Geekbench listing also shows that the device contains 4GB of RAM and that it runs Android 8.0 Oreo, although it is likely that the Samsung’s proprietary skin is installed on top of Google’s operating system.

Even though Samsung may still launch additional mid-range devices as part of its 2018 lineup, there are already rumors circulating about Samsung’s mid-range smartphone lineup for 2019. A recent report from the South Korean publication The Investor claims that the Galaxy A (2019) handsets will sport triple rear cameras, with one of the shooters equipped with a wide-angle lens. Furthermore, rumors claim that the handsets will feature in-display fingerprint sensors, although it is expected that Samsung will use less advanced technologies compared to the hardware that will be incorporated into the tech firm’s flagship Galaxy S10 devices. Nonetheless, these features, in addition to the use of cheaper components from Chinese suppliers, will allow the Galaxy A (2019) handsets to better compete with the handset offerings of Chinese smartphone manufacturers like Xiaomi, Huawei, OPPO, and Vivo. 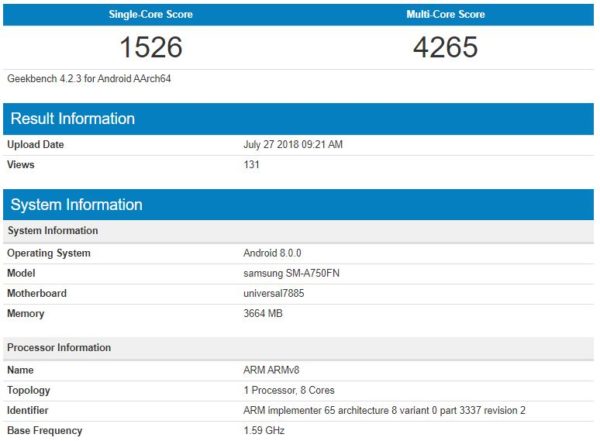