The latest Android distribution numbers released by Google show a substantial increase in the percentage of active devices that run Android Oreo over the last two months. The figures show that 12.1-percent of devices already run Android Oreo, which is a significant increase from the 5.7-percent share recorded by the search giant this May. More specifically, around 10.1-percent of Android devices currently run Android 8.0 Oreo, while two-percent have the newer 8.1 build. In contrast, Android 8.0 had a market share of 4.9-percent, while 0.8-percent of active devices ran Android 8.1 two months ago.

Meanwhile, Android Nougat still holds the largest market share among the different versions of Google's operating system, although its share saw a slight decrease in the last two months. Android Nougat is currently running on 30.8-percent of all active Android devices, down from 31.1-percent recorded two months ago. The latest figures further show that the percentage of devices that run Android 7.0 Nougat went down from 22.9-percent last May to 21.2-percent this month, although the slight boost in the market share of Android 7.1 Nougat offset this decrease. Other versions of the operating system also saw reductions in their share of the ecosystem over the past two months. For example, the proportion of devices running Android Marshmallow went down from 25.5-percent last May to 23.5-percent in July, while both Android Gingerbread and Ice Cream Sandwich saw a 0.1-percent decrease.

The substantial increase in the market share of Android Oreo can be attributed to the launch of new devices that already ship with the latest major and stable iteration of Google's operating system, as well as the distribution of software packages that upgraded the operating system version of various handsets. However, Android Nougat will likely remain the most widely used version of the mobile operating system until 2019. Meanwhile, Google is now offering the third beta version of Android P for select devices, with the new OS being expected to hit the stable channel in late summer. 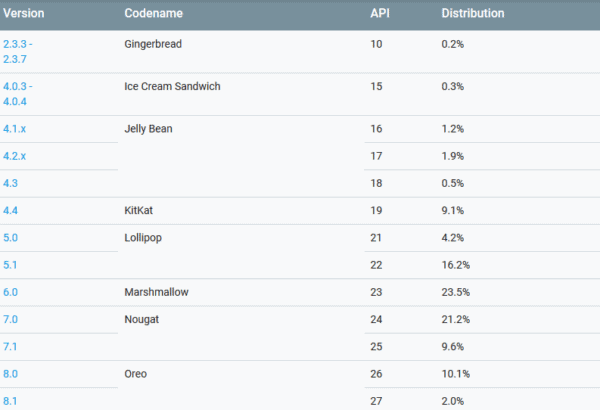