Huawei has just announced that the ‘GPU Turbo’ update will be coming to a number of its devices starting next month. A couple of days ago, Honor announced that the Honor 10 will be getting this update in the near future, while GPU Turbo was introduced along with the Honor Play handset a while back. In case you’re wondering, GPU Turbo is basically a feature which considerably boosts GPU performance, and also reduces power consumption. To be more exact, it improves device performance by 60 percent, while it reduces battery consumption by 30 percent, according to the company.

GPU Turbo is expected to impact gaming the most, as that is where a smartphone is in need of extra performance from the GPU, and that is the main reason Huawei is pushing out this update. GPU Turbo can accelerate performance by optimizing system utilization of software and hardware resources, says the company. Now, the company has released a whole list of devices which will be getting this update, while Huawei also noted when the update is expected to hit which device. So, it seems like the Huawei Mate 10, Mate 10 Pro, Mate RS, P20, and P20 Pro are the first in line to get the update, which is not surprising considering those are the company’s most powerful smartphones, and they’re all fueled by the company’s flagship SoC, the Kirin 970. All of those devices will start getting the GPU Turbo update starting in August, and the regions that will get it are: Europe, Russia, Asia Pacific, Middle East, and Africa.

The Huawei Mate 10 Lite, Nova 2i, P Smart, P20 Lite and Y9 2018 will start getting the update in September. All phones that are listed in the previous sentence will get this update in all markets, except the P20 Lite, for the P20 Lite, Huawei listed the following regions: Europe, Asia Pacific, Middle East, and Africa. And last, but not least, the Huawei Mate 9, Mate 9 Pro, P10, and P10 Plus will start getting the GPU Turbo update in November. 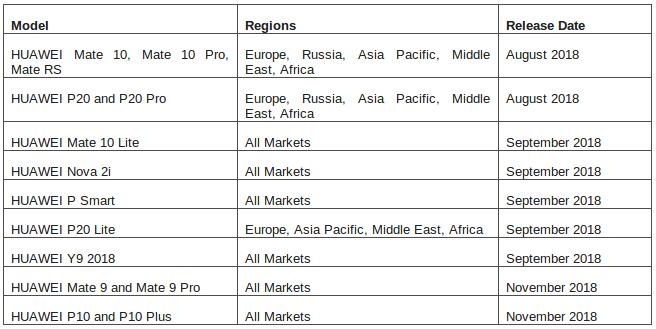