The Honor Note 10 is Honor’s upcoming flagship phablet, and the device’s specs have just surfaced. Before we start talking about its specs, however, it’s worth saying that renders of the phone surfaced recently, and judging by those, the device will sport really thin bezels, and will not include a display notch. The phone’s display will sport rounded corners, while two cameras will be included on its back. A fingerprint scanner will be placed on the back of the phone as well, while you will find Honor’s logo both on the back of the device, and below its display. The Honor Note 10 will be made out of metal it seems.

That being said, the device is said to sport a 6.9-inch QHD+ display, while it will be fueled by Huawei’s most powerful SoC to date, the Kirin 970. That processor is already fueling the company’s Honor 10 flagship smartphone, while it’s also fueling the Huawei P20 flagship smartphones. 24 and 16-megapixel cameras will be included on the back of this smartphone, if the leaked info is to be believed, while a single 16-megapixel camera will be included on its front side. Android 8.1 Oreo will come pre-installed on the device with Huawei’s Emotion UI (EMUI) 8.1 skin, while a large 6,000mAh battery will also be a part of this package, and it will support Huawei’s SuperCharge fast charging. A Type-C USB port will sit on the bottom of the device, while the phone will pack in 6GB of RAM and 128GB of storage. NFC will be a part of the package as well, but wireless charging will not, as this phone’s back will be made out of metal. 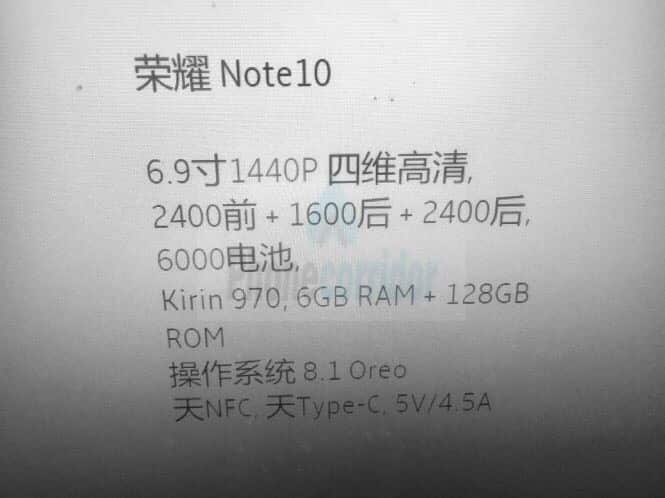