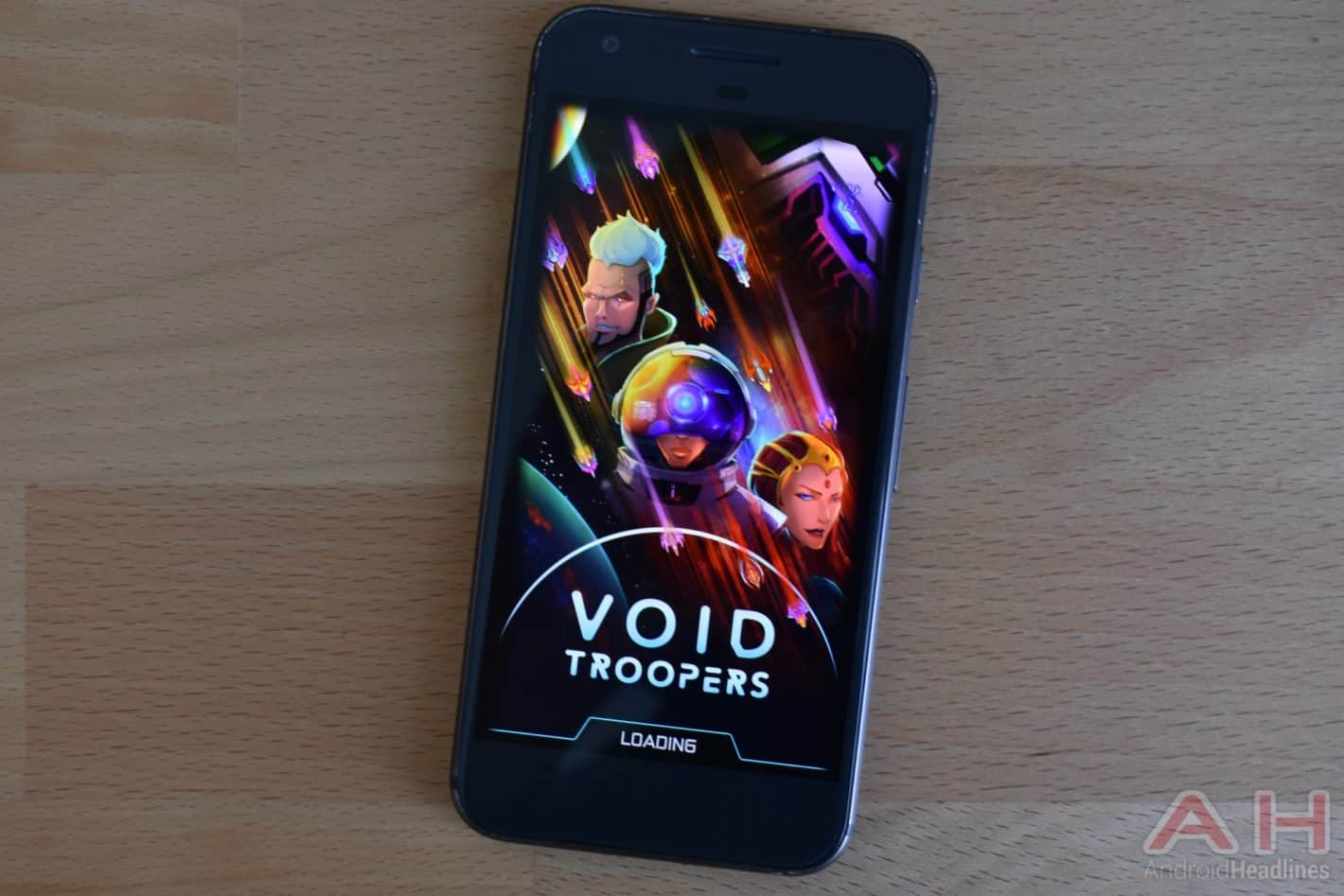 Mobile games have exploded over the last five years or so in terms of popularity, and in that time, there has been a pretty big expansion on the types of games you can find on the Play Store. One type of game which has expanded quite a bit are clicker or tapper games, which are a lot more casual in terms of gameplay and are great for being able to pick them up and play for just a few minutes or longer sessions if you prefer. One of the latest types of games in this genre is Void Troopers: Sci-Fi Tapper, and is published by the same team that released Light A Way, which we reviewed earlier this year. Void Troopers takes a vastly different approach in regards to the story, so let's dive in and see what it has to offer.

First things first, you'll need to head to the Play Store and download Void Troopers and install it onto your device, and from there you can begin enjoying the content.

Right off the bat Void Troopers is very reminiscent of a Galaga or Space Invaders type of game from a visual standpoint.

Orientation is set in portrait mode, with you looking down on the top of the ship and shooting at enemy ships coming from the top of the screen. This sort of retro-inspired visual style to the game should offer a little nostalgia to gamers who remember games like Galaga.

As depicted in one of the screenshots above the game has you tap the screen to initiate your attacks for incoming enemies and such, and while you can tap with just one hand and the game can be played this way, it's suggested that you hold the phone with both hands and tap with each thumb, rotating back and forth. This actually works quite a bit better after having tried both methods, and your attacks and taps are much faster so naturally you do more damage.

While most rounds will be filled with regular enemies of varying difficulty, the end of each phase will host a boss fight with a much more powerful enemy that does more damage and has more health points. Bosses are also much bigger in terms of size as you can see the difference between the ship from the boss and the ships from the standard enemies. While bosses do inflict more damage, you seems to always have a constant shield up which protects your own ship. You still take damage as the attacks hit your shield, though.

Though this is a tapper game and it is more casual in terms of gameplay, there is still a story to follow to give it some more depth which helps keep you engaged and prevent the game from feeling too monotonous. If you're a fan of sci-fi as well, then the story should capture your attention. The story is based on an alien invasion and as a Void Trooper you're an elite pilot trained to handle these sorts of threats, so it's your job to go out and stop the invasion.

There are more than a few different galaxies to explore in this game, and each one has a certain number of phases with plenty of battles in them. In the top right corner of the screen during gameplay, there's a map button which you can press that will take you to the screen you see in the above image, and this will show which galaxy you're currently on as well as let you scroll through to see the other galaxies. This is how you can also jump around to the galaxy you want to explore, though you can only explore the ones which you have already unlocked.

This is a free game but there are in-app purchases, so of course there is a shop where you can buy extra items that can help you in the game. This is also where you can go to claim your free gifts which unlock at certain periods in the game. Your first one will unlock once you reach Galaxy 2, and these gifts can be useful items so you definitely want to make use of the store even if only for this purpose whenever there is a free gift available.

During the game you'll notice a series of tabs down at the bottom of the screen, and here you'll be able to cycle through the different options to enhance gameplay. For example there is a tab which lists all your abilities and tapping on them will allow you to upgrade them, though just like in Light A Way you will need to have the right amount of currency to pay for the upgrade. You earn currency just by playing and advancing so the more you play the more you'll be able to upgrade. There's also a tab for expeditions, as well as a tab for technologies that you can research. All of these things are important to help give you new attacks or make you stronger or increase your defense, so visit these often. These tabs are also where you'll find the store.

Lastly, there's also the menu which is where you'll find the achievements you've already obtained, and you can also check your stats here as well as configure the settings if there's anything with the gameplay you want to change. There are a few other options in here too like the button for finding other games from the same publisher, and an option to follow them on social media for free gems. Gems are the premium currency, so if you don't mind adding a few more follows to your social media footprint you can pick some up which might be useful down the line for getting an item or upgrade which you can't buy using the normal free currency you get.

Overall, Void Troopers is a tapper game and there are going to be some players that won't find this type of game amusing. That said, thanks to the story and the decent graphics, and the lighthearted setup, it can actually be pretty fun if you look at in the sense that this isn't a game which you'll likely spend hours playing at a time. These types of games are at their best when you play for a little bit at a time, and eventually you'll get to a point where the game will feel like it's going a little slower because enemies will be fairly tough with lots of health points, so defeating them will take longer.

If you're looking for a more casual game, then give this a try. It's a fun little tapper that has a nice theme to it and isn't hard to learn or master, meaning just about anyone can pick it up with relative ease. Plus, since it's a casual game it doesn't have to take up loads of your time, which makes this a perfect game for anyone who normally only has a little bit of time to play.