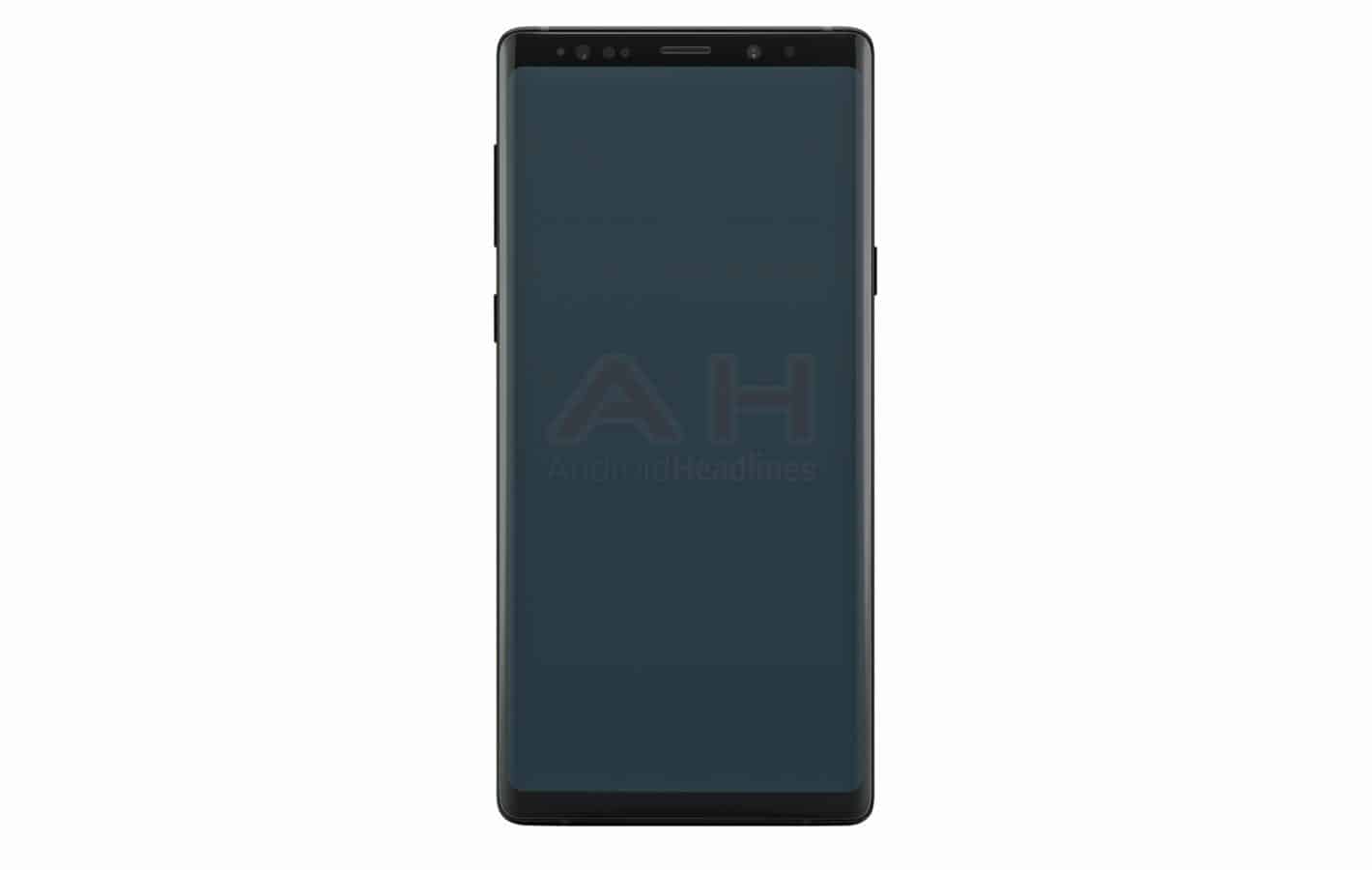 Samsung’s Galaxy Note 9 has leaked a number of times over the last few weeks, with images surfacing that either show off a grainy view of the new smartphone, a view hidden behind a case, or a depiction of the phone that’s primarily based on known information and not claimed to be authentic. One of the best and clear interpretations of the Galaxy Note 9, however, came through when the phone’s front panel leaked in June. Now, AndroidHeadlines can confirm that front panel view is pretty much exactly how the phone will look – thanks to the image above which confirms the front design of the Galaxy Note 9.

The image was provided to AndroidHeadlines by a reliable source and is understood to be an official render of the Galaxy Note 9. Unfortunately, it’s a little on the basic side and so the image does not provide any valuable information on the software, nor any details relating to the rear of the device. In spite of this, as far as AndroidHeadlines is concerned, this image should act as solid confirmation of what the phone will look like. The image confirms past speculation that there is going to be very little visual change in general, with the Galaxy Note 9 sporting an almost identical look to the Galaxy Note 8. This includes the same edge-to-edge design of the “Infinity Display,” as well as limited bezels on the top and bottom of the device. Like the Galaxy Note 8, the Galaxy Note 9 will not feature anything of note on the bottom of the phone – with the only noticeable hardware elements positioned on the top bezel.

Here, you will also find very little change compared to the Galaxy Note 8 as the Galaxy Note 9 boasts a near-identical hardware lineup, with the front-facing camera, iris scanner, earpiece, proximity sensors, and LED flash all literally in the exact same positions. It is, in effect, a carbon copy of the Galaxy Note 8 with no obvious differences. Which seems to be the case for the front design in general. While an argument could be made that the bottom bezel might be a little smaller than on the previous device, or that the corners are slightly more curved compared to the Galaxy Note 8, these are not guaranteed changes and highly interpretative based on first impressions. The power key is in an identical position on the right of the device, with the Bixby button is on the left, just below the volume buttons. Literally no changes. What may — or may not — be of interest, is the pocket for the stylus is a little less obvious in this latest image. While it was not massively obviously in the first press renders of the Galaxy Note 8 either, a slight deviation in the bottom right corner was visible if you looked close enough. Whether or not that means a more tight-fitting and seamless stylus will be included with the Galaxy Note 9 remains to be seen – but it’s a possibility.

Of course, the back of the device is a different matter altogether, and this is something on which AndroidHeadlines is unable to offer any more information at this stage due to only the front render having being provided so far. For example, one of the most anticipated design changes for the Galaxy Note 9 is the positioning of the fingerprint sensor. This was a highly contentious issue on the Galaxy Note 8 due to the fingerprint sensor located on the right of the dual rear cameras. A position many thought to be uncomfortable for use. The latest speculation on this is the fingerprint sensor is now going to be moved to a more central position, beneath the dual rear — yes, two are once again expected — cameras. As for the more general specs, this is another area that is unlikely to see much change beyond the obvious and organic improvements. For example, while the display on the Galaxy Note 8 measured in at 6.3-inches, rumors point to a 6.4-inch display on the Galaxy Note 9 – this may actually be further proof that the bottom bezel in the image above is slightly less-bezel than on the Galaxy Note 8. In either case, the same 2960 by 1440 resolution and 18.5:9 aspect ratio is expected to be in effect. Inside, the Galaxy Note 9 is expected to come powered by a core combination of 6GB RAM, a minimum of 64GB storage, and a Qualcomm Snapdragon 845 SoC. Although this combination may differ depending on region as the international versions are expected to feature the Exynos 9810 chip from Samsung itself. Cameras are also expected to change minimally on paper, with dual 12-megapixel cameras on the back and an 8-megapixel sensor on the front. Otherwise, the battery is expected to have been boosted up to a capacity of 4,000 mAh and the OS up to Android 8.x (Oreo). Lastly, the Galaxy Note 9 is expected to become available in at least five colors options: Midnight Black, Coral Blue, Orchid Gray, Teddy Brown, and Titanium Gray. With the version shown off in this new image being the Midnight Black color. While availability still remains an unknown, Samsung has announced an event for August 9 which is largely where and when the Galaxy Note 9 is expected to make its debut. For more information on the Galaxy Note 9, click here.