Skip to content
Advertisement
Trusted By Millions
Independent, Expert Android News You Can Trust, Since 2010
Publishing More Android Than Anyone Else
6
Today
6
This Week
219
This Month
4279
This Year
114309
All Time
Advertisement

Pokemon GO players who have been waiting to see the complete Johto and Hoenn Pokedexes, including legendaries, will be happy to hear that a data miner recently found and compiled data for a number of new Pokemon. The data miner revealed their findings on a Twitch stream under the username Chrales. The data revealed that Smeargle, Clamperl, and Huntail are intact, along with Nincada and its evolutions. New legendary Pokemon include Celebi, Jirachi and Deoxys, with all four of its forms intact. This revelation comes with only a short time left before the second Pokemon GO Fest event, so it stands to reason that some or all of these will be revealed either at the event or in relation to in-game events announced at the festival.

For those not entirely versed in Pokemon lore, there are a few gameplay-related reasons that some of these Pokemon could have been holdouts for so long. Nincada, for instance, sheds its shell when it evolves to Ninjask. If you have extra space in your party and a spare Pokeball, that shell comes to life and becomes Shedinja, a unique ghost and bug Pokemon with only 1 HP. Obviously, this may be hard to mimic in Pokemon GO, since there’s no set party system like the mainline games have. Deoxys, meanwhile, has four different forms with different stats. Smeargle, meanwhile, has a signature move that copies the last move that was used on it, and thus would be difficult to implement with Pokemon GO’s battle system. Unfortunately, how exactly those obstacles will be overcome in the mobile game are not addressed in the found data.

The addition of Celebi and Jirachi is particularly interesting in that the groups of tripartite legendaries up until the fourth generation have been released, including the legendary birds, legendary dogs, the weather trio, and the Regi-variants. Latios and Latias have also come and gone. Mew is linked to a special event involving field research, and Mewtwo was available briefly as an exclusive raid battle. This means that the release of Celebi and Jirachi leaves no more legendary and mythical Pokemon in the first three generations. This could mean that the fourth generation Pokemon from Diamond, Pearl and Platinum may be coming soon, or another legendary that’s already in the game, such as Mewtwo, could have its day in the spotlight. 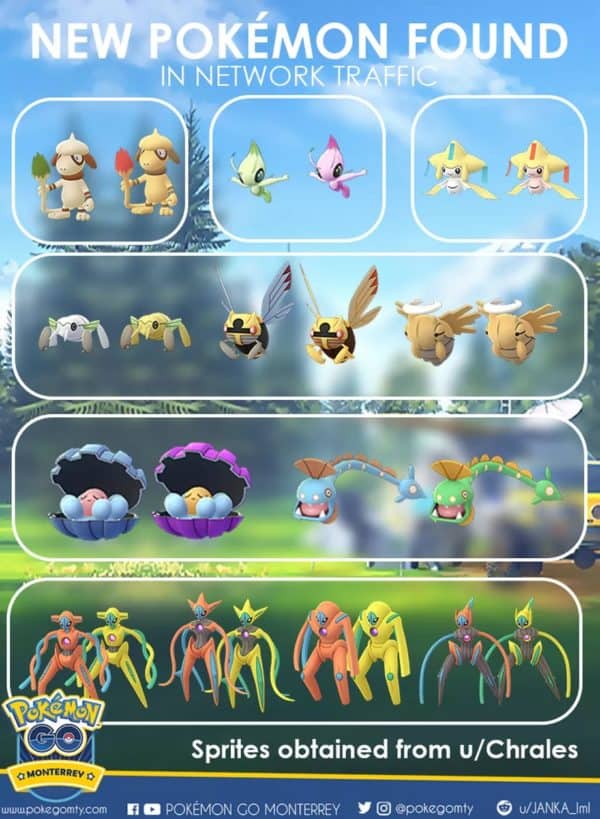