The Xiaomi Mi MIX 3 is the company’s upcoming flagship which had surfaced a couple of times thus far, and now a real-life image of the device has surfaced as part of a new leak. The alleged Xiaomi Mi MIX 3 surfaced in several renders a couple of days ago, and this new leak actually shows a device that is quite similar to the one shown in renders. If you take a look at the provided image, you will be able to see a device which has almost zero bezel around the display.

Having said that, this phone resembles the XIaomi Mi MIX 2S quite a bit, but it does not have the bottom chin like the Mi MIX 2S. The Xiaomi Mi MIX 2S had the bottom chin mainly to host the device’s front-facing camera, and even though it had several other purposes, it seems like Xiaomi found a way to remove it completely, at least if the provided leak is accurate. The company will allegedly move the front-facing camera in the Mi MIX 3, and that camera will be placed in the upper portion of the device, but hidden away until you end up needing to use it. In other words, the Mi MIX 3 will allegedly sport a slide-out camera, a motorized unit, just like the Vivo NEX. As soon as you fire up the camera, and switch to the front-facing shooter, a front-facing camera will slide out from the top of the device, and it will be ready for use.

In addition to the front-facing slide-out camera, the Mi MIX 3 is expected to sport regular rear-facing cameras (two of them), and either a rear-facing fingerprint scanner, or an in-display one. The device will be fueled by the Snapdragon 845 64-bit octa-core processor, and it will include at least 6GB of RAM, though chances are that Xiaomi is planning to launch several models of the device. The phone will probably be made out of metal and ceramic, just like its predecessor, while Android 8.1 Oreo will come pre-installed on the device with either MIUI 9 or MIUI 10 included on top of it. The Xiaomi Mi MIX 3 is expected to arrive in either third or fourth quarter of the year, as the Mi MIX 2 landed back in September last year. 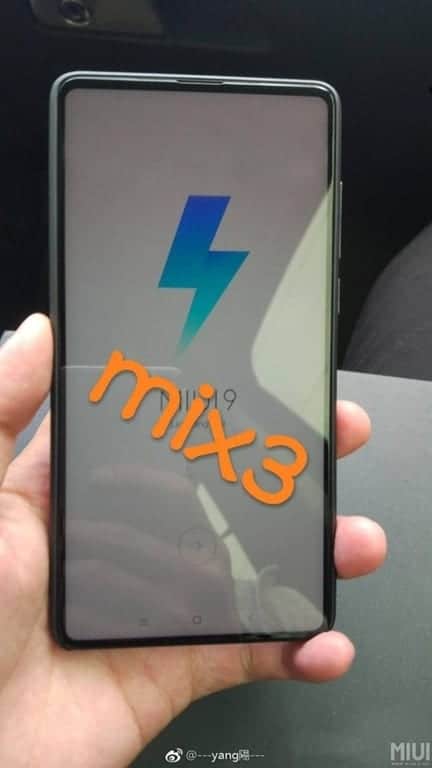