Google-owned Waymo has operated its public pilot in Phoenix, Arizona, dubbed the Early Rider Program, for just over a year. In that time, the service has picked up about 400 regular riders in the area, and it’s brought the total real-world miles driven by Waymo’s entire fleet to about 24,000 per day. Most of these riders are very young, very elderly, disabled, or otherwise unable to drive on their own. In order to get a better understanding of what people think of self-driving cars and how the technology could fit into everyday life once it goes mainstream, Waymo gathered data from its Early Rider Program participants and put out the graph seen below and an accompanying report that breaks down the data.

According to Waymo’s data, there have been over 20,000 applicants for a ride in the program in total, up from about 6,000 on the first day. Most of the Early Rider Program’s accepted riders used the service as transportation to work. Restaurants were the next most popular destination, followed by schools. Bars and spas were also common, and many used the service to get to the shop where their disabled car was waiting for them, which often meant exiting the program after the car was fixed up. Using the service to get to the supermarket and do your shopping was surprisingly low on the list of most popular destinations, with only electronics stores and gyms falling behind it within the confines of the top ten destinations. Waymo’s data indicates that applicants cited two main reasons, on the whole, for applying; they wanted to see the new technology firsthand, and they wanted to help foster a safer future on the roads.

The Early Rider Program has made it quite clear that people have a diverse range of reasons for trusting and desiring the advancement of self-driving car technology. One rider witnessed a fatal car accident and didn’t want to drive anymore, while another rider wants to take in her local neighborhood without focusing on driving, to name just a couple of cases that Waymo outed. Thanks to the data found in the program thus far, Waymo is working on a few key goals to make the service easier to use, including making it easier for riders to contact Waymo, and getting cars as close as possible to the places where riders want to be picked up, helping them avoid a long walk to a pickup spot. 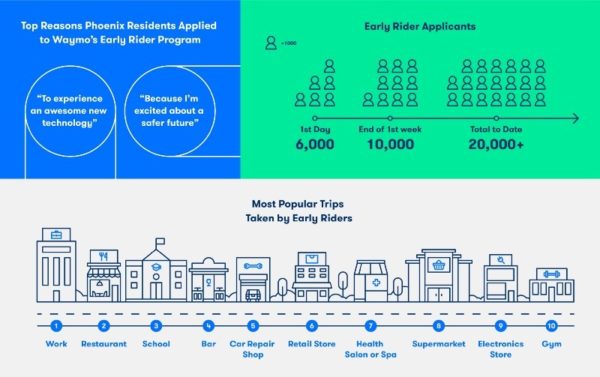