The third generation of the Sony Xperia XZ lineup is reportedly boasting a dual camera setup on the back, according to a new leak which revealed an entire spec sheet of what is believed to be the Xperia XZ3 series. The leaked image seen below indicates that the Xperia XZ3 will take a page from the Xperia XZ2 Premium’s handbook in terms of imaging capabilities, adopting a twin camera system. Additionally, the supposed Xperia XZ3 will be powered by the Qualcomm Snapdragon 845 chipset, the same processor that fuels the Xperia XZ2 Premium which was announced last April.

On top of the processor and camera, other specs disclosed by the leak include a 5.7-inch Full HD+ display with a resolution of 2160 x 1080 pixels and an aspect ratio of 18:9, similar to its predecessor. Sony is also supposed to pair the Snapdragon 845 chipset with 6GB of RAM and either 64GB or 128GB of internal storage, which can be expanded with a microSD card. The handset is also expected to use a 3,240mAh battery which will support Quick Charge 3.0. On the optics side of things, the Xperia XZ3’s dual-camera system will feature a 19-megapixel sensor and a 12-megapixel unit, similar to the XZ2 Premium. On top of that, the upcoming device is also supposed to boast a 13-megapixel front shooter with an aperture of f/2.0, which sounds like the same front-facing camera found on the Xperia XZ2 Premium. The device will likely run Android 8.1 Oreo, as per the same source.

The phone will reportedly measure 153 x 72 x 10.1mm in size and weigh 183 grams, featuring an IP68-certified chassis which can also be found on other premium Xperia devices. The leaked document does not mention when the device will debut, but recent reports indicate the Xperia XZ3 will be launched at IFA 2018 trade show that is set to take place in Berlin, Germany, in late summer. 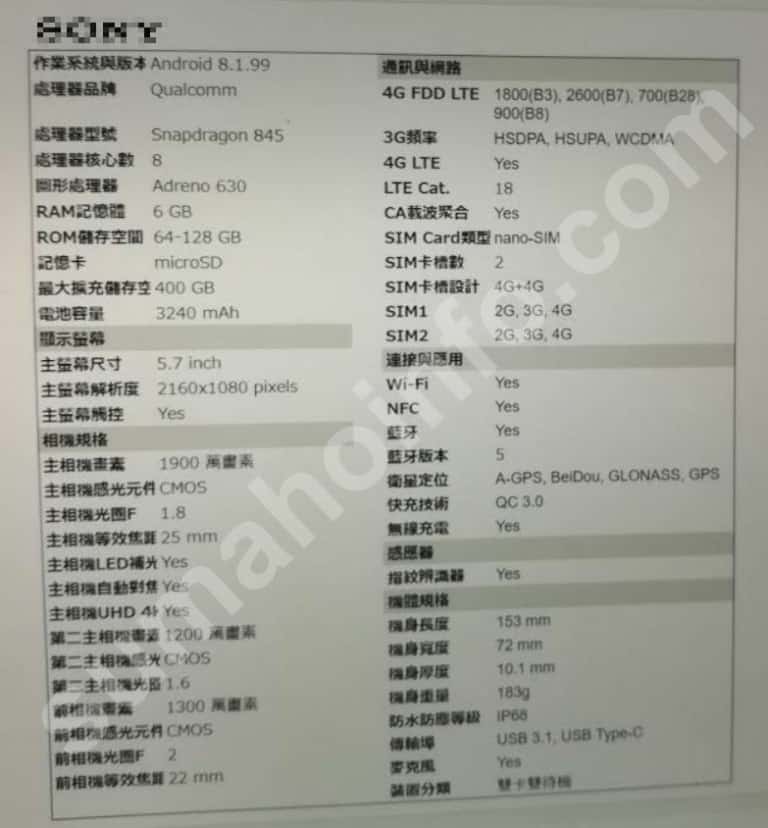