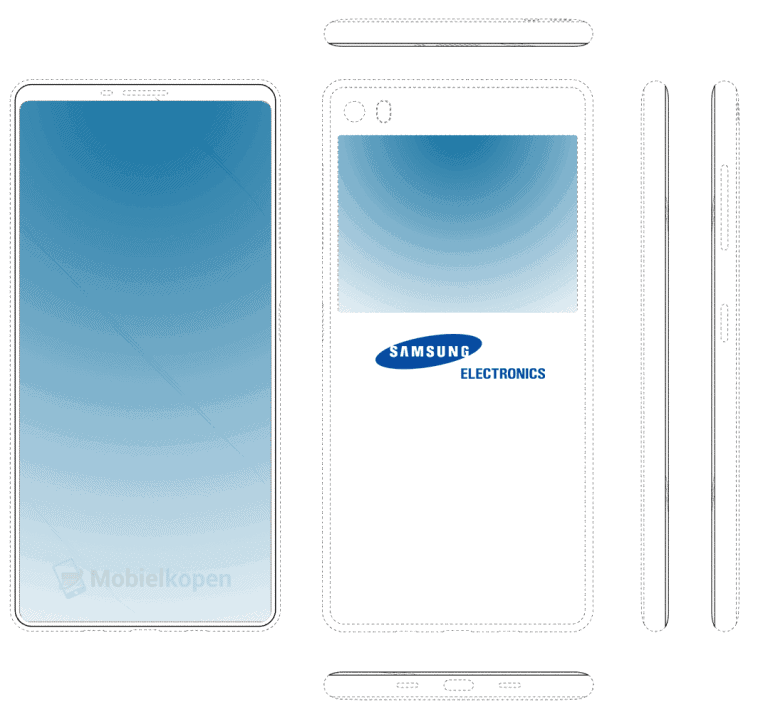 Samsung’s newest patent is rather interesting, and it may offer us a glimpse as to where Samsung wants to go when it comes to its smartphone design. You will find a number of sketches included in the gallery down below, and they are showing a smartphone with extremely thin bezels, and a secondary display on the back. As you can see, the bottom ‘chin’ is not present here, even though a really thin bezel is placed above the display, in order to house an earpiece and all the necessary sensors.

The most interesting part of this design is on the back, of course. A display which takes approximately one third of the phone’s back side is present here, and above it, you will notice the phone’s main camera. All the usual physical keys are included on the right-hand side of this phone, while a Type-C USB port sits on the bottom, along with a loudspeaker. It is worth noting that this is just a new design patent that Samsung came up with, and it may never become a reality, but we’ll see what the future holds, as far as we know, Samsung may implement something like this in the coming months, or next year, we’ll see. Samsung is well-known for experimenting when it comes to smartphone designs, so instead of implementing something like this in its existing flagship series (Galaxy S and Note series), the company may opt to release a whole new Galaxy lineup in order to test it out.

The Galaxy Note 9 is Samsung’s upcoming flagship, though that device will almost certainly look quite similar to the Galaxy S9, and expecting a secondary display on the back is a reach. The Galaxy S10 may incorporate pieces of this design, though Samsung will probably not include a secondary display on that phone either, even though you can expect to see a redesign in the Galaxy S10’s case, at least when you compare it to the Galaxy S8 and S9, as Samsung tends to change the design more drastically every two years. It is worth noting that the alleged Galaxy S10 prototype surfaced quite recently, though it remains to be seen if that leak is legit or not, as it seems to good to be true.

Advertisement
Advertisement
Trusted By Millions
Independent, Expert Android News You Can Trust, Since 2010
Publishing More Android Than Anyone Else
31
Today
115
This Week
370
This Month
5114
This Year
106589
All Time
Advertisement