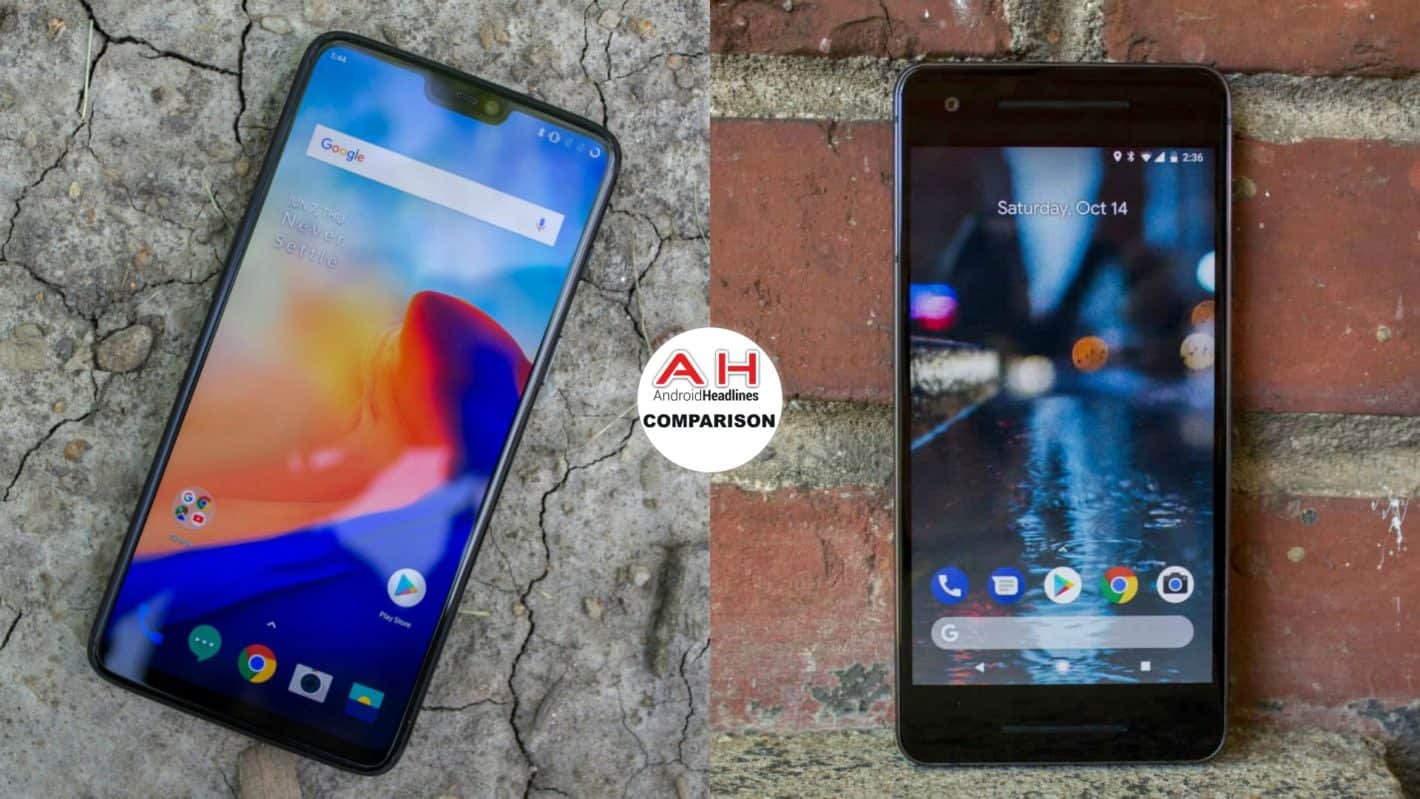 Do we have a good one for you today – the OnePlus 6 takes on the Google Pixel 2. The Pixel 2 is using the Snapdragon 835, with a smaller display and larger bezels. The Pixel 2 looks like an older device with its 16:9 aspect ratio and large bezels. It was the Pixel 2 XL that Google designed to look modern. We will first look at the things these two devices may have in common and then look at each individual smartphone in an attempt to select a winner.

The OnePlus 6 and the Google Pixel 2 share an AMOLED display technology and Gorilla Glass 5 for protection, but that is all – the size, resolution and aspect ratio are all different. Both use a Snapdragon processor and Adreno GPU, but different models, each comes with 64GB of base memory. Both have excellent cameras, but the OnePlus 6 uses a dual camera setup, whereas the Pixel 2 uses a single camera. Both use a non-removable battery with their own versions of fast charging. Physically, both devices are close to the same size, especially the width and thickness, although the OnePlus weighs in at 177 grams versus the 143 grams for the Pixel 2. They both sport WiFi, Bluetooth v5.0, NFC, a rear-mounted fingerprint sensor, and Android Pay. 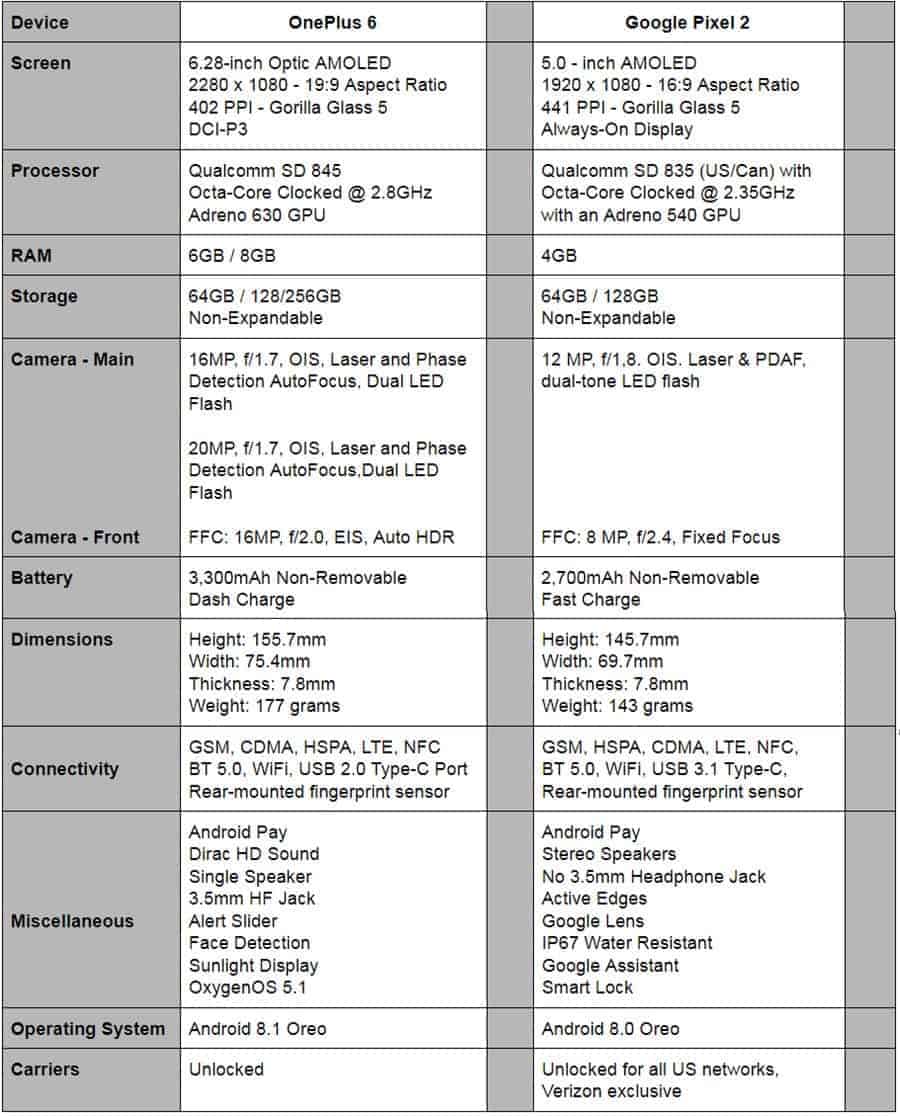 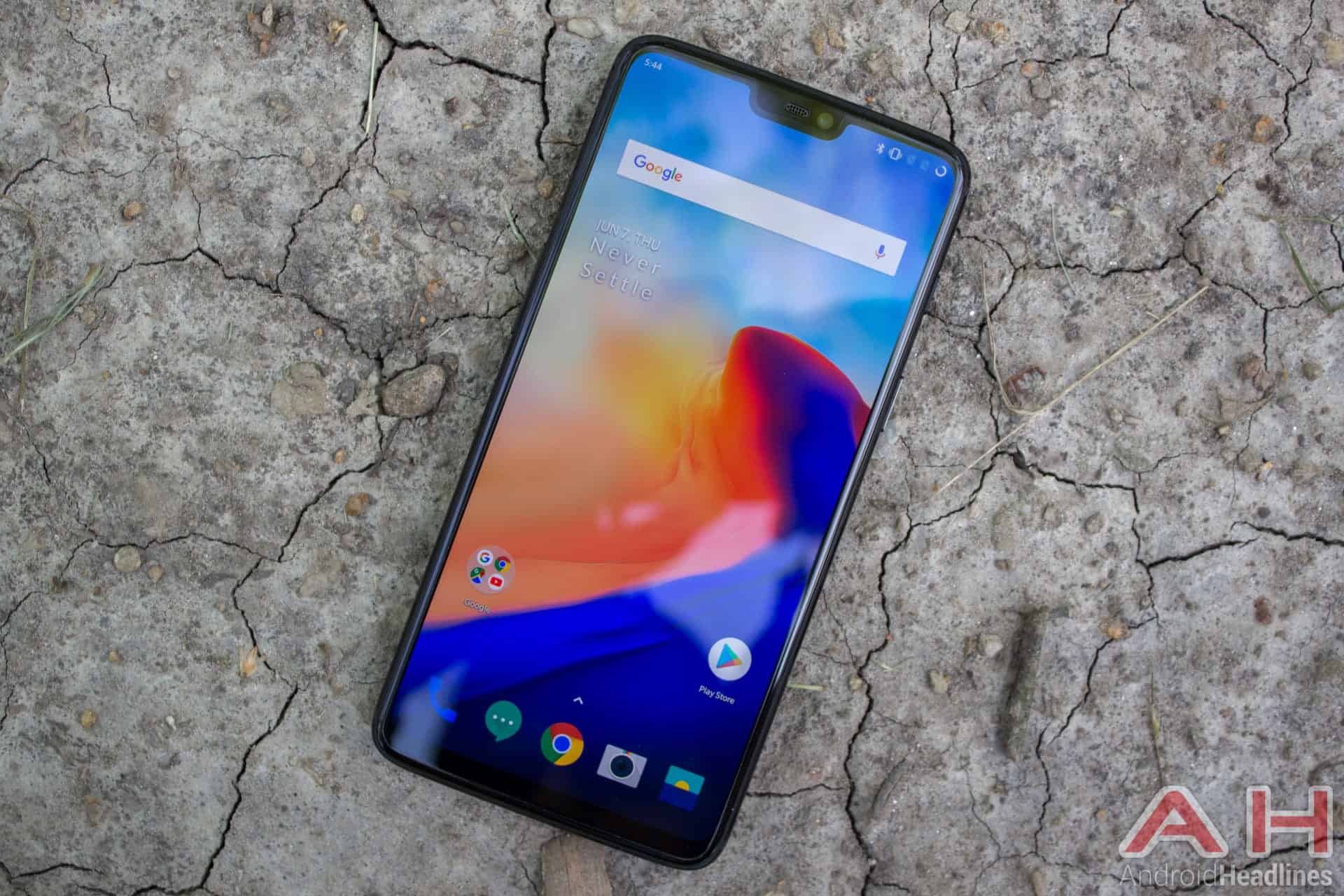 When you purchase a OnePlus smartphone, you can be sure of five things – one that you are getting a great bargain, secondly there will be a great camera, thirdly there will be lots of RAM, fourthly there will be no QHD resolution, and lastly, in six months, there will be a newer model with a ‘T’ attached to the number. The second version is often what the first version should have been, however; in this case, it looks like the OnePlus 6 is the real deal. It has small bezels, a very modern all-glass look, and is covered by Gorilla Glass 5, but it does have the notched display. The painted back offers more grip and less fingerprints, unless the heat and humidity are up. OnePlus listened to criticism and gave some additional functions to the Alert Slider, like zooming in and out when the camera is functioning.

The OnePlus 6 sports a 6.28-inch Optic AMOLED display, but they included the ‘Apple notch’  for some reason – does OnePlus want users that see their phone as an affordable iPhone? At the very least they use the AMOLED technology and Gorilla Glass 5 to protect the display. OP selected to use the latest 19:9 aspect ratio for a more modern look, as well as being better for enjoying entertainment and a better multitasking experience. OnePlus’ refusal to jump to the QHD and continuing to use a Full HD+ resolution is legendary. It offers up only 2280 x 1080 pixels that works out to 402 pixels-per-inch (PPI). Their Sunlight Display is present for better outdoor viewing. As with other Android smartphones that decided that a notch is necessary, you can falsely hide the notch by making it look like there is a small bezel across the top, but it is still ‘there’.

Unlike the Pixel 2, the OnePlus 6 is using the latest processor from Qualcomm, the Snapdragon 845 – the same one used in most flagship devices in 2018. The SD845 is an octa-core processor clocked at 2.48GHz. OP paired that processor with the Adreno 630 GPU to handle the most demanding graphics you can send its way. The base OnePlus 6 comes with 6GB of RAM and 64GB of non-expandable internal memory. OnePlus comes in two additional models with 8GB of RAM and either 128GB or 256GB of internal memory – each rendition is only a $50 increase from the previous model. A 3,300mAh-capacity battery powers the OnePlus and uses OnePlus’ Dash Charge, that claims to give you a 63-percent charge of your battery in only 30 minutes, but there is still no wireless charging.

We told you earlier that one thing you can count on with a OnePlus smartphone is a great camera and the OnePlus 6’s dual camera setup with better software and menus will not let you down. The main camera sports a 20-megapixel sensor with an large aperture of f/1.7, with EIS and OIS for stability. The 16-megapixel secondary camera comes with the same f/1.7 aperture and both cameras use PDAF with a dual LED flash. The front-facing camera (FFC) is a huge 16-megapixel and comes with its own EIS and Auto HDR – providing great selfies and video chats. OnePlus also redesigned a better interface with better menus, as well as allowing the user to use the Alert Slider to zoom in/out on subject matter when using the camera.

The OnePlus smartphones have slowly crept up in price as more features are offered, but still offers a great value compared to others on the market. It may not have a QHD display, but when we are looking through the human eye, is it really necessary? The lack of expandable memory continues to plague the OnePlus 6 and now OnePlus added the notched display to its list. OnePlus gives you 6GB or 8GB of RAM, it comes with an excellent dual camera setup and a 16-megapixel FFC. NFC allows one to use Android Pay for mobile purchases. The OnePlus 6 uses its own light user interface, OxygenOS, on top of Android 8.1 Oreo, making it easier/faster to receive Android updates. The device measures 155.7 x 75.4 x 7.8mm and weighs in at 177 grams. It comes in Midnight Black, Mirror Black, or Silk White. It will cost you $529 for the 6GB/64GB version, $579 for the 8GB/128GB version, and $629 for the 8GB/256GB version. 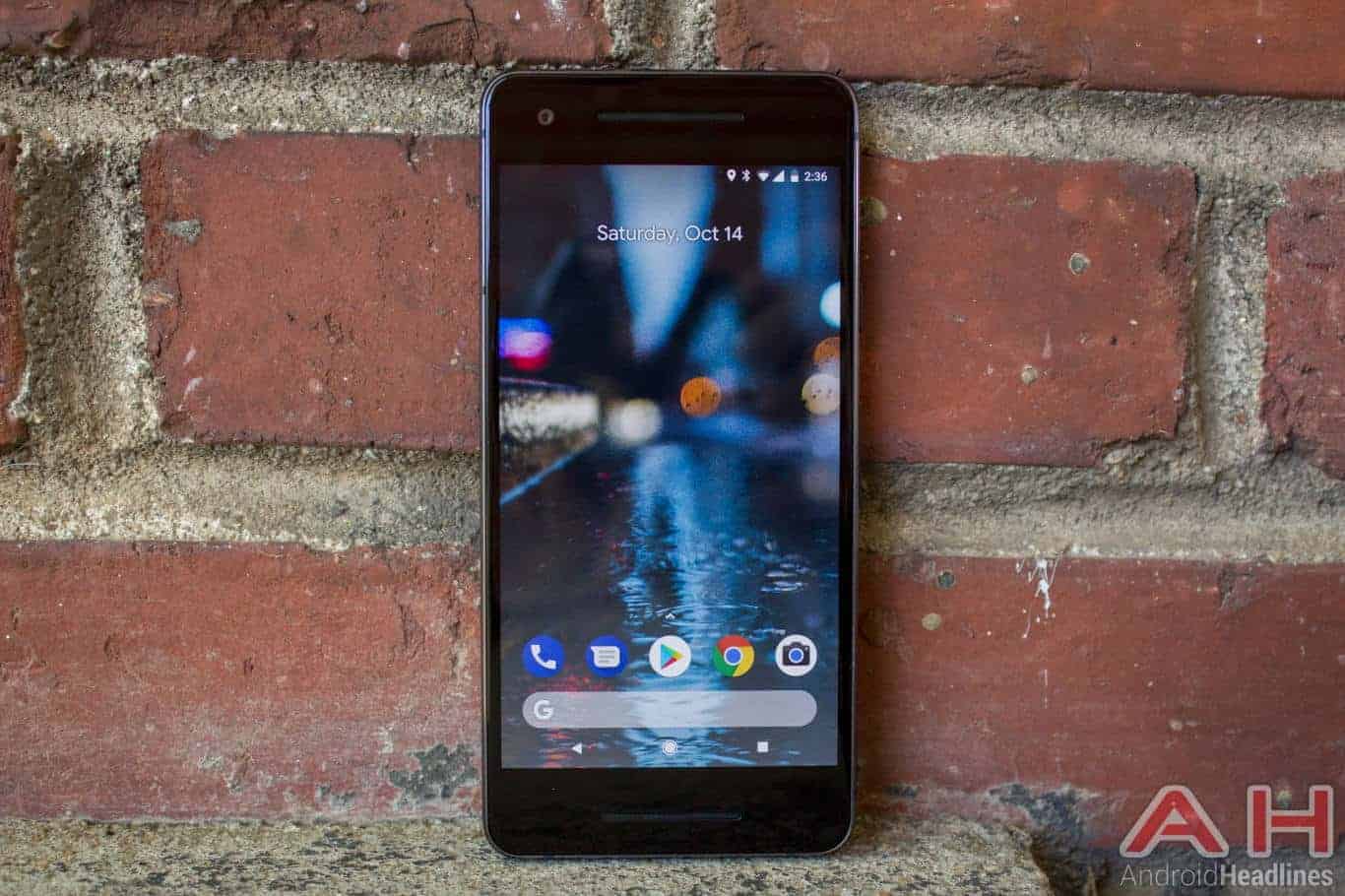 Google more than made a name change in 2016 when they switched from Nexus to Pixel. So in 2017, when the Google Pixel 2 came out, besides the name change Google included a kick-ass camera, an Apple/Samsung style division where the lower model has less features, and higher prices all around. With those higher standards and prices, Google’s phones are now elevated to real flagship status. While the Pixel 2 XL looks more like a modern flagship, the Pixel 2 looks a little dated with its large bezels and older 16:9 display ratio. Outwardly it may look somewhat dated, but inside the Pixel 2 uses the best processor/GPU available at the time, along with the AMOLED display technology. Users can ‘squeeze’ the Active Edge sides of the phone to launch Google Assistant and Google Lens can identify details from photos. However, with the smaller, FHD display, pricing is somewhat high with a standard 64GB model costing you $650. You can buy them unlocked to work on any major U.S. carrier, but Verizon is the exclusive dealer of the Pixel 2 phones.

The Google Pixel 2 sports a 5-inch AMOLED display, which is a good thing, but still comes with only Full HD resolution, giving you 1,960 by 1,080 pixels with a density of 441 PPI. Google only gave the Pixel 2 XL the newer aspect ratio and kept the old standard of 16:9 on the smaller Pixel 2. They did include the great Always-On display feature that keeps the user informed of their notifications without having to wake-up the device, and in return it helps save battery life. A small, non-removable, 2,700mAh capacity battery powers the device, and although small, it will make it through an entire day with no issues. When you do need to charge the device, fast charging support will make that process relatively swift.

Google made a wise choice and used the best Qualcomm Snapdragon  processor for both of their models available in late 2017 – the SD835  octa-core processor clocked at 2.35GHz and an Adreno 540 GPU for graphics. The Pixel 2 packs 4GB of RAM and 64GB of non-expandable storage, although you can also order a 128GB model. I say this was good at the time, but the newer models, like the OnePlus 6, are packing the newer SD845.Adreno 630.

Although the Google Nexus models never made a big deal about the quality of their cameras, with its Pixel lineup, Google has made taking great pictures a top priority – this was all done with a single lens. Both Pixel 2’s use a single camera with a 12-megapixel sensor with an aperture of f/1.8, contain both EIS and OIS for added stability, laser autofocus and PDAF, and a dual LED flash. Each time a Pixel model has been introduced, it has catapulted itself to the number one spot, which means it has slipped down since newer models have arrived. The FFC is an 8-megapixel unit with a fixed focus and a smaller f/2.4 aperture that is used for selfies and video chatting.

The Pixel 2 can hold its own with any sub-flagship from 2017, but when it comes to competing in 2018, you are left with a good device that lacks in many areas, especially when you are still plunking down $650. It has an excellent, but dated processor, only an FHD display resolution, no expandable memory, no 3.5mm headphone jack, and the large bezels and 16:9 aspect ratio that makes the Pixel 2 look dated with wasted display area. The camera is still highly rated camera and its Camera Lens and Active Edge are attractive features, though not too useful at this point. There is no Hi-Res Audio but it does feature stereo speakers on the front. Google added IP67 water resistance this year, but no IP68 rating. The Pixel 2’s best selling point is that it runs a pure vanilla version of Android (for those that like that stuff), and will receive the fastest Android updates out of all Android handsets on the market. The Pixel 2 measures 145.7 x 69.7 x 7.8mm and weighs in at 143 grams. It is available in three colors – Just Black, Clearly White, and Kinda Blue. The Pixel 2 will cost about $650 with 64GB of storage and is available for purchase from the Google Store, Best Buy and as a wireless carrier exclusive through Verizon. If you buy it from Verizon, the company will allow you to finance it over 24 months. 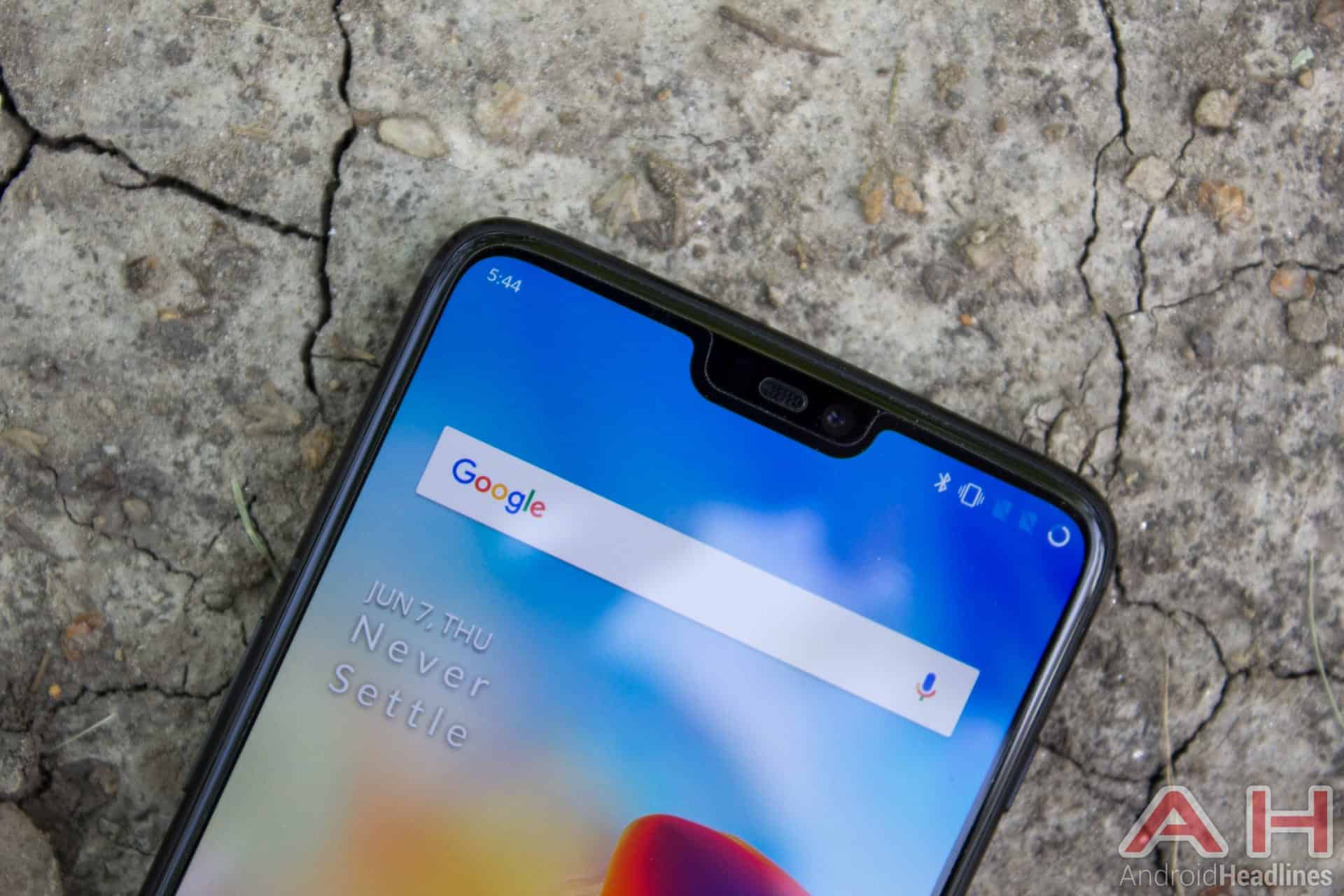 The Google Pixel 2 may get its Android updates faster than the OnePlus 6, but we are crowning the OnePlus 6 as the winner of this competition. The OnePlus 6 has a larger display (albeit with a notch) with QHD+ resolution and the newer 19:9 aspect ratio. It has the newer SD845 and Adreno 630 GPU, more RAM, dual-camera sensors, larger FFC, and a larger battery. The OnePlus 6 has Hi-Res audio for the 3.5mm headphone jack, but only a single speaker. It packs an Alert Slider, Face Detection, and their Sunlight Display.

The Google 2 has a smaller display and still uses the FHD resolution – although, because of the 5-inch display, the PPI of 441 is actually higher than the PPI of 402 found on the OnePlus 6. But having the SD835 and Adreno 540 GPU put it in last year’s technology. It only has 4GB of RAM, has a single camera, that takes great pictures, and only one-half the FFC size as the OnePlus 6. It has a smaller battery, stereo speakers, IP67 dust and water resistance, and no 3.5mm headphone jack. It may get its updates quicker, but the lack of features, slower processor, and higher price of the Pixel 2, make the OnePlus 6 the clear winner.