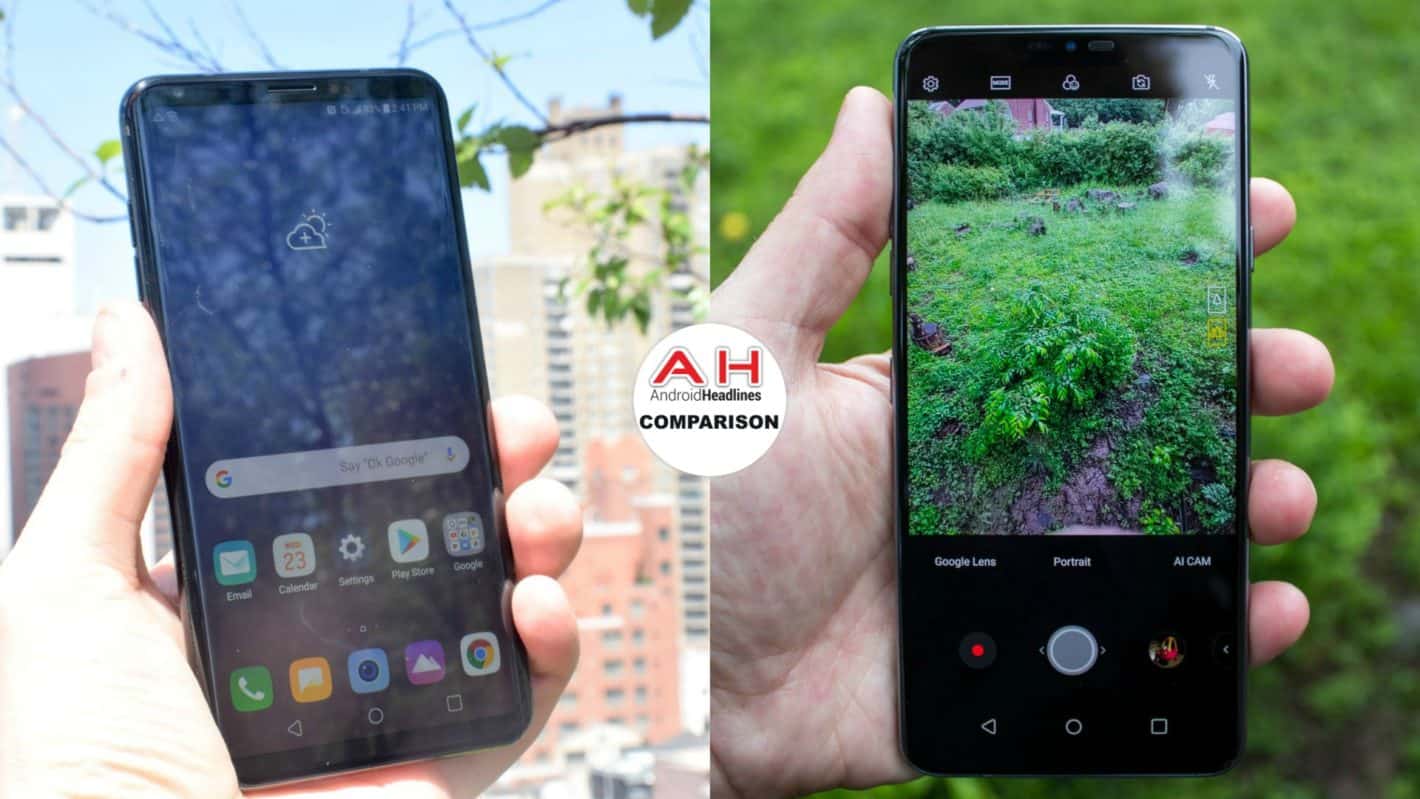 Do we have a good one for you today – the new LG V35 ThinQ takes on the new LG G7 ThinQ. Here we have not one, but two new flagships from LG, the first specifically for AT&T and the second is the LG G6’s replacement. The new phones are some of the best that you can buy, but with very incremental upgrades and one with a notch, it makes us wonder what was LG ThinQ(ing). The LG V35 does use an OLED display and a bigger battery, but the LG G7 is a little flashier in its design, has a dedicated Google Assistant button, and Boombox speaker. The processor/GPU, Memory, and camera are identical on the two models. Which one is a better purchase and are the upgrades worth the prices? These are the questions we will attempt to answer as you first look at the specification sheet below, but first we go through the items they have in common.

The LG G7 ThinQ and LG V35 ThinQ are almost the same phone and design, even physically they are a few milliliters a part. They both use Gorilla Glass 5 on the front and Gorilla Glass 4 on the back of the V35 and Gorilla Glass 5 on the back of the G7, wrapped up with an aluminum frame. They share an IP68 rating and a MIL-STD-810G spec standard. The displays are almost identical in size, use the 18:9/19.5:9 aspect ratio, and a QHD+ resolution. The devices are both running a Qualcomm Snapdragon 845 processor and an Adreno 630 GPU for outstanding graphics, as well as the same 64GB of expandable storage. The dual cameras and front-facing camera (FFC) are both identical. They both have Hi-Res audio for their 3.5mm headphone jacks, although the LG G7 has a better sounding speaker. The LG G7 and LG V35 have their fingerprint sensors on the backside of the device and both have Quick Charge 3.0 and wireless charging built into the device. They both have the usual WiFi, Bluetooth v5.0, NFC, and a 3.1 Type-C reversible port for charging and data transfer. 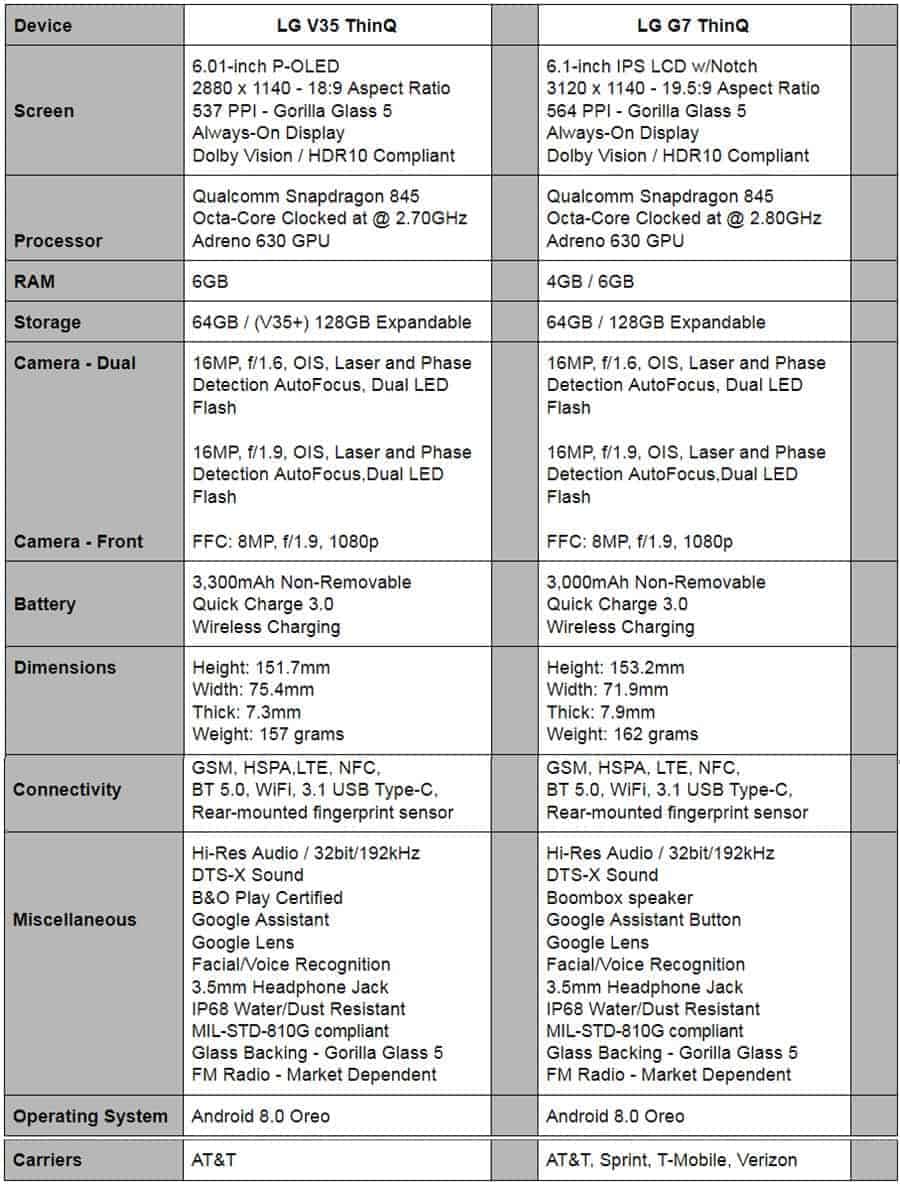 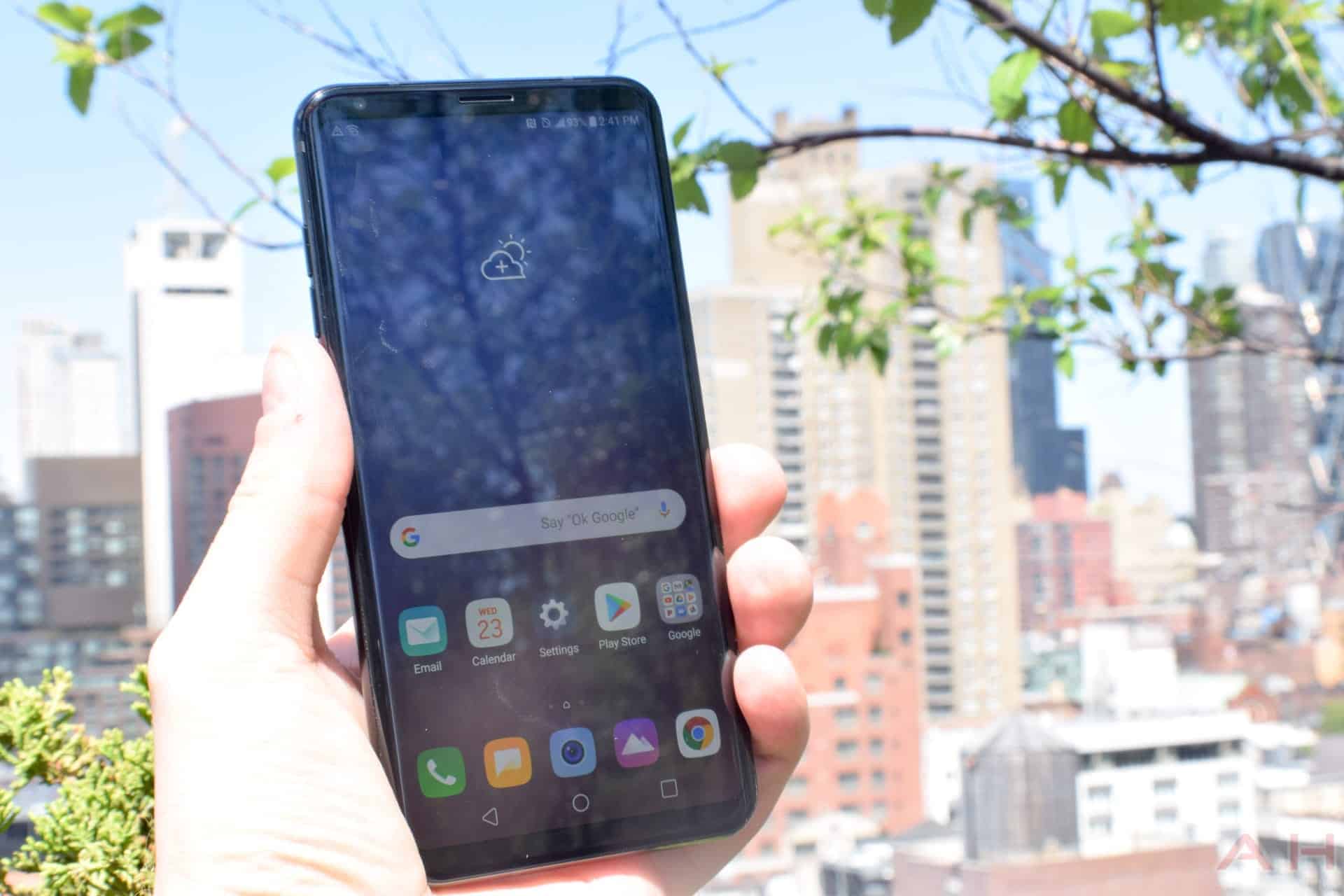 Just after the LG G7 ThinQ started arriving for sale, LG announced another flagship, the LG V35 ThinQ, which is sold exclusively for AT&T and Project Fi – at least for now. These two devices do have a lot in common with large displays, powerful hardware, and identical cameras. The design of the V35 ThinQ is one we have already seen on the V30S and V30. It is a little smoother in the looks department because it is not sporting the iPhone notch found on the LG G7 ThinQ. It feels so light, it almost feels cheap in your hand (so does the LG G7), but other than the logos and new color of the V35 ThinQ it looks identical to the LG V30. The V35 ThinQ is very different than the G7 ThinQ when it comes to the display notch, camera placement, the on/off button, and there is no Google Assistant button on the  V35 ThinQ.

The display stayed the same 6.0-inches with a 18:9 aspect ratio as the LG V30. It even kept the QHD+ resolution using a P-OLED display for better contrasts and blacker blacks. This produces 2880 x 1440 pixels and a density of 537 pixels-per inch (PPI). Gorilla Glass 5 protects it while it continues to include Dolby Vision, HDR10 compliance, and the Always-On display for notifications.

Thankfully, this year, LG was able to go with the best processor – the Qualcomm Snapdragon 845 and an Adreno 630 GPU for outstanding graphics when you are gaming or watching a video/movie with intense graphics. The SD845 is an Octa-Core processor clocked at 2.8GHz, supported with 6GB of RAM and 64GB of expandable internal memory.

LG used the same camera setup and A.I. powered camera smarts it uses in the LG G7 ThinQ, only LG used a horizontal setup in the V35 versus a vertical arrangement in the G7. The primary camera uses a 16-megapixel sensor with a large f/1.6 aperture, while the secondary camera is also 16-megapixel, with a slightly wider angle with a smaller f/1.9 aperture. They use Laser and PDAF, OIS, and LED flash. The primary sensor is used for most of your pictures, but if you want a wider group or landscape shot, you can use the secondary lens. LG really improved the FFC from a 5-megapixel and f/2.2 aperture to an 8-megapixel sensor with a larger f/1.9 aperture for selfies and video chatting. LG kept the same 3,300mAh-capacity battery size and retained Quick Charge 3.0 and Qi wireless charging.

AT&T did not want the notch, so LG accommodated them with the LG V35 ThinQ – oh yes, there is also an LG V30S ThinQ as well. LG went for Gorilla Glass 5 for protection on the front and Gorilla Glass 4 on the back. They kept the 3.5mm headphone jack that will provide the user with terrific sound. Bluetooth is now up to v5.0 and NFC will allow you to perform mobile payments via Android Pay. Android 8.0 Oreo comes on the LG V35 ThinQ out-of-the-box and measures 151.7 x 75.4 x 7.3 mm, weighs in at 157 grams and comes in Platinum Gray and Aurora Black. The device is now shipping for about $900 for the 6GB/64GB model.

It is that time of year again for LG to redesign and rebrand its smartphones this year by adding ‘ThinQ’ on the end of the name. The LG V30S ThinQ started the ball rolling, followed by the new LG G7 ThinQ, and now the newest LG V35 ThinQ. The LG G7 ThinQ has a new updated look that is slightly taller, narrower with edges that are rounded – the evolutionary redesign gives the G7 a sleeker, more modern appearance that raises it up closer to the Samsung Galaxy S9. LG increased the megapixel count on the dual camera setup, but there are still issues that need to be fixed. The LG G6 had a wider angled lens on the secondary main camera, but on the G7 ThinQ, they lessened the angle. Another question – why follow Apple, and its infuriating notch – they are not exactly the most innovative company when it comes to updating smartphones. Their refusal to increase the size of their display, long delays before they switch over to OLED displays, or get rid of the home button are just a few examples of Apple’s stubbornness.

LG also increased the display size from 5.7-inches to 6.1-inches with a 19.5:9 aspect ratio that helps with entertainment viewing and multitasking. It uses a QHD+ resolution FullVision IPS LCD display with 3120 x 1440 pixels and a density of 564 PPI – the same as the LG G6. There is a bump up in protection to Gorilla Glass 5 on the back, while the LG V35 uses only Gorilla Glass 4. LG continues to include Dolby Vision, HDR10 compliance, and the Always-On display for notifications and in an effort to save battery life. It also adds a higher brightness up to 1,000 nits that it can hold for 3 minutes before dropping back down in an effort to save battery life.

When the LG G6 came out last year, LG wanted to beat the Samsung Galaxy S8 to the store shelves, so it had to use the Snapdragon 821 rather than the SD835. LG was able to go with the best processor this time around – the Qualcomm Snapdragon 845 and an Adreno 630 GPU for outstanding graphics. The SD845 is an Octa-Core processor clocked at 2.8GHz, supported with 4GB of RAM and 64GB of expandable internal memory.

The LG G7 ThinQ uses the same dual cameras that the V35 ThinQ packs. They are a set of 16-megapixel sensors for both cameras – the primary camera has a large f/1.6 aperture, Laser and PDAF, OIS, and LED flash. The secondary camera has a slightly wider angle with a smaller f/1.9 aperture. The primary sensor is used for most of your pictures, but if you want a wider group or landscape shot, you can use the secondary lens. LG really improved the FFC from a 5-megapixel with an f/2.2 aperture to an 8-megapixel sensor with a larger f/1.9 aperture for selfies and video chatting. Under the topic of why did LG do it, they decreased the battery capacity from 3,300mAh to a 3000mAh, but retained Quick Charge 3.0 and wireless charging.

It seems that LG had to add a notch on the G7 ThinQ’s display in some attempt to copy the iPhone. They also took away the on/off capability of the fingerprint sensor by placing a typical switch on the side of the device. LG went for Gorilla Glass 5 all around, and kept the 3.5mm headphone jack that will provide the user with virtual surround sound. The improved single bottom speaker will now resonant throughout the chassis to give you what LG calls Boombox sound. Bluetooth is now bumped up to v5.0 and NFC will allow you to perform Android Pay mobile payments. Android 8.0 Oreo comes on the LG G7 ThinQ out-of-the-box. The LG G7 ThinQ measures 153.2 x 71.9 x 7.9 mm, weighs in at 162 grams and comes in Platinum Gray, Aurora Black, Moroccan Blue, Raspberry Rose and it will cost you about $750 for the 64GB model. 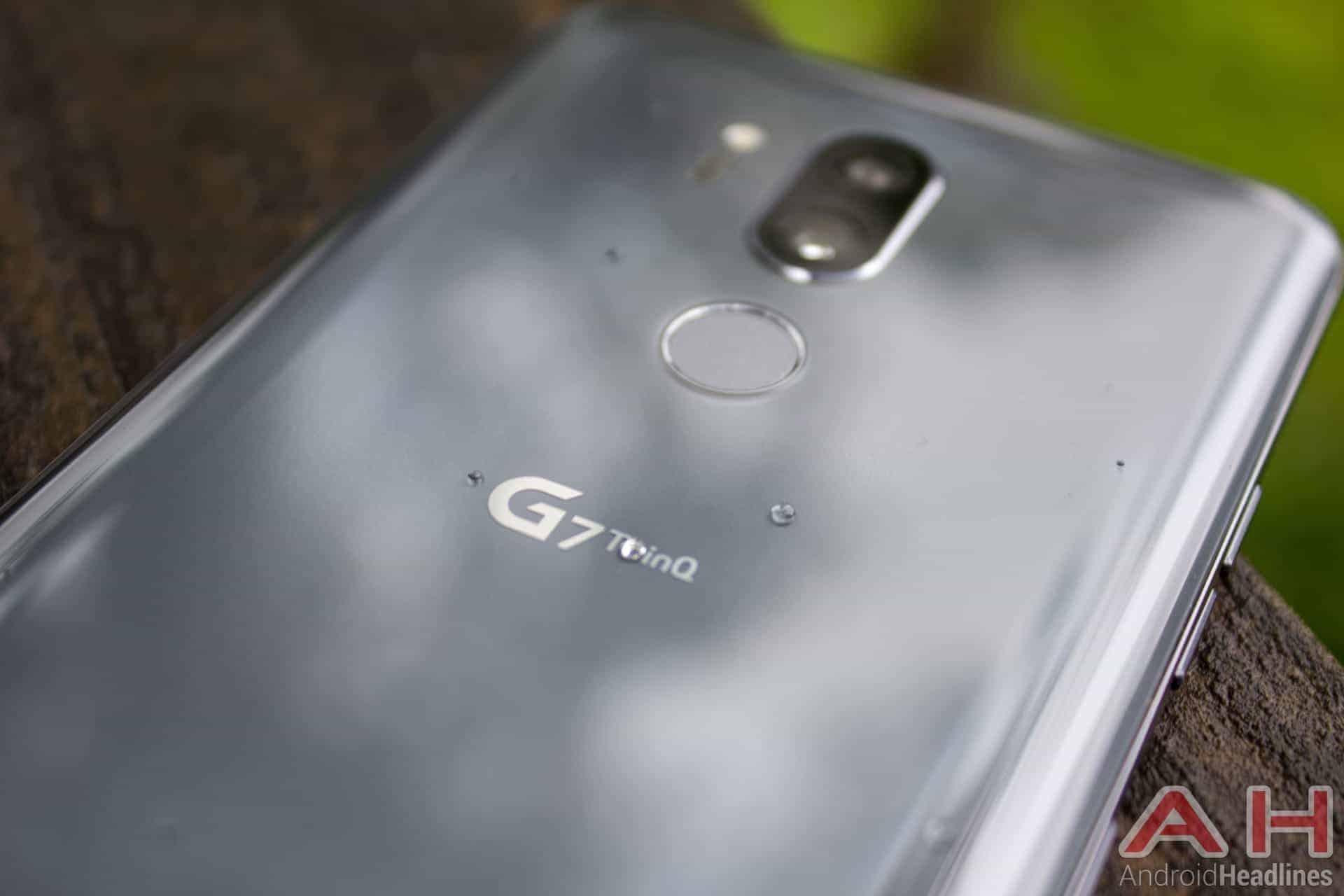 One has to wonder if the marketing department of LG is as confused as their new line of phones – what is a consumer to do? I am picking the new LG G7 ThinQ as the winner of this comparison because it has most of the features of the LG V35 ThinQ and includes a few extras of its own, as well as being available for most LTE networks and it is cheaper. It has the dedicated Google Assistant button, and the better sounding Boombox speaker.

The LG V35 does have a preferred non-notched OLED display, 6GB of RAM, and a larger battery, but it is pricier than the G7 ($900 versus $750) and only available on the AT&T network. If you are on the AT&T network or thinking of switching, and must have the 6GB of RAM, deplore the notch in the display, and have the extra money, then the LG V35 ThinQ should satisfy you.