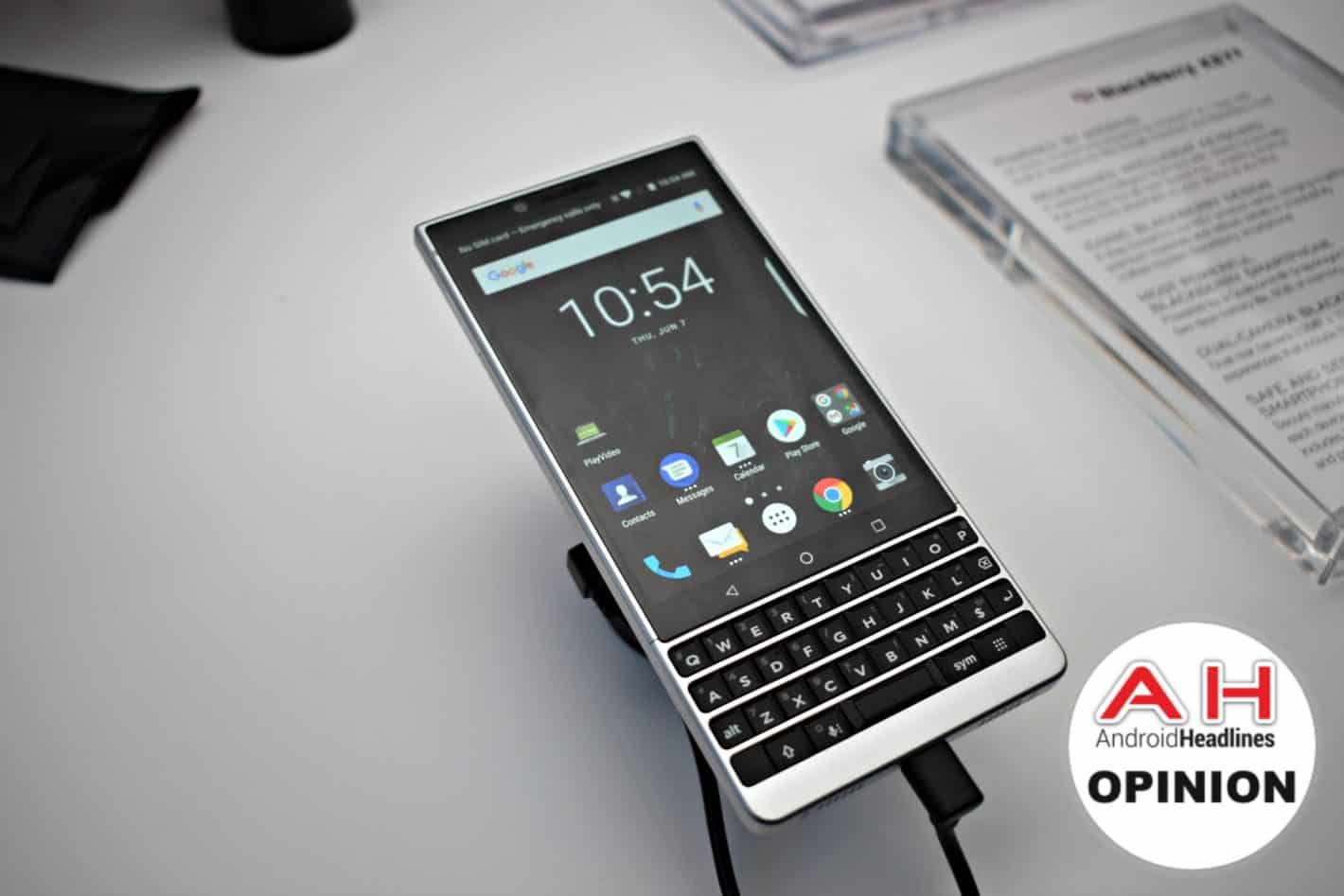 The latest BlackBerry-branded phone is now here, the BlackBerry KEY2, and other smartphone makers can learn a lot from paying attention to BlackBerry and its approach to bringing to market new mobile products. As while smartphones like the KEY2 are not the most spec-heavy handsets currently available, the KEY2 specifically is one that offers consumers something a little different to the rest. Which, in itself is a selling point worth noting, and an additional reason to embrace the BlackBerry brand once again.

There’s no escaping how iconic of a brand BlackBerry is and being iconic — identifiable — in today’s market is becoming more important each year. As whether intentional or not, BlackBerry has stumbled into the Android world right about the same time that all other smartphone OEMs seem to be converging on a singularity approach where their flagship options are all too much alike. Of course, it’s understandable this is happening at the flagship level as OEMs all want to offer the best specs, the best design, and the best phone they can, overall – and this usually means drawing on others for inspiration and in some cases, downright copying features and design cues. So while understandable, it does not take away from the fact that consumers are starting to have less choice than ever before. Yes, you can opt for the latest phone from this manufacturer, or from that one, but in reality, the smartphone market at the consumer level is now comprised of too many shades of grey.

So while the BlackBerry KEY2 is not the best of the best when it comes to specs, there is no arguing against the suggestion it adds color to an otherwise gray smartphone market. In some respects, it is not just a phone from a brand that is different, but it represents the idea that you do not have to follow the market at all. Take the display for instance; nowadays the common understanding is that a new and so-called premium phone must have more display real estate than it did last year. Whether that is by adopting a larger display in general, utilizing an 18:9 aspect ratio, an edge-to-edge design, or a notch, the cardinal theme is more = better. Yet at the same time, BlackBerry Mobile is offering one of the smallest displays on an Android phone, coming in at 4.5 inches. Adding to that, it doesn’t have a notch. So there are two examples of just display-related aspects that are not only different but the opposite of what OEMs currently see as conventional thinking and consumer must-haves. Need another example? The SoC. Most OEMs would not dare release a high-profile smartphone today not powered by Qualcomm’s 800-series, let alone the 845, but that is exactly what BlackBerry Mobile has done with the KEY2 due to the inclusion of a Snapdragon 660 SoC. In fact, it is this processor that will largely determine this as a mid-range and not a flagship device, although with a starting price of $649 in the US, it seems hard to define this as a mid-range option. And therein is one of the market contradictions, as there is now a common understanding that a ‘premium’ or top-tier device must be equipped with an 800-series processor. BlackBerry Mobile seems to think otherwise and this is important to note as the KEY2 is a device designed to be a workhorse device – after all, it’s a BlackBerry. So the ‘stepping-down’ do a Snapdragon 660 is something which BlackBerry Mobile believes is sufficient enough to provide users with the power and processing capabilities they need. Whether rightly or not, the very fact the KEY2 is equipped with a 660 is further evidence of thinking differently and not just including for the sake of keeping up with others. The market as a whole would do well to no longer define premium solely by the processor but the package on offer in its entirety.

Still not convinced? Then how about the keyboard. It’s hard to look at the KEY2 and not see the keyboard, as it is literally the main selling point with the phone. This is again something which is now seen as a complete no-no in the industry. Not only have apps and interfaces moved toward a touch-based interface, but the inclusion of ANY hardware on the front panel is now considered immoral due to its infringing on the must-have larger display – it’s only a matter of time before the last of the front panel hardware (camera, speaker, and so on) is embedded below the display. But there is a missed-logic here as the more display space is only needed if the device is primarily focused on the touch-based interface, and this is where BlackBerry Mobile has been smart as its interpretation of Android is not solely touch-based. The keyboard has not just been included as a means to remind you of who the company is, or to cater to those still living in the early 2000s, but also as an alternative way to engage with the Android interface. Alternative, as in a keyboard-driven user experience. Examples of this were shown off during the launch event with the KEY2 able to jump from app to app by typing the first letter of the app’s name. A point specifically made during the event – you don’t have to rely on a swiping experience with a smartphone anymore. In other words, swiping is not the only option – again, thinking differently.

Security and privacy do indeed now matter. And to be fair this is something that all manufacturers have started to understand, as most, if not all, do usually include some security or privacy-focused features on their new phones. However, BlackBerry does not just include a feature or two but instead shapes its phones around security and privacy. That is a fairly big difference and to further illustrate how big of a difference it is, security and privacy are to BlackBerry as artificial intelligence (AI) is to Google, Samsung, LG, and the rest. While the other companies are shaping their smartphone products around AI and the so-called smarter experience, BlackBerry is shaping its around protecting user data and providing a reassuring experience to its users. In today’s world, something that likely needs little defending or further explanation. This is not to say there are no AI features on offer with the KEY2, as there are, it’s just not the purpose of the phone and this is telling in its own right as the recent mass migration to AI-centric products represents how important AI is to them – the companies. BlackBerry on the other hand, is focusing its centricity on something that actually matters to the consumer. An important distinction as while both approaches favor the companies, one also is designed with the consumer in the now, not in the future.

Of course, many will counter every point made here by saying all of these reasons are why BlackBerry Mobile will not sell many smartphones this year. Further explained by how no one wants a keyboard, no one wants less display, no one wants a lesser processor, no one wants a non-touch-based interface. And maybe they are right. However, to counter those arguments, there are plenty of OEMs currently operating in the ‘singularity mode’ and who are not selling as many smartphones as they think they should be, or the market dictates they ought to be. This is not something that even requires name-dropping as the reports have come in thick and fast over the last few years on the number of high-profile companies who are struggling to keep their mobile businesses afloat due to a lack of sales. This is, in spite of those same manufacturers packing those same phones with all the same features – display-first, best specs possible, notch, and in some cases, an almost iPhone copycat design. So there is definitely something in saying others could learn from BlackBerry and not just conforming to the perceived standards self-imposed on the industry, as playing by those rules is not helping a number of big-name companies. To use a now-famous Apple line, maybe it’s time for those smartphone brands to “Think Different.”