The alleged Sony Xperia XZ3 has just surfaced on GFXBench, or so it seems. A screenshot of the Sony SM H8416 smartphones surfaced on sumahoinfo.com website, but we were unable to track down the listing itself on GFXBench, which means either that it was removed in the meantime, or that it never existed. Having said that, the screenshot provided by the source seems legit, so we’ll go with the first scenario.

In any case, according to GFXBench, the Sony Xperia XZ3 will feature a 5.9-inch 2880 x 1440 display, along with 6GB of RAM and 128GB of internal storage. Android 9.0 aka Android P is also mentioned in the listing, as is the Snapdragon 845 64-bit octa-core processor. A 19-megapixel camera will sit on the back of the device according to the listing, while a 13-megapixel camera will be included on the phone’s front side. That is pretty much all the info that GFXBench shared, though this is not the first time that we’re seeing the alleged Xperia XZ3 out there. Several real-life images of the phone surfaced earlier this month, as did the phone’s spec sheet, though those leaked specs differ a bit from what GFXBench reported. According to the leaked spec sheet, the phone will ship with a 5.8-inch panel, not a 5.9-inch one, and its display resolution will be 2160 x 1080, not 2880 x 1440, so it’s up to you to decide which listing to believe.

As far as the design is concerned, the Xperia XZ3 will resemble the Xperia XZ2 quite a bit, at least if the leaked images are to be believed. The Xperia XZ3 will sport two rear-facing cameras, though, compared to a single camera on the back of the Xperia XZ2. A fingerprint scanner will be included on the back of the device, and the phone will be made out of metal and glass. The phone’s back side will be curved quite a bit, similar to the Xperia XZ2, and the phone will sport rather thin bezels on the front, but those bezels will still be there, similar as on the Xperia XZ2. It remains to be seen how legit all of those leaks and rumors are, though, so take all this info with a grain of salt. 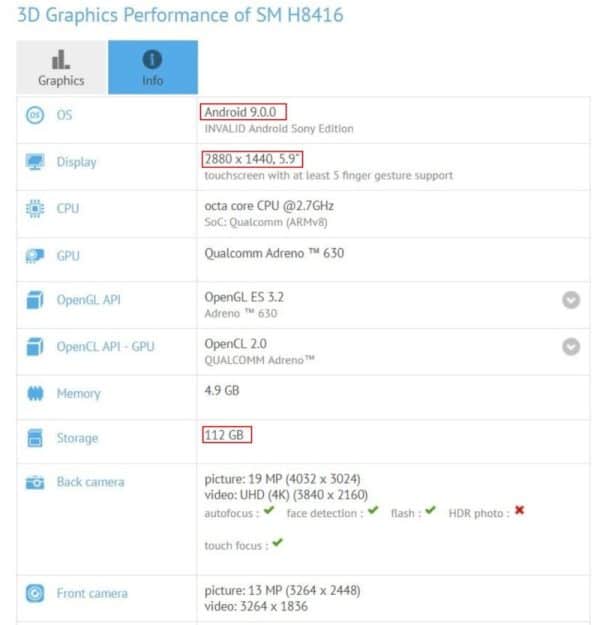