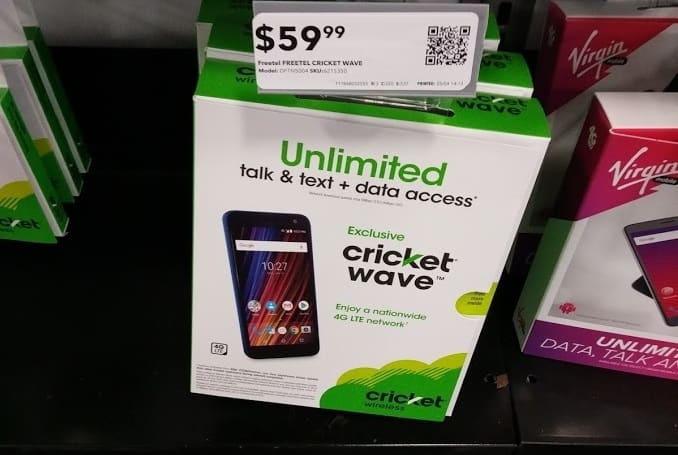 AT&T's mobile virtual network operator Cricket Wireless, one of ZTE's largest carrier partners in the United States, struck a new deal with another budget-conscious handset brand – Japanese Freetel. Wave7 Research reports that the Atlanta, Georgia-based mobile service provider is now selling a Freetel-made handset called the Cricket Wave, a low-end model priced at $59.99. The product still hasn't been listed on the company's online storefront but is already said to be available at select brick-and-mortar locations, as suggested by the image seen above. Cricket said the Freetel partnership has been agreed last year, yet the timing of the first product launch stemming from the collaboration is still indicative of the fact that ZTE isn't irreplaceable if it goes under despite being the fourth-largest smartphone vendor in the United States, some industry watchers believe.

While ZTE also deals in mid-range and high-end handsets, its main stateside strength so far originated from the ability to fill in the gaps in carrier's product portfolios, usually those in the bottom price brackets sold by prepaid service providers. The firm shut down its main operations earlier this month following a denial order issued by the Commerce Department over its failure to discipline employees involved in violations of U.S. trade sanctions imposed on Iran and North Korea despite agreeing to do so last year. The federal regulator also accused ZTE of lying to its investigators on multiple occasions, having banned it from purchasing or licensing any kind of American hardware and software over the next seven years.

President Trump previously confirmed reaching a preliminary agreement with the firm to replace the denial order with a management reshuffle, $1.3 billion penalty, board changes, and other concessions, but his attempt to provide the company with a lifeline is also facing bipartisan opposition from Capitol Hill. Should Congress block lighter ZTE sanctions, China may also end up killing Qualcomm's $44 billion bid for Dutch NXP Semiconductors which is still awaiting approval from Beijing, as per recent reports. Last month, ZTE said the denial order is unfair because the issue it's meant to address was self-reported to Washington and its failure to comply with the 2017 trade settlement was accidental. Without access to Qualcomm's Snapdragon chips and a contemporary version of Android with Google's apps, ZTE is facing bankruptcy in the near future, some industry analysts believe.