Xiaomi had announced that it will host its annual flagship conference on May 31 in Shenzhen, and now some more info regarding the Xiaomi Mi 8 aka 8th anniversary flagship surfaced. The company revealed the date for its upcoming conference earlier today, along with confirming that the Mi 8 aka 8th anniversary smartphone will launch on May 31, and if this new info is to be believed, it will have similar specs to the ones that have been leaking for a while now.

According to the leaked presentation slide, the Xiaomi Mi 8 will sport an in-display fingerprint scanner, while a 6.01-inch display will be included as well. 3D facial scanning will also be a part of the package if this info is accurate, and that will probably be the case as the 3D scanning module surfaced quite recently, not to mention that the device surfaced as well, with a rather wide notch, similar to the one on the iPhone X. The leaked image also says that the phone will be fueled by the Snapdragon 845 64-bit octa-core processor, 6GB / 8GB of RAM, and an “AI Camera”, which is a term Xiaomi used in some of its already released smartphones. The two Mi 8 RAM variants that we’ve mentioned will ship with 64GB and 128GB of storage, respectively, if the leaked info is to be believed. Now, interestingly enough, price points for the phone’s variants have also surfaced, the 6GB RAM variant with 64GB of storage is rumored to cost 2,799 Yuan, while the 8GB RAM model with 128GB of storage will be priced at 3,199 Yuan if the leaked info is to be believed.

As you can see, the phone’s image is also included in the leaked slide, but it’s blurred out, unfortunately, so we can’t really see any design details here. The Xiaomi Mi 8 will probably be made out of metal and glass, as it is rumored to sport wireless charging, just like the Mi MIX 2S. If the leaked info is to be believed, and the phone ends up sporting a 6.01-inch display, well, that would be a rather odd choice by Xiaomi, as the Mi MIX 2S sports a 5.99-inch panel, and pretty much every rumor thus far suggested that the Mi 8 will sport a smaller display, so that it does not conflict with the Mi MIX 2S, not to mention that its predecessors were quite compact. In any case, we’ll find out everything on May 31, when the Mi 8 aka 8th anniversary smartphone will be announced, while the Mi Band 3 will probably make an appearance as well. 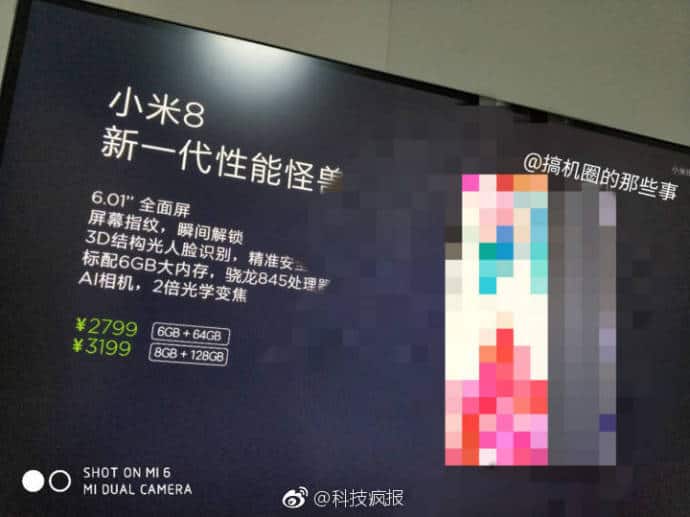 Advertisement
Trusted By Millions
Independent, Expert Android News You Can Trust, Since 2010
Publishing More Android Than Anyone Else
31
Today
67
This Week
582
This Month.
8029
This Year
109501
All Time
Advertisement