Xiaomi has just officially announced its upcoming Shenzhen event which had been teased quite recently, the event will take place on May 31, as some rumors indicated. Now, if you take a look at the provided image down below, you will be able to see an official image using which the company announced this event, and it’s kind of hard to miss a huge number “8” in it. In the caption for this image, the company mentioned both an “8th anniversary masterpiece” and “Xiaomi Mi 8”, does that mean that Xiaomi will skip the Mi 7 and jump straight to the Mi 8 which will also be referred to as the 8th anniversary smartphone that was rumored? All of this is pretty confusing, but one thing is for sure, a new flagship is coming on May 31, as Xiaomi also refers to this press event as its “annual flagship conference”.

Previous rumors suggested that the company will announce the Mi 7, 8th anniversary smartphone, and Mi Band 3 during this event, and that is still a possibility, though it seems like the Mi 8 will replace the Mi 7 altogether. Xiaomi did mention two names in the caption for the image, but that could easily be a teaser, nothing more. Lei Jun, Xiaomi’s CEO, said recently that Xiaomi will announce several products during its Shenzhen event, so we’ll probably see two or three devices announced on May 31, and the Mi Band 3 will almost certainly be one of them. Xiaomi teased its new fitness tracker already by sharing its image via Weibo (Chinese social network). The Mi Band will have somewhat different design than the Mi Band 2, it will sport a more curved design, but the display will stick around. Some gestures for using the Mi Band 3 also surfaced a while back, so it’s possible that we’ll see such navigation pre-installed.

As far as the Mi 8 / 8th anniversary smartphone is concerned, rumors and leaks are claiming that it will 3D face scanning technology similar to the iPhone X. The device will almost certainly be fueled by the Snapdragon 845 64-bit octa-core processor, while it will pack in at least 6GB of RAM. The device is expected to sport a fullHD+ display which will be noticeably smaller than 6 inches, and the phone will include wireless charging, which probably means it will sport a glass back.

UPDATE: Xiaomi has just confirmed via its official Twitter handle that the Mi 8 will be launching on May 31, and that will be a symbolic announcement for the company’s 8th anniversary, so a special 8th anniversary smartphone won’t be a thing. 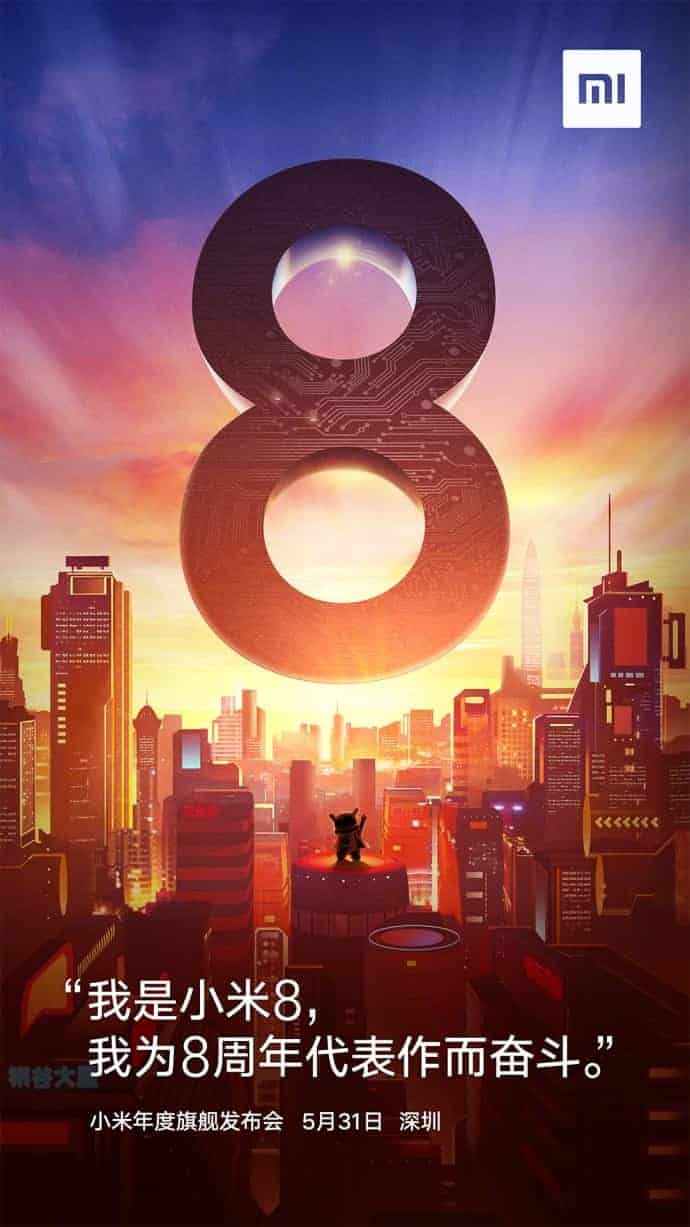 Advertisement
Trusted By Millions
Independent, Expert Android News You Can Trust, Since 2010
Publishing More Android Than Anyone Else
21
Today
21
This Week
401
This Month.
401
This Year
110584
All Time
Advertisement