Tribit’s latest portable Bluetooth speaker has a lot of competition in the small-form market, which tends to be saturated with affordable sound machines that just turn out to be weak or cheap. However, the XSound Go is a speaker that stands well above most on that vast field of failed attempts to cash in on consumer’s need to play music aloud from anywhere. In fact, it may have easily found itself at the top of the pile if not for one or two very small caveats which we’ll cover a bit further down. Better still, the Tribit XSound Go is currently priced at a discount via Amazon, as it can now be bought for $39.99 until June 2, which is more than enough to push itself to the top in its price range for the time being. In fact, at that price, it’s possible that this should be the first consideration for anybody in the market for any type of portable Bluetooth speaker at all. 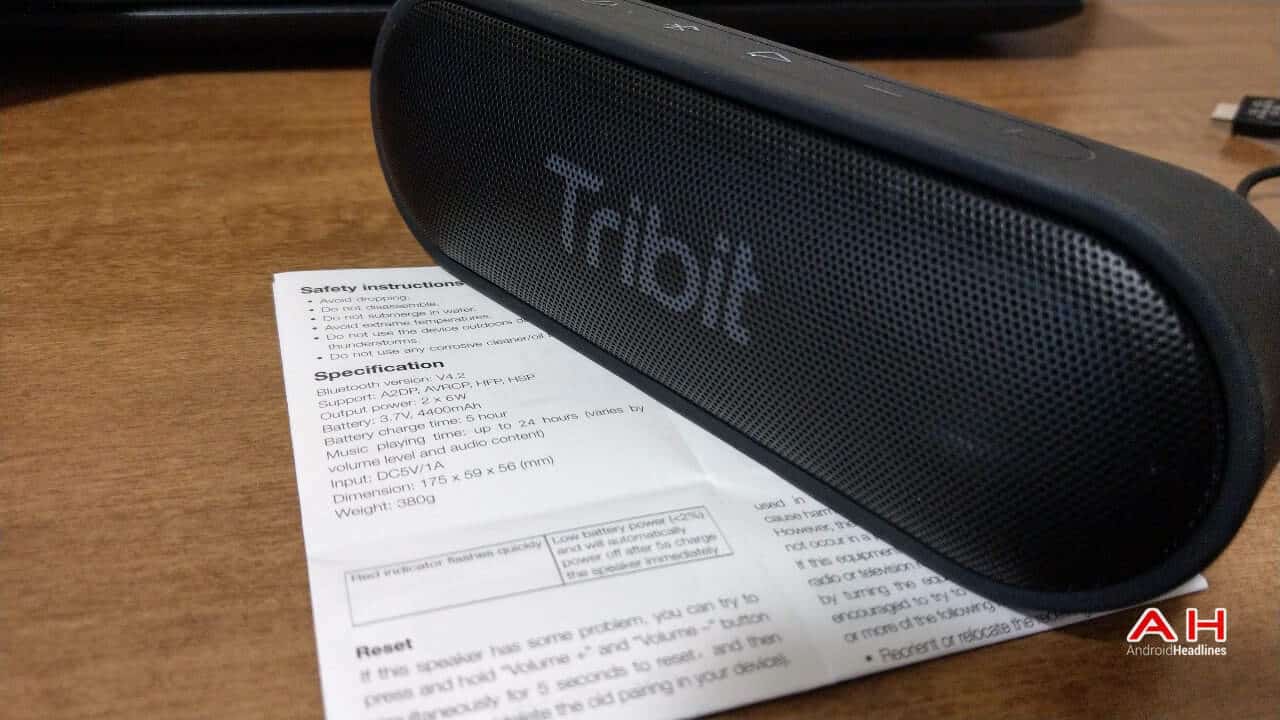 Under normal circumstances, Tribit’s XSound Go is effectively an $80 high-end Bluetooth speaker that already feels like a discount for what it is. Despite measuring just 56mm x 59mm x 170mm and only weighing around 380g, the sound output is not to be underestimated. With a frequency response of 85-20 KHz and an excellent signal-to-noise ratio of ≥80 dB emanating from two 6W speakers via 40mm drivers and a passive bass radiator, this speaker is loud. In our test, we filled an entire 2 bedroom apartment with the sound and it was clearly audible, even through doors. Driving that is a 4400mAh battery, which charges via micro USB at 5V/1A. Bluetooth 4.2 provides a range of 66ft under good conditions, while that whole package is rated at IPX7 for water resistance.

Tribit XSound Go: In the Box 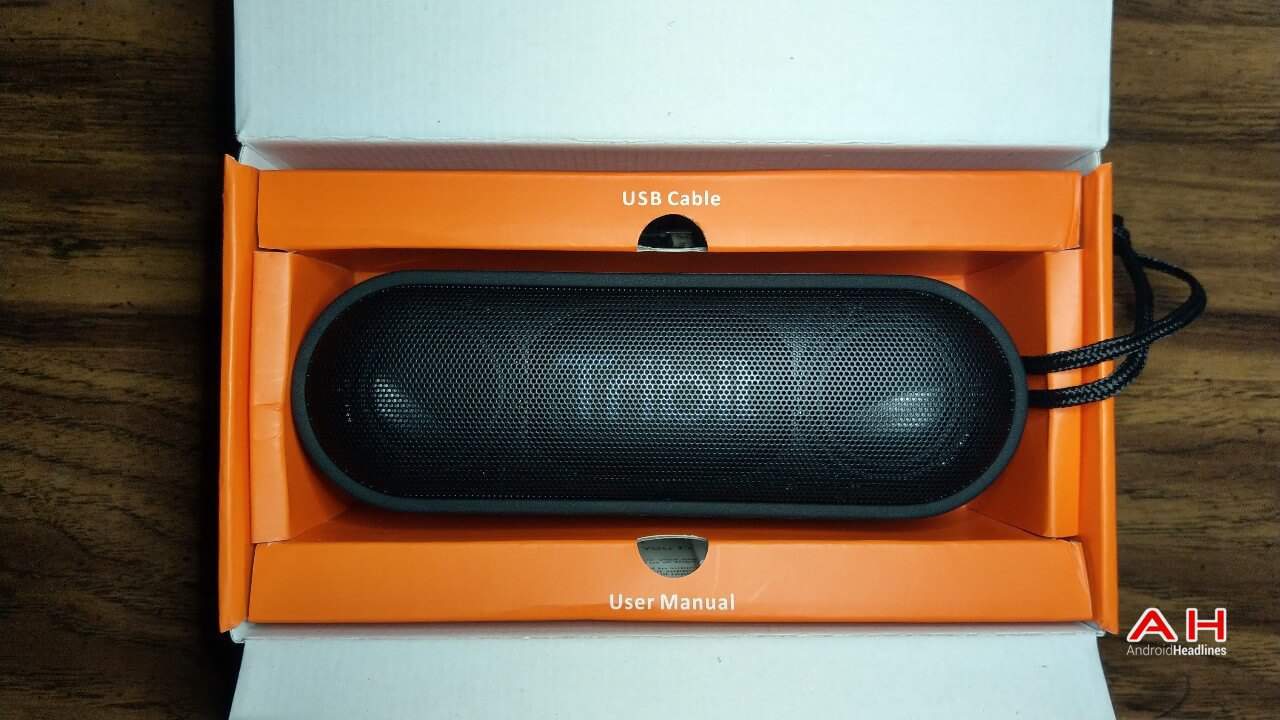 As might be expected, there’s not much in the box with this speaker. Everything is packed neatly, with the speaker visible upon opening and everything else concealed under a second cardboard partition. The cable included for charging is not, unfortunately, accompanied by a wall adapter, though it shouldn’t be too difficult to find a 5V/1A adapter or port to charge it up with. There’s a cord lanyard attached to the speaker right out of the box. The included user manual is a bit confusing since it seems to separate languages along horizontal lines across all pages, rather than by section. Once it’s worked out which sections apply to the buyer, though, it should be fairly helpful for any who haven’t this type of Bluetooth device before. Aside from those items, there is a business card explaining the warranty and another that explains that Tribit will donate a dollar to UNICEF for every user who shares their experience with the product online. The warranty included with this device is a 30-Day money-back, 18-Month replacement warranty, which can be extended by a further year via registration. Lifetime support is, of course, on offer. 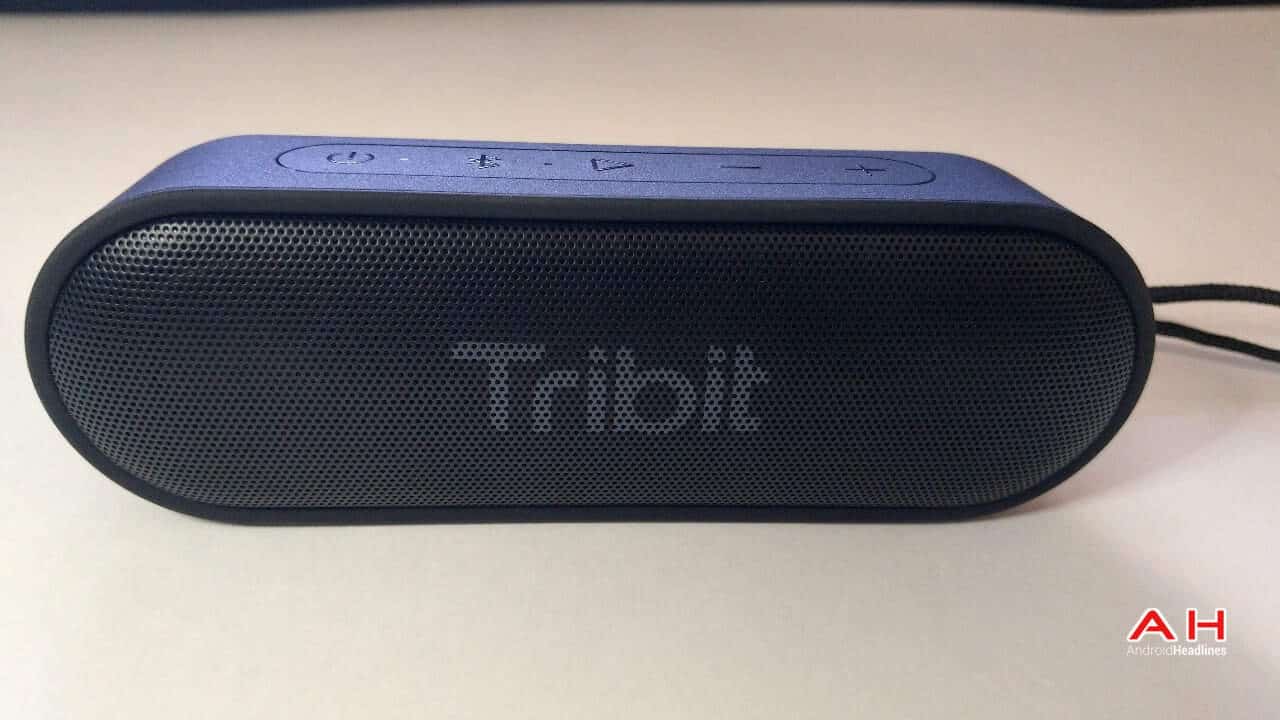 In terms of hardware, the internal specs listed above are built into a soft polycarbonate frame that very nearly feels like rubber. That coats the entire device aside from the front, which consists of a metal speaker grill printed with the word “Tribit” in white. The only obtrusions on the device are the lanyard, slipped neatly into its smooth-edged slot and an oval-shaped slit along the back which also holds the rubber-sealed door to the aux input and micro USB port. Buttons are embossed on top of the device for power, volume control, play/pause, and a manual Bluetooth connect mode. The XSound Go’s built-in mic resides in the center between those. Four rubber nubs serve as feet along the bottom.

Our test unit was black, but there is also a dark blue version of the XSound Go Speaker. The blue version is, in fact, even slightly more affordable, as of this writing. The use of soft-touch materials in matte looks great and doesn’t collect nearly as many particulates as might be expected. Moreover, the matte coloration means that the buttons and branding on the back don’t stick out like a sore thumb. Instead, those are the same color as the body of the device but with a high-gloss sheen. So the whole package looks and feels premium. Button presses are very clicky and solid, while connector plugs all feel as tight as could be wanted without going too far and the protective flap fits snugly in place. Beyond that look and feel, the device has an IPX7 rating. That means, according to the company’s site, that it can be taken in the shower, outside in the rain, and more, without worry about ruining it. Drops and shocks are, however, not part of that and it should absolutely not be submerged according to the user manual. So this is definitely not going to stand anywhere near the top in terms of ruggedization. 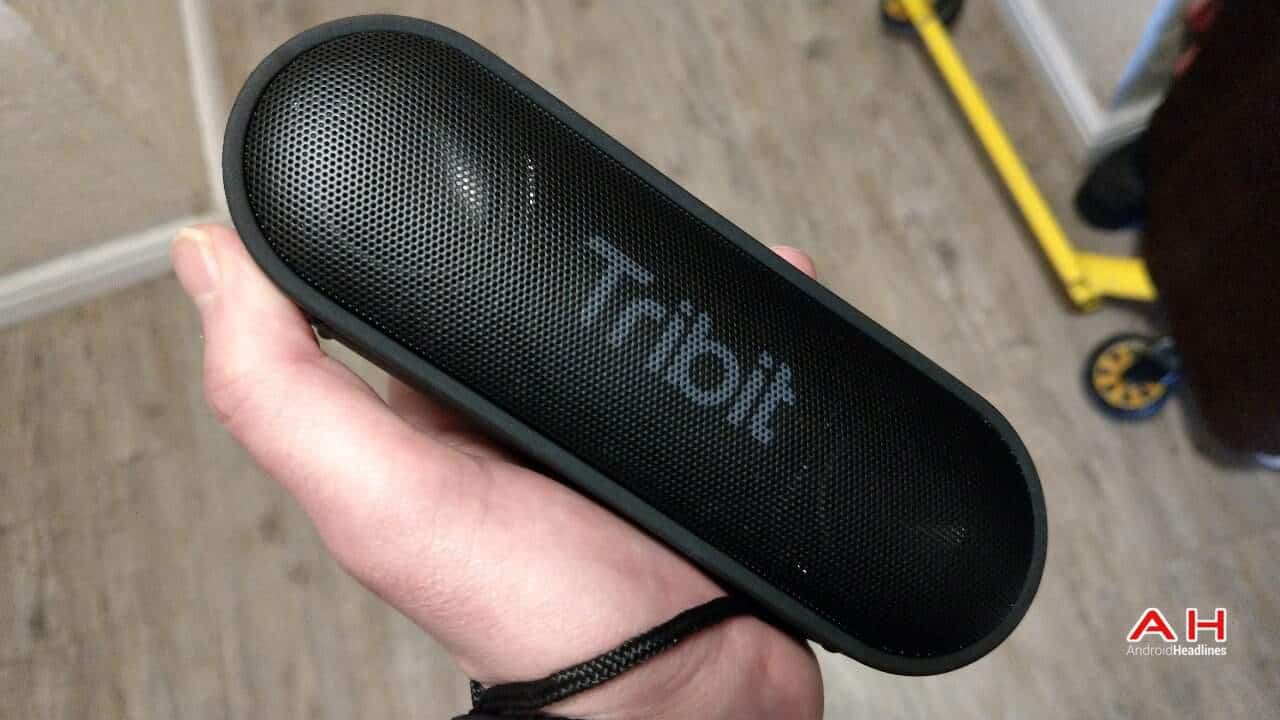 Moving on to sound quality, this device is more than loud enough to fill a 2-bedroom apartment at only half volume. That’s impressive, to begin with, but what’s most impressive is the quality of that audio. Every tone this device is capable of playing is crystal clear at that volume and all the way to the highest volume. It almost feels as though Tribit has artificially limited to volume to prevent blowing out the speakers or distortion. What that means is that every note plays through, regardless of genre or speaker, exactly how it’s intended to. The XSound Go is, it goes without saying, missing a few hertz in the lower frequencies – as some devices and headphones do go a full 60 Hz lower in that regard.

However, thanks to the massive passive bass radiator, those aren’t necessarily missed. Picking the device up while listening to songs with low bass tones results in a hand-shaking rumble that translates to great tone registry when placed on most surfaces. In all honesty, for its size, there is something utterly surprising about the sound-quality pushing forth from this little pillbox of a Bluetooth speaker. Best of all, that audio is well-balanced and doesn’t seem to ever result in tinny or muddy moments in the music playback. That balancing plays over well when listening to other audio as well, so listening to an audiobook or taking a call is easy and natural without distortion. 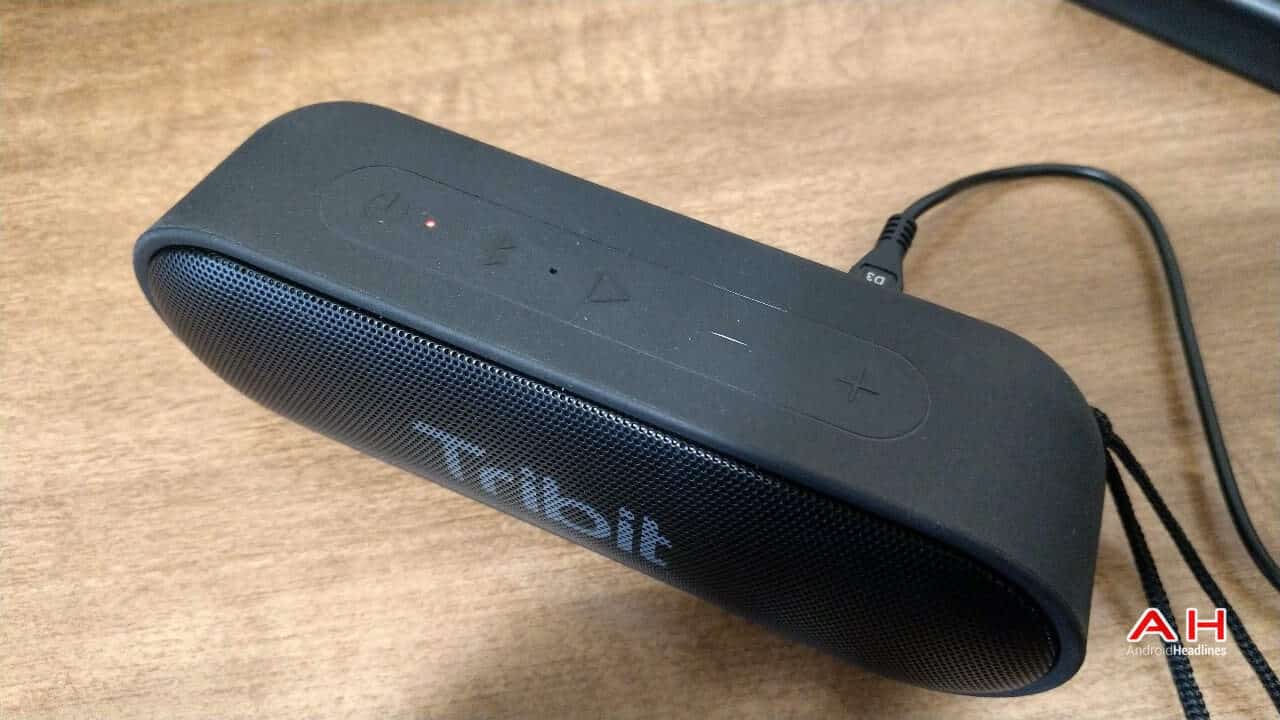 Battery life is yet another area where the XSound Go stands out. While most speakers of its size are only capable of blasting away for around 10 hours at best, it seems as though most of the weight here is in the battery. The power bank is already well above what most flagship smartphones ship with and that delivers a claimed 24-hours of sound. Under testing, at a room-filling level, we actually managed to squeeze slightly more than that out of it but 23 or 24-hours seems to be completely accurate under ordinary circumstances. That would undoubtedly change depending on the distance from speaker to the source, volume, range of audio being played, and more. However, it’s hard to imagine that most parties or gatherings would outlast this Bluetooth speaker. Meanwhile, it only takes around 3 hours to charge. That’s far faster than many competing speakers.

Connecting, as already mentioned can be accomplished over Bluetooth. It can also auto-reconnect with devices already paired to it. But connecting to a new device – the manual seems to suggest that an unspecified number can be connected at once – is very easy thanks to the buttons included atop the speaker itself. Pressing the Bluetooth icon results in the device going into pairing mode immediately. Under the rubber flap on the back, there’s also a 3.5mm AUX plug for direct connections that should provide slightly better battery life. That won’t likely affect quality since Bluetooth 4.2 is already a near lossless protocol standard. That connectivity also allows for voice assistant functionality via the built-in mic, if that’s available on the source device. So users can easily use Google Assistant or Alexa just like any other smart speaker if their source device supports it. 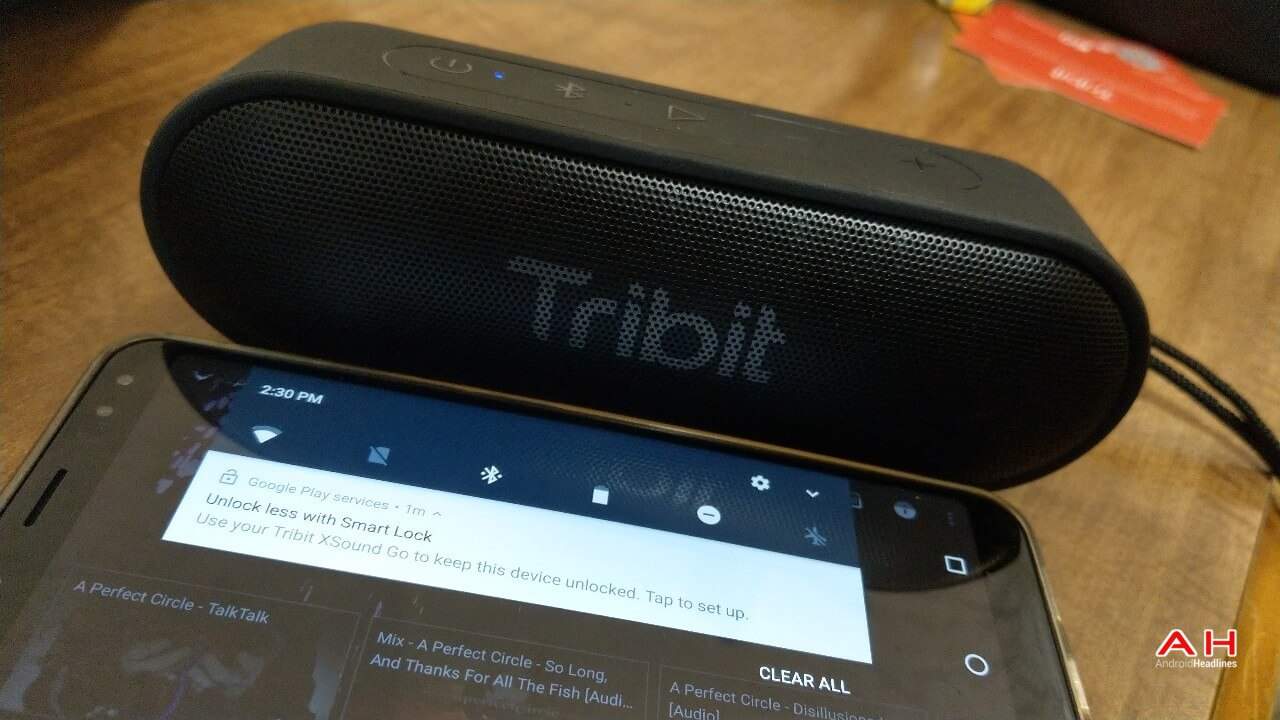 As an aside, we did notice one interesting point when connecting to a Ulefone Power 3, which wasn’t present at all with our HTC U11. While connected to the Ulefone, the speaker’s volume and that of the phone were inexorably linked. Turning up or down the volume on the speaker resulted in that phone’s volume adjusting. That might actually be useful since it means that some kind of equalization can be achieved before using the phone to adjust volume – which won’t change wildly as the volume is tweaked from either. However, it’s not clear if that was a glitch or deliberate since it didn’t show up when used with the other handset.

At this point – at very least leading up until the end of the half-off sale on June 2 – whether or not somebody should buy this speaker is really not much of a question if they happen to be in the market for a small portable audio unit. There simply isn’t much available to beat it and likely isn’t anything at all at the current price. The sound quality, while not perfect, is astounding at any volume and that’s saying quite a lot with how loud the Tribit XSound Go Bluetooth speaker can get. Moreover, it will last for the duration of most listening sessions and won’t require a whole lot of downtime in between them. Water resistance, meanwhile, means that for less than $40 – $80 at full price – those sessions can take place anywhere.