A report from Greenlight Insights claims that VR users want more social interaction on the platform. According to the report, around 77-percent of consumers who were surveyed said that they want virtual reality to be more social than it is currently. What’s more is that the same number of consumers who were surveyed about their VR experiences were asked about how often they use their headsets, which resulted in a varying degree of responses ranging from daily to annually. In fact, about 6-percent of the 4,217 people who were questioned said they only use their headset once a year on average, while about 28-percent said they use their headset on a daily basis.

The largest percentage of course sits around the weekly mark with 39-percent stating that they break out a headset at least once a week. The report does not mention anything about which headsets these are referring to, if any in specific, so it’s likely that it took into consideration consumers who owned any type of VR headset whether it be a PlayStation VR, HTC Vive, or even Daydream View. The report also mentions that those surveyed stated they’d be interested in using their headsets more if there were more social activities available, with things like playing games and watching video being among those activities mentioned.

It’s worth noting that this doesn’t mean there aren’t any social interactions available on VR platforms at all. Quite the opposite. VR Chat is one example of a fairly popular app on Steam that lets users log in through headsets like the Vive and Rift, choose an avatar and a name, and boot into a virtual world to talk with and interact with other users. This is just one example however and it’s a far cry from the types of interactions that some of the questioned consumers appear to be interested in. Video chat is another activity that was listed as a particular area of interest for users. Whether or not surveys like this will lead to more social VR experiences remains to be seen but it seems clear that users want them. 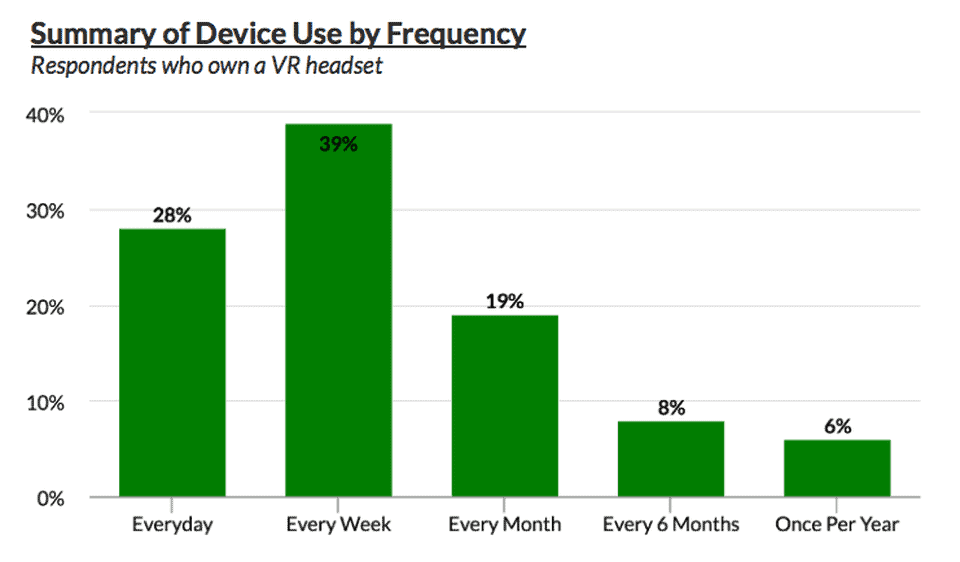