Skip to content
Advertisement
Trusted By Millions
Independent, Expert Android News You Can Trust, Since 2010
Publishing More Android Than Anyone Else
18
Today
145
This Week
409
This Month
5568
This Year
115573
All Time
Advertisement A list detailing all alleged specs of the Snapdragon 710 and Snapdragon 730 leaked online earlier this week, indicating Qualcomm’s new upper mid-range chip lineup will debut a number of industry firsts. The supposed details of the two silicon modules are in line with what Qualcomm said at this year’s Mobile World Congress when it suggested the Snapdragon 700 series is meant to bridge the gap between the Snapdragon 600 mid-rangers and the Snapdragon 800 family of flagship chips.

One of the biggest takeaways from the new leak is that the Snapdragon 730 will supposedly be manufactured on Samsung’s 8nm Low-Power Plus (LPP) process node which the South Korean tech giant finalized in October. Compared to the previously commercialized 10nm LPP solution, the 8nm one enables up to ten-percent lower power consumption and can accommodate more transistors over any given surface area. The Snapdragon 730 will be the more powerful of the two rumored chips, sporting an octa-core processor with a hexa-core Kryo 4xx cluster running at 1.8GHz and featuring 128KB L2 cache, as well as another dual-core configuration utilizing the same cores clocked at 2.3GHz and boasting twice as much L2 cache.

The Snapdragon 710 is said to be built on Samsung’s 10nm LPE process node but will share many characteristics with its more powerful counterpart, including the Adreno 615 GPU running at a maximum of 750MHz which will support HDR10-enabled QHD displays. It’s also said to have a similar processor configuration numbering eight cores in total, albeit clocked at lower speeds and using weaker modules; the two high-performance Kryo3xxx cores of the Snapdragon 710 are said to be running at up to 2.2GHz and feature 256KB of L2 cache, whereas the remaining six ones peak at 1.7GHz and offer half of that memory volume.

Both chips will support LPDDR4x RAM with speeds of up to 1,866Mhz, 32-megapixel cameras, and capturing images from up to three sensors simultaneously due to the inclusion of the Spectra 250 ISP. UFS 2.1 compatibility and support for older storage standards is also part of the package, together with Bluetooth 5.0. The Snapdragon 710 is said to have a Hexagon Vector eXtensions (HVX) for machine learning, whereas the Snapdragon 730 will supposedly match it on that front but also ship with a dedicated neural processing unit for artificial intelligence applications, as per the same source. Qualcomm’s Snapdragon 700 series is expected to start appearing in commercial Android smartphones in the second half of the year. 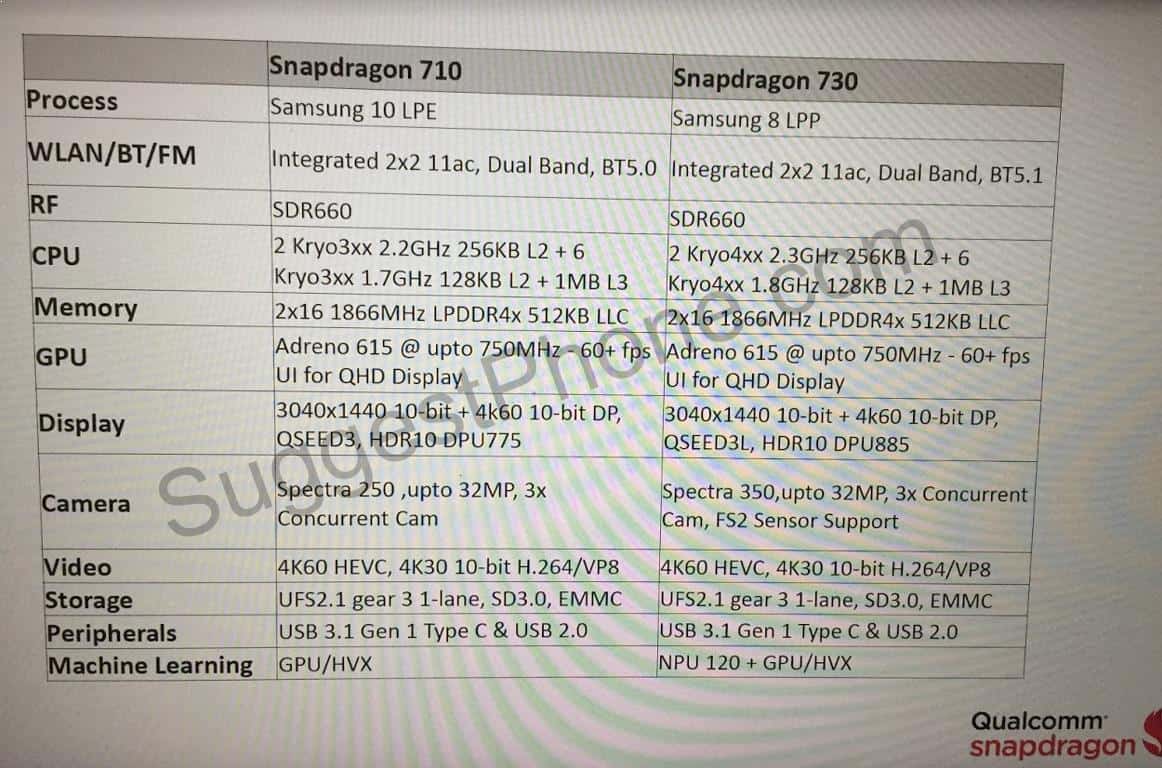