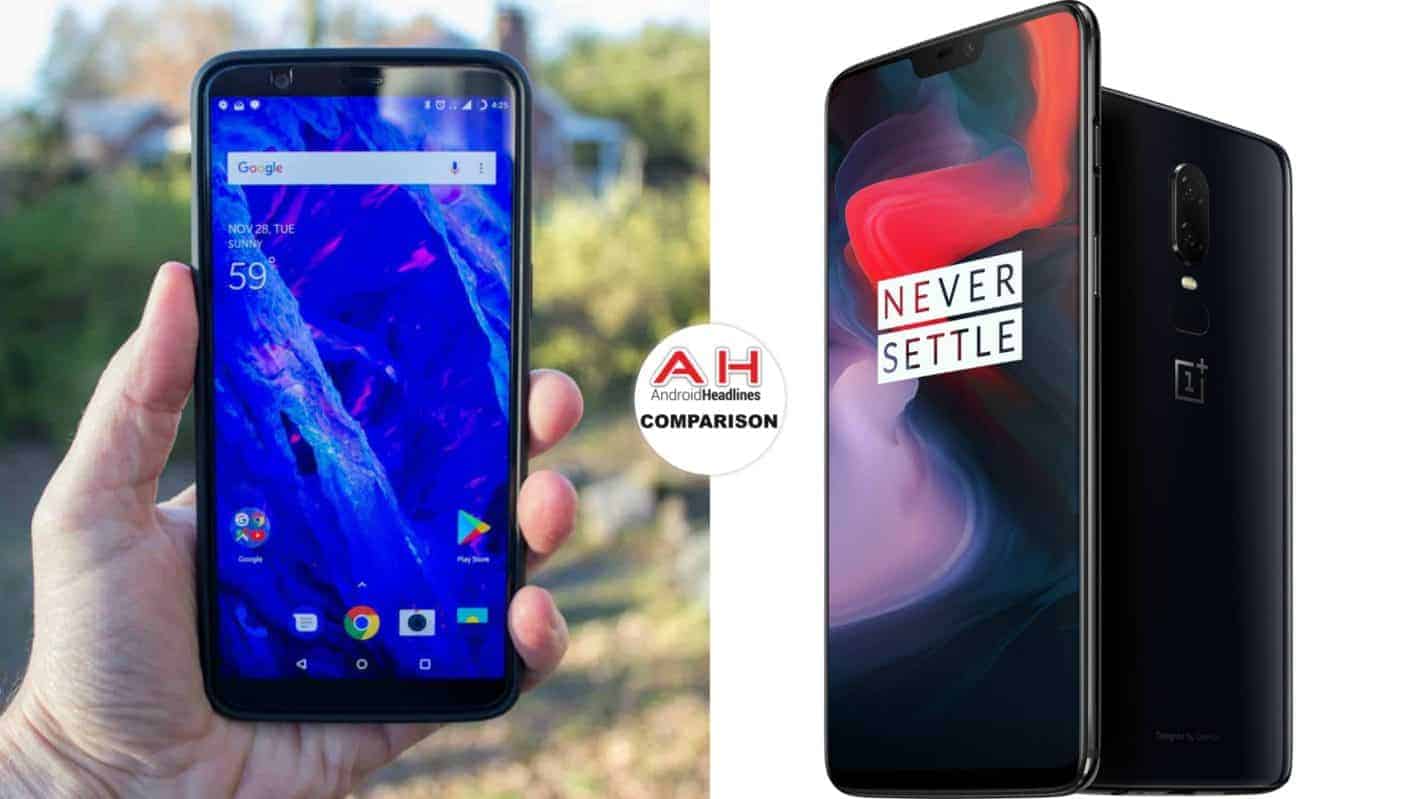 Do we have a good one for you today – The OnePlus 5T goes up against the newly released OnePlus 6. These devices are so similar that one has to ask the question whether or not it is worth upgrading from the 5T to the 6, especially when based on past experiences with OnePlus, there may be a substantial upgrade in six months called the OnePlus 6T. The biggest difference is OnePlus’ move from an all-metal construction to a new glass and metal construction. In their well thought out physical design, OnePlus coated the glass backing that allows the user to enjoy a firmer grip and to keep fingerprints to a minimum. In their not so good display design, OnePlus decided to jump on the Apple cart and added a notch to their display, albeit a smaller one, but one that is totally unnecessary and quite obviously an iPhone copy. Which one of these devices has what it takes to win this comparison? These questions and more are what we hope to answer with this comparison. Before we look at each individual device, let’s take a look at what they have in common.

The OnePlus 5T and OnePlus 6 have several things in common, although the OP6 is upgraded in many areas. They both use the AMOLED display technology, the 18:9/19:9 aspect ratio, and Gorilla Glass 5 for protection with the OP6 incorporating a slightly larger display. Both use a Snapdragon processor and an Adreno GPU, but different models. 6GB or 8GB of RAM is the norm in both devices, as is the 64GB or 128GB of internal memory, but the OP6 also offers a 256GB model – no model offers expandable memory. The dual camera area and 16-megapixel front-facing camera (FFC) are almost identical. The battery size remained the same at 3,300mAh and both come with OnePlus’ Dash Charge for a fast charge for those heavy users, but even after changing to a glass back, no wireless charging is available on the OP6. Physical size is almost the same even though the OP6 has a larger display. Both devices retain a 3.5mm headphone jack, a rear mounted fingerprint sensor – one of the fastest in the business – a single speaker, face detection, and an alert slider. With the OP5T’s upgrade, both devices are running their own OxygenOS on top of Android 8.0 Oreo. The OnePlus models come unlocked to use on both major US networks. 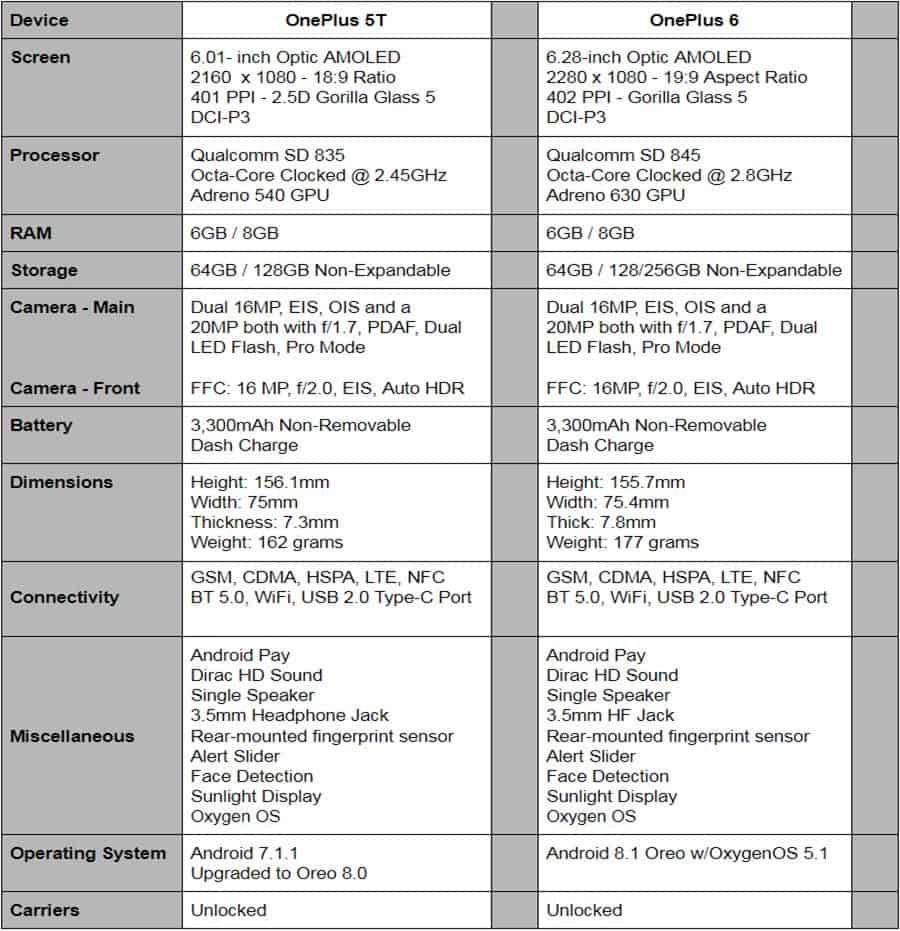 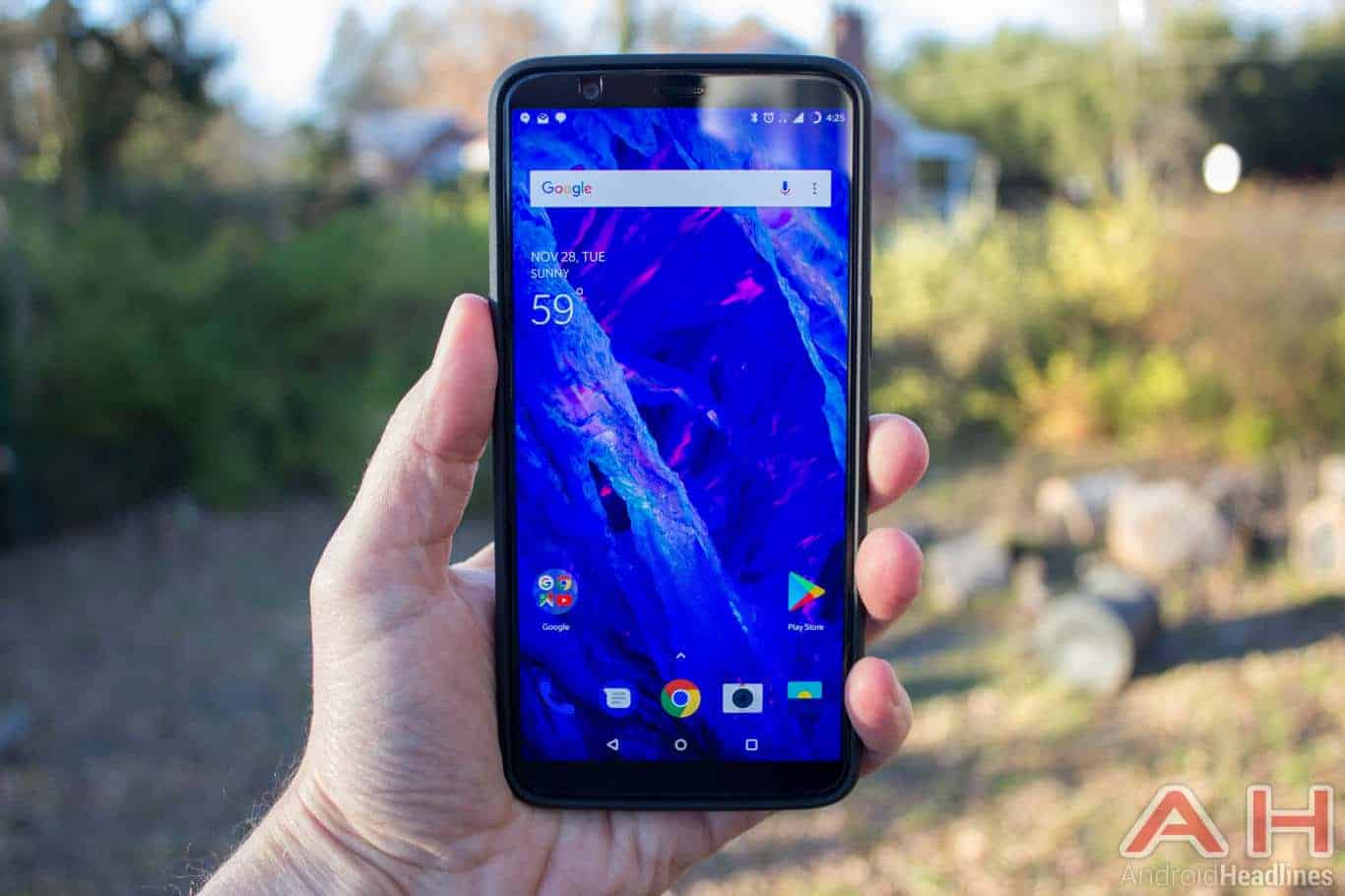 As it is the case with OnePlus, the OnePlus 5T is its upgrade to the OnePlus 5 released earlier in 2017. OnePlus upped the aspect ratio to 18:9 and that gave it an upgrade look to the other new flagships hitting our shores. OP moved the fingerprint sensor to the back of the device that allowed them to increase the display size and offer very small bezels. The OP5T uses an anodized aluminum body that provides a good grip and no fingerprints. Do not look for QHD on the OP5T, as you can only get the FHD+ resolution on an OP. Of course, OnePlus’ great value is in the OP5T with the base model offering 6GB of RAM and 64GB of internal memory for only $500. As with all OP models, there is no expandable memory – you could buy an 8GB/128GB model for only $560. As of this writing, the OP5T is no longer in stock, so if you will have to ‘settle’ for the OP6.

While OnePlus is not afraid to increase the size of their display, they do seem to dismiss the idea of jumping into the QHD resolution. The OP5T sports a nice 6.01-inch Optic AMOLED display and they even changed the aspect ratio to 18:9. This 2160 x 1080 resolution will yield about 401 pixels-per-inch (PPI). The new Sunlight Display makes it easier to view the display outdoors in the sun.

The processing area is where these two devices part ways – the OnePlus 5T uses last year’s Snapdragon 835 and Adreno 540 GPU, and this makes sense since the OP5T came out last year. The SD835 is an octa-core processor clocked at 2.45GHz. The OP5T comes with 6GB of RAM and 64GB of non-expandable internal memory and a second model with 8GB of RAM and 128GB of internal storage. Powering the OnePlus 5T is a non-removable 3,300mAh battery that can charge very quickly with OnePlus’ proprietary Dash Charge.

The OnePlus 5T carried forward the dual cameras from the OnePlus 5, but rather than bringing forward the 36mm telephoto lens, the 27mm secondary lens is used to achieve a bokeh effect. OP also chose to do away with their 1.6x optical zoom and went with the more inferior digital zoom. Both cameras include a large f/1.7 aperture, PDAF, EIS, and a dual-LED flash. The camera software is where OP really made some smart changes by cleaning up the menus and adding a Pro Mode. A large 16-megapixel FFC is used for both selfies and video chatting and has an f/2.0 aperture, EIS, and auto-HDR.

The OnePlus 5T is a well-built and good looking device. It uses the latest Bluetooth 5.0, incorporates NFC, supports Android Pay, still has the 3.5mm headphone jack, dual cameras, packs 6GB or 8GB of RAM, and has the common Type-C port for charging and data transfer. There is still no expandable memory, but the memory upgrade is still at a bargain price. The device measures 156.1 x 75 x 7.3mm and weighs in at 162 grams, and comes in Midnight Black, starting at $500 – although this model is no longer available because of the OnePlus 6. If you have an OP5T, it would probably be worth your while to hold on to it until we see if the OnePlus 6T comes out later this year. 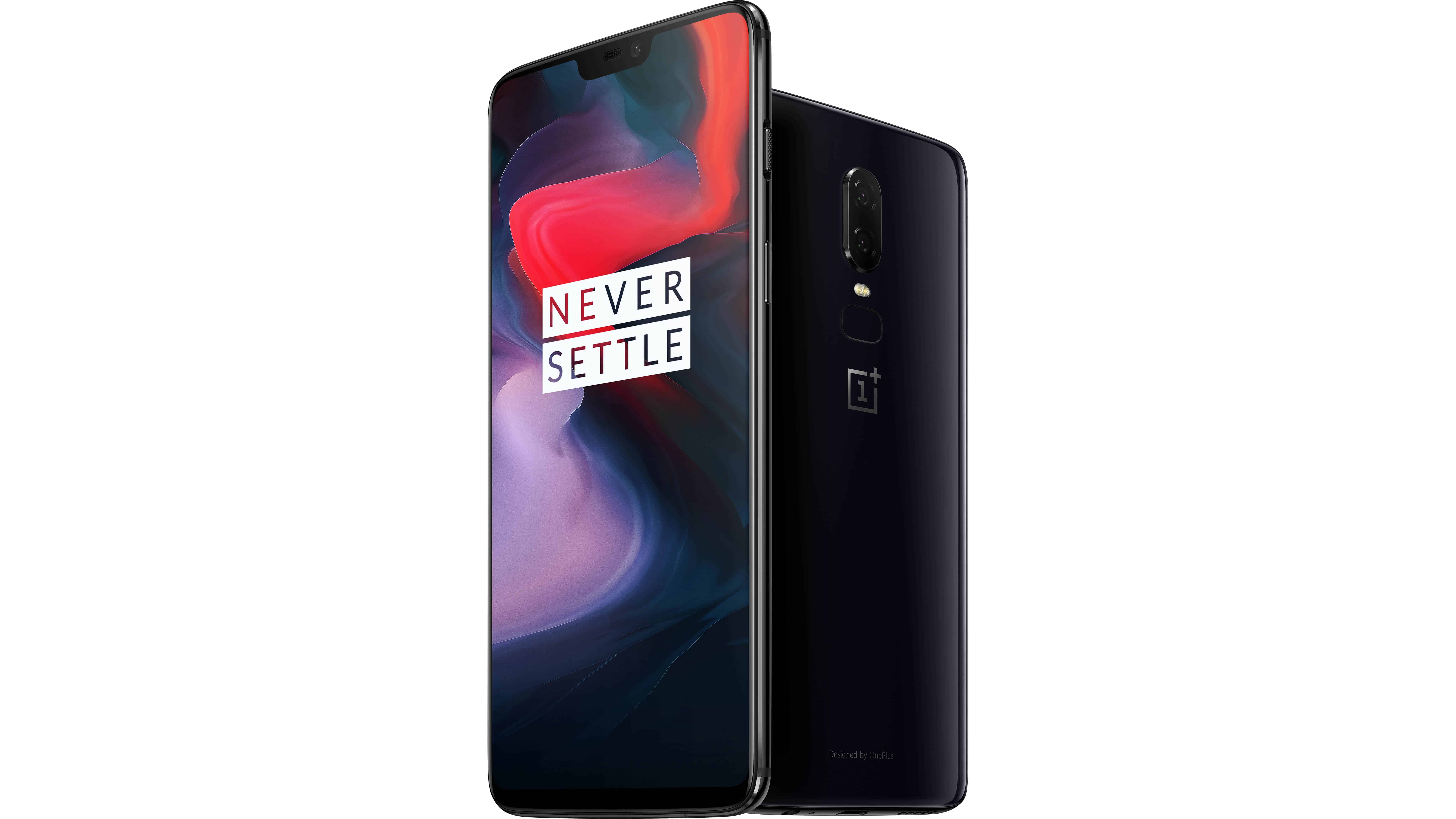 OnePlus just released its entry onto the list of 2018 flagships – the OnePlus 6 to compete with the Samsung and LG models – but with OnePlus, there can always be a chance of a OnePlus 6T ready to debut later this year. This seems to be the year of an evolution rather than a revolution in flagship design. The OnePlus 6, the new LGs, nor the Galaxy S9 look much different from their predecessors. This is not a bad thing because I think we will all agree that they all look pretty damn good. The OnePlus 6 jumped from a glass/metal design to an all glass design with a painted back that accents its metal frame. OnePlus listened to the criticism of the OP5T and added additional functions to the Alert Slider, like zooming in and out when the camera is functioning, although allowing the user the ability to assign more functions to the slider would really be great. OnePlus still refuses to include expandable memory or bumping up to a QHD display resolution. If we have anything to complain about it would be the ‘notch’ in the display. This is OnePlus’ decision to copy from the iPhone – sure, OP’s is smaller and you can ‘hide’ it, but it is unnecessary.

The OnePlus 6 sports a larger 6.28-inch Optic AMOLED display, but this time around it also sports an iPhone notch. It does use the latest 19:9 aspect ratio, giving a taller and narrower footprint, but it also continues to use a Full HD+ resolution of 2280 x 1080 pixels and only 402 PPI – OP just refuses to jump to the QHD display to save money and increase battery life. It does incorporate DCI-P3 technology that is a common RGB color space for digital movie projection. The user can falsely hide the notch by making it look like there is a small bezel across the top, but it is still ‘there’ hiding under the top bezel. Gorilla Glass 5 protects the display from unintended drops.

While the OnePlus 5T uses last year’s SD835, the OnePlus 6 uses the latest processor from Qualcomm, the Snapdragon 845. The SD845 is an octa-core processor that is clocked at 2.48GHz and offers more features and better battery life. It is paired with the Adreno 630 GPU that will handle the most intense graphics and gaming needs. The main model includes 6GB of RAM and 64GB of non-expandable internal memory. If you want more RAM or internal memory, OnePlus sells 2 additional models that pack 8GB of RAM and either 128GB or 256GB of internal memory. What is nice with OP’s pricing it is only $50 for each additional memory upgrade. A 3,300mAh battery powers the OnePlus, and while it is non-removable, you do have OP’s Dash Charge that claims to give you a 63-percent charge of your battery in 30 minutes. There is still no wireless charging even though OP did away with the metal backing and went with glass.

The OnePlus 6 has a new dual camera setup – new in the design as the two cameras are vertical on the OP6 rather than a horizonal arrangement found on the OP5T. It still uses a 20-megapixel main sensor with an aperture of f/1.7, EIS, and OIS. The secondary 16-megapixel camera comes with the same f/1.7 aperture and both cameras use a PDAF, and a dual LED flash. The FFC should provide great selfies and video chats with its huge 16-megapixel sensor that comes with EIS and Auto HDR. The OnePlus 6 does have a better interface that is easier to use and the Alert Slider can now be used to zoom in/out on subject matter.

The most attractive reason to purchase the OnePlus 6 is its price – for $275 less than a Galaxy S9, you get a great looking device, a solid build, and lots of memory. Not only do you get 6GB or 8GB of RAM, you get the same processor, and an excellent dual camera setup with a 16-megapixel FFC. You do not get Samsung Pay, but the next best thing, Android Pay. The OnePlus 6 uses a light-touch on its own OxygenOS on top of Android 8.1 Oreo making it easier for OnePlus to upgrade to the next Android OS. The OP6 measures 155.7 x 75.4 x 7.8mm and weighs in at 177 grams. It comes in Midnight Black, Mirror Black, or Silk White. It will cost you $529 for the 6GB/64GB version, $579 for the 8GB/128GB version, and $629 for the 8GB/256GB version. 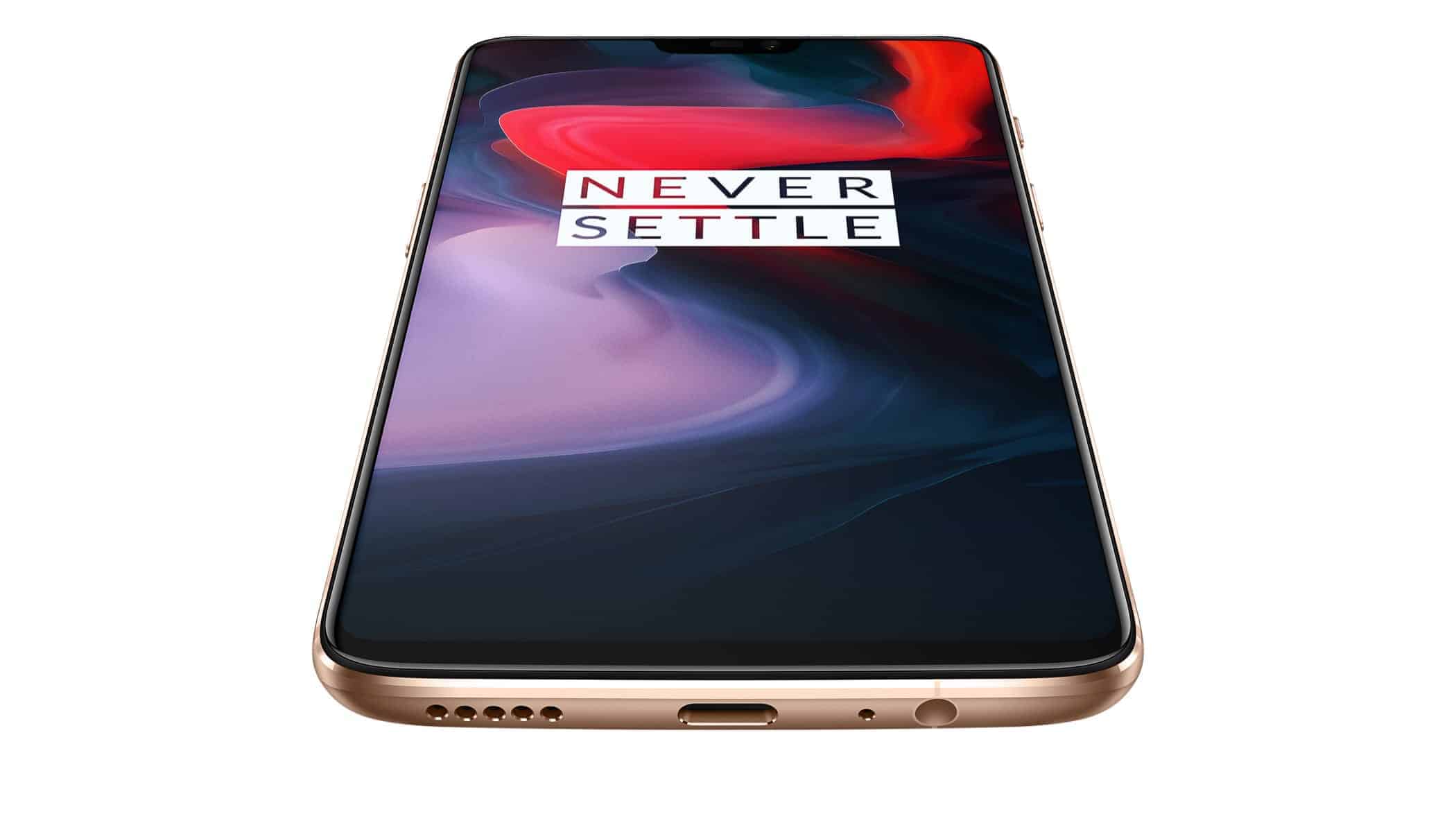 Either one of these devices should satisfy most users, and while there were only incremental upgrades to the OnePlus 6, I am declaring it as the winner of this comparison. Does this mean if you have an OnePlus 5T that you should upgrade to to OnePlus 6 – absolutely not – I would wait to see if OnePlus releases an OP6T later this year.

The main reason I am picking the OP6 as the winner is the price. OnePlus has priced the OP6 so competitively it only makes sense to pick it over the OP5T. The OP6 is strictly an evolutionary upgrade and there is no new ‘must-have’ features on the OP6 that the OP5T is lacking. Certainly, the faster processor and GPU make it more desirable, as does the larger display and improved alert slider, but are those reasons enough to upgrade…probably not. However, if you are looking to buy a new flagship with a solid build, the newest processor, and decent camera, you could do a lot worse than the OnePlus 6 – especially at those prices.