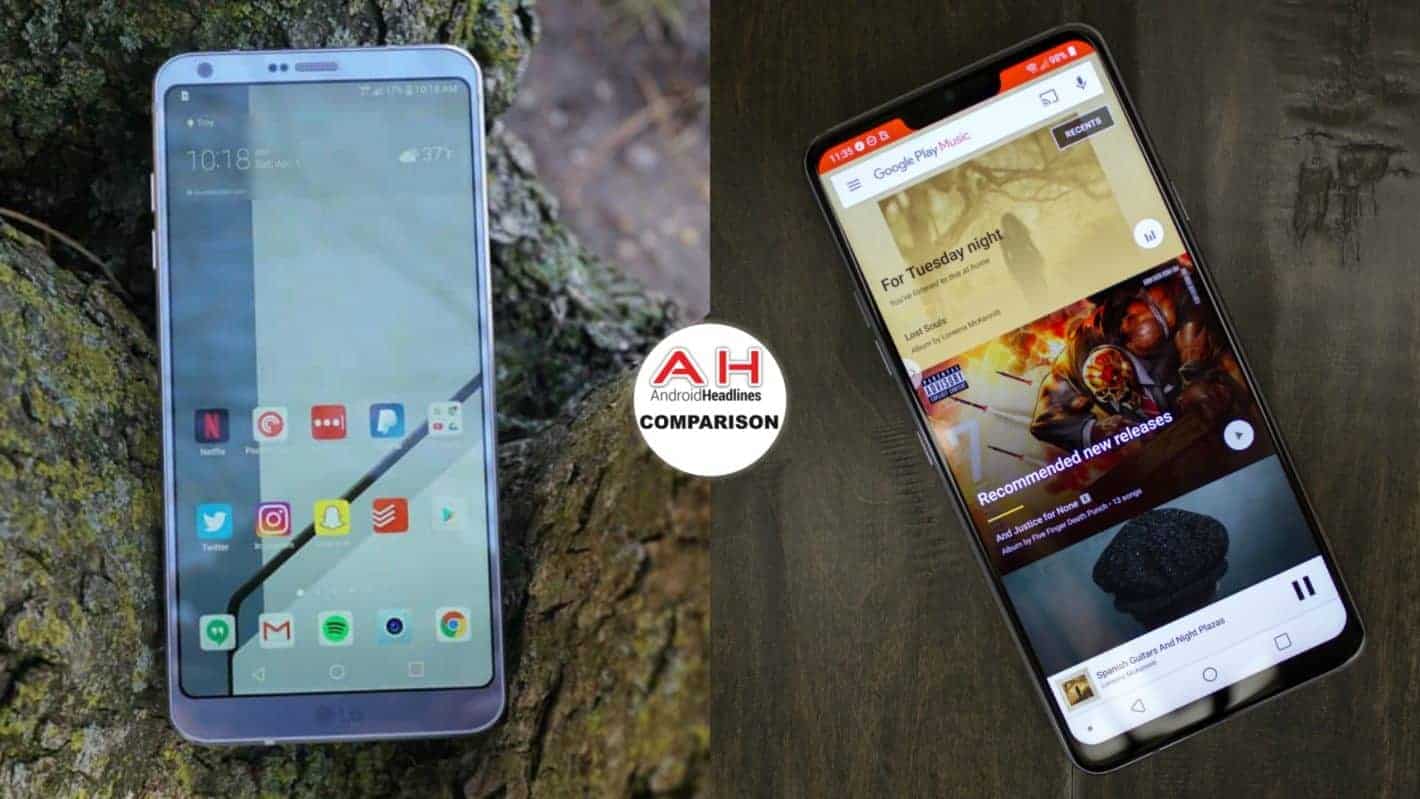 Do we have a good one for you today – we compare the LG G6 to its replacement, the LG G7 ThinQ. Does LG go far enough to make the LG G7 ThinQ the obvious choice? Is it worth upgrading from the LG G6? Like many flagship devices this year, the LG G7 is evolutionary rather than revolutionary. This is definitely a sleeker look to the G7, except for the wannabe iPhone notch in the display. Major upgrades in the front-facing camera (FFC) are great if you are a huge selfie or social media buff. The sound was upgraded, as was Google Assistant with its very own button on the side. If you double press the button, you can trigger Google Lens, or hold it down to summon Google Assistant. More of LG’s SmartThinQ is baked into the phone – this app helps the LG G7 connect automatically to LG’s IoT platform. We will first look at the things these two devices may have in common and then look at each individual smartphone in an attempt to select a winner.

Even though the display is larger on the LG G7, its physical dimensions are almost identical – in fact, the G7 weighs 1 gram less, which may be due to the smaller battery. Gorilla Glass 5 now protects the G7 on the front and the back. The display still uses the LCD technology, still offers the Always-On display, and now offers up a much brighter screen for outdoor viewing. The base model still offers 4GB of RAM, but the G7 starts at 64GB of memory and claims they will offer a model with 6GB of RAM and 128GB of internal memory. Both models offer dual cameras, but the G7 has a few improvements, especial the FFC. Both devices have Hi-Res audio when using the 3.5mm headphone jack, both still only offer one speaker, but the G7 is significantly improved. The usual WiFi, Bluetooth (v4.2 in the G6 and 5.0 in the G7), NFC, Android Pay, 3.1 Type C port for charging and data transfer, quick charge and wireless charging, rear-mounted fingerprint sensor, and non-removable battery can all be found. 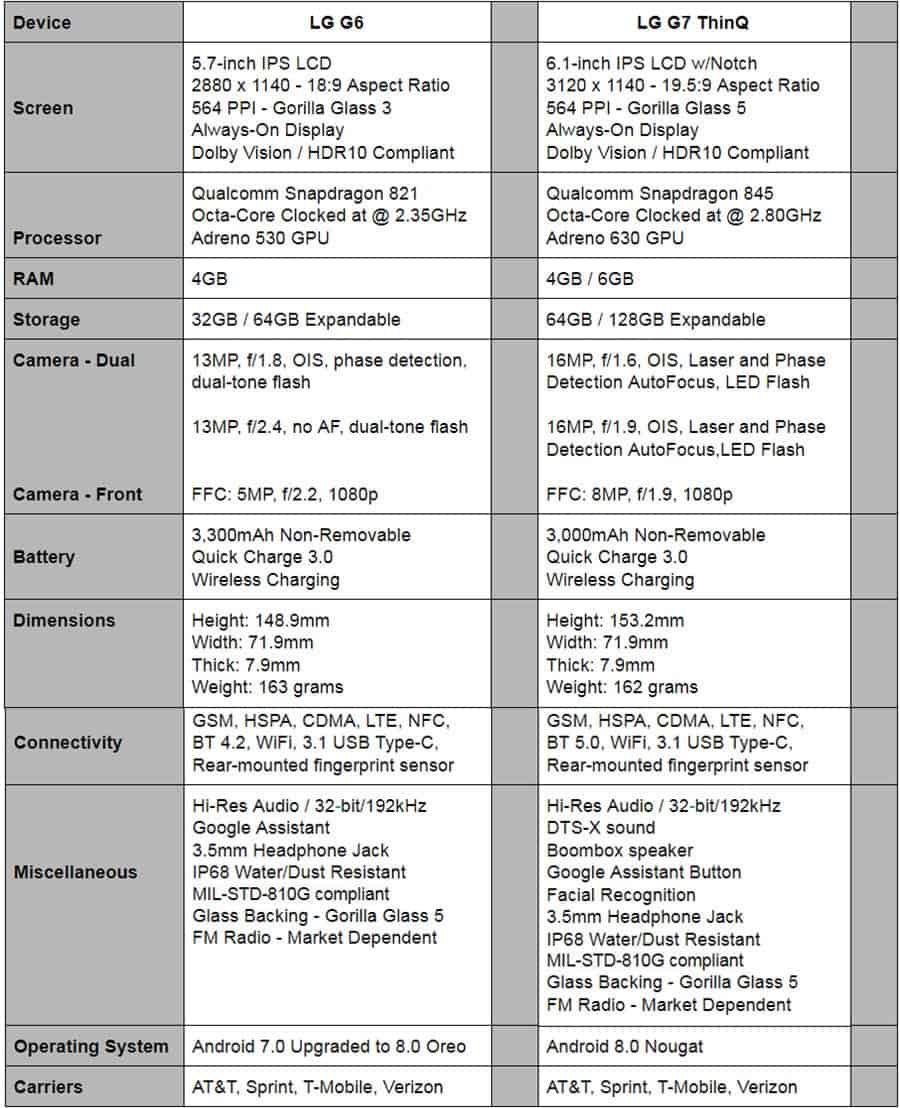 The LG G6 had a complete makeover in 2017 – gone was the modularity and the removable battery, but enter the higher capacity battery, larger display, IP68 certification, improved camera area, 18:9 aspect ratio, and staying were the rear-mounted fingerprint sensor and wireless charging. Let’s see just how it stands up to the new LG G7 ThinQ.

The LG G6 sports a 5.7-inch IPS LCD QHD+ display and a resolution of 2880 x 1440 pixels that pushes out about 564 pixels-per-inch (PPI)(the same found on the G7). The display includes the ‘Always-On’ feature, that saves battery life and adds convenience for the user. This is also the first LG device to jump to the 18:9 aspect ratio – making it a tad taller, but helps when watching movies or multitasking. LG included Dolby Vision and made it HDR10 compliant, while reducing the bezel size.

Because LG wanted to get their new flagship in the stores before Samsung, they had to go with the 2016 Qualcomm Snapdragon 821 quad-core processor. It has a quad-core clocked at 1.6GHz and another quad-core clocked at 2.35GHz that is paired with the Adreno 530 GPU for graphics. This combination provides the user with speed and great graphics, but gives it two year old specs. The LG G6 packs 4GB of DDR4 RAM and a base of 32GB of internal memory that is expandable via a microUSB card.

You will find dual cameras on the LG G6 – the primary camera uses a 13-megapixel sensor with a large f/1.8 aperture, PDAF, OIS, and dual-tone LED flash. The secondary camera is a 13-megapixel wide-angle 125-degree lens with a fixed focus and a smaller f/2.4 aperture. The LG G6 will use the primary sensor for most of your pictures, but those times you want a wider group or landscape shot, you can use the wide-angle lens. The FFC on the LG G6 uses a 5-megapixel sensor with an f/2.4 aperture for selfies and video chatting. LG increased the battery capacity to 3300mAh and added Quick Charge 3.0 and wireless charging.

LG was one of the first manufacturers to move their fingerprint sensor to the back of the phone. With bezels shrinking to mere lines, the fingerprint sensors will stay on the back or eventually move to an onscreen touch area. The LG G6’s fingerprint sensor also acts as an on/off switch as it did on the LG G5. The LG G6 is the first non-Google smartphone to include Google Assistant built into the device. The LG G6 measures 148.9 x 71.9 x 7.9 mm, weighs in at 163 grams and comes in Mystic White, Astro Black, or Ice Platinum. The device is available on all the leading US carriers for about $670 for the 32GB model. 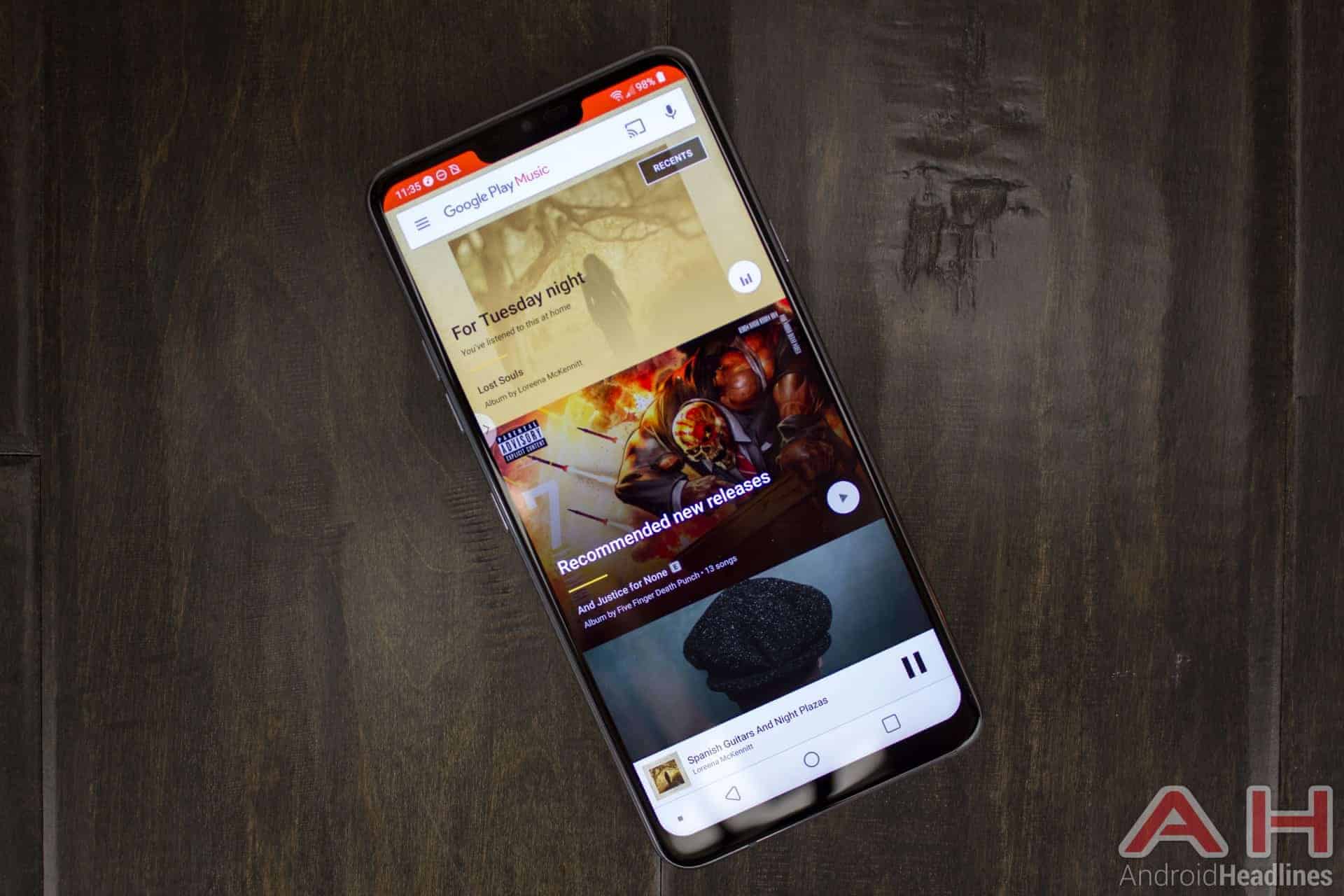 LG is rebranding its smartphones this year by adding ‘ThinQ’ on the end of the name. Just as they did with the LG V30S ThinQ, may we present the new LG G7 ThinQ. It has a new updated look that is slightly taller and narrower and has more rounded edges – the whole package gives the G7 a sleeker, more modern appearance. The dual cameras, while upgraded in megapixels, it has a few issues that need to be fixed, and one has to wonder why they did away with the wider angled lens of the LG G6. Another question – why the notch in the display – why follow Apple, they are the same company that refused to increase the size of their display or switch over to OLED displays or get rid of the home button.

The display jumps in size from 5.7-inches to 6.1-inches with a 19.5:9 aspect ratio. It is a QHD+ resolution FullVision IPS LCD display with 3120 x 1440 pixels and a density of 564 PPI – the same as the LG G6. There is a bump up in protection to Gorilla Glass 5 while it continues to include Dolby Vision, HDR10 compliance, and the Always-On display for notifications. It also adds a higher brightness up to 1,000 nits that it can hold for 3 minutes before dropping back down in an effort to save battery life.

This year, LG was able to go with the best processor for the times – the Qualcomm Snapdragon 845 and an Adreno 630 GPU for outstanding graphics whether it is gaming or watching a video/movie with intense graphics. The SD845 is an Octa-Core processor clocked at 2.8GHz, supported with 4GB of RAM and 64GB of expandable internal memory.

LG upped the megapixels from 13 to 16 for both cameras – the primary camera uses a 16-megapixel sensor with a large f/1.6 aperture, Laser and PDAF, OIS, and LED flash. The secondary camera is also 16-megapixel, with a slightly wider angle with a smaller f/1.9 aperture. The primary sensor is used for most of your pictures, but if you want a wider group or landscape shot, you can use the secondary lens. LG really improved the FFC from a 5-megapixel and f/2.2 aperture to an 8-megapixel sensor with a smaller f/1.9 aperture for selfies and video chatting. LG decreased the battery size from 3,300mAh to a 3000mAh, but retained Quick Charge 3.0 and wireless charging.

LG may have added a notch on the display, but they took away the on/off capability of the fingerprint sensor and gave it the typical side switch. LG went for Gorilla Glass 5 all around, kept the 3.5mm headphone jack that will provide the user with virtual surround sound. The improved bottom speaker will resonant throughout the chassis to give you Boombox sound. Bluetooth is now up to v5.0 and NFC will allow you to perform mobile payments. Android 8.0 Oreo comes on the LG G7 ThinQ out-of-the-box. The LG G7 ThinQ measures 153.2 x 71.9 x 7.9 mm, weighs in at 162 grams and comes in Platinum Gray, Aurora Black, Moroccan Blue, Raspberry Rose. The device is available for sale on June 1 for about $750 for the 64GB model, although preorders are now available.. 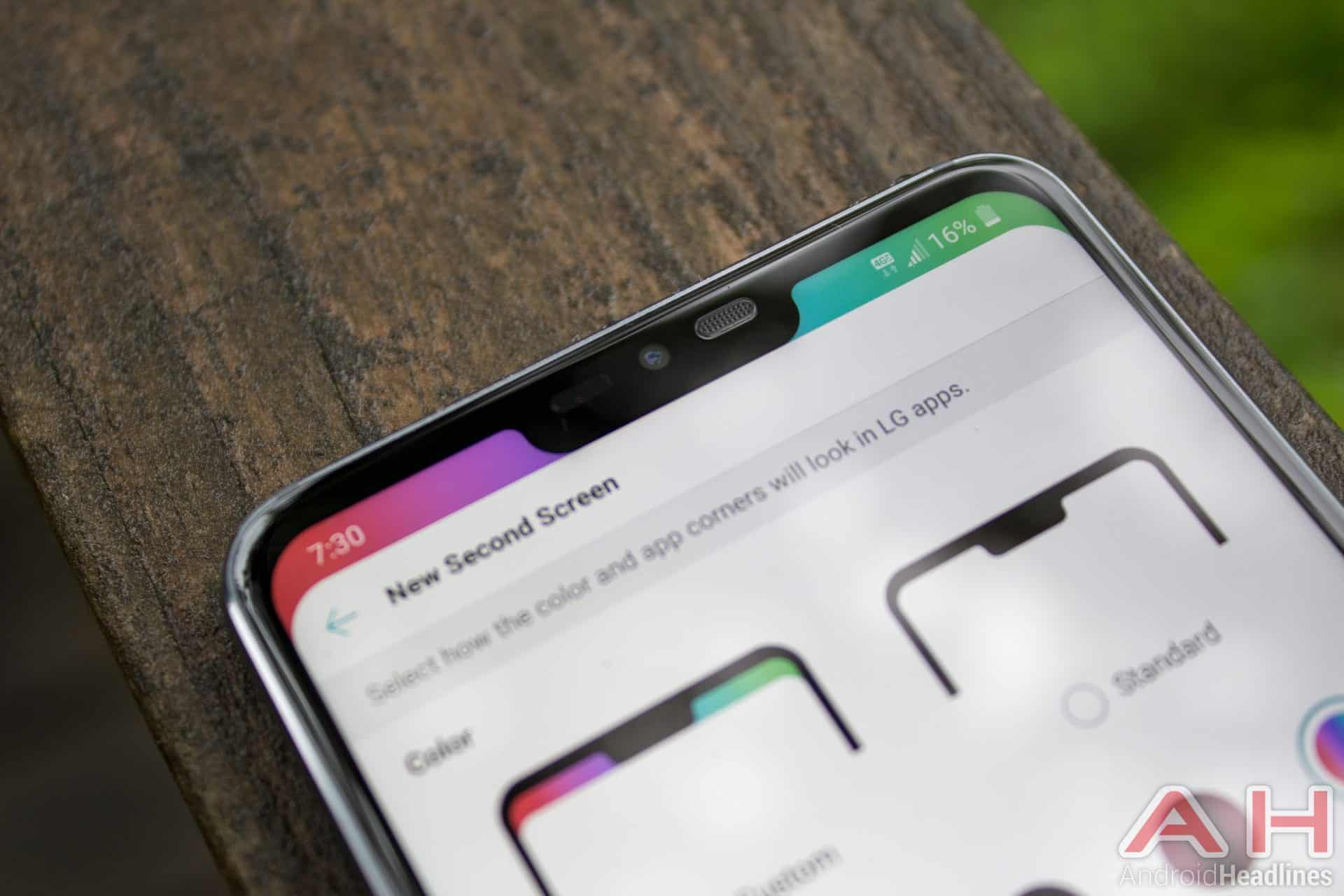 While the the LG G7 ThinQ does not offer too much more than the LG G6, it is certainly worth spending the extra $80 and purchasing the G7 ThinQ. It does have a much faster and more powerful processor and GPU, although, truth-be-told, the user may not notice too much difference except in heavily graphics-intensive apps or if they do a lot of multitasking. The main cameras, although improved, take pictures similar to the LG G6. LG did make vast improvements in the FFC, so selfies and video chatting will certainly be upgraded. When it comes to looks, the LG G7 does look more modern  – it is slimmer with more rounded edges – but oh that notch in the display.

The LG G6 is a fine device that recently received its Android 8.0 Oreo upgrade, takes great pictures with its dual camera, and even has the wider-angle lens as its secondary camera. It packs the tried and true SD821 that runs the phone with no problems. It will cost you about $80 less than the LG G7. If I was to go out to purchase either device today, I would pay the extra $80 and pick up the LG G7 – however, unless you must have a sleeker looking phone, the latest processor, and better selfies, I do not know if upgrading is necessary.