Now, the OPPO Find X name has been trademarked quite recently, the listing says that OPPO did it on April 23, but the news did not pop up until now. Having said that, the listing shares only the name of the device, nothing else, so all we can do at this point is guess what is the company planning to announce. Based on its name, this will definitely be a smartphone, and it could even be the company’s new flagship. OPPO’s ‘Find’ series of devices was not reserved exclusively for flagships, but the company did not exactly introduce a high-end device for quite some time now, the company’s most powerful devices in the last couple of years are fueled by Qualcomm’s Snapdragon 600 series processors. The OPPO Find 7 was a large smartphone back in 2014, it sported a 5.5-inch QHD display, which was considered to be quite large, and it arrived with the Snapdragon 801 processor. In addition to that, the phone packed in 3GB of RAM and a 13-megapixel rear-facing snapper.

Now, the OPPO Find X may end up being the company’s flagship handset, and if that ends up being the case, and OPPO actually announces it in the coming months, then it will probably be fueled by the Snapdragon 845 64-bit octa-core SoC by Qualcomm. The phone will almost certainly arrive with at least two cameras on the back, while its display will be quite large. We’re guessing that the OPPO Find X’s bezels will be quite thin, while the device will ship with OPPO’s ColorOS skin, which will be applied on top of Google’s Android operating system, of course. It is also unknown when will this smartphone become official, but more info will probably surface soon. 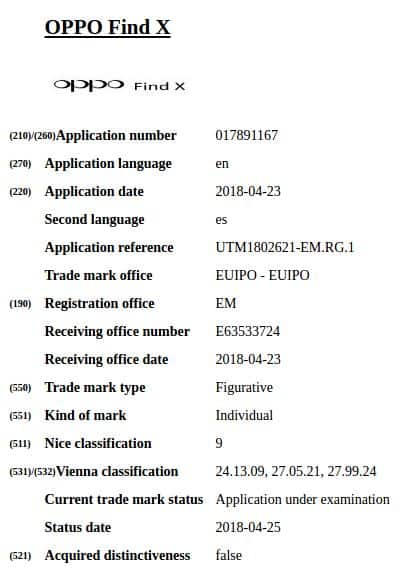