OPPO on Friday touted another industry first in the mobile segment, having demonstrated a new type of a video calling solution based on experimental 5G and 3D structured light. In collaboration with Qualcomm, the company managed to conduct the world’s first video call using such technologies, with the end result being a 3D portrait image of conferencing users being projected on their smartphones in real time. The experiment utilized a modified version of the OPPO R11s Android smartphone which featured a custom-built structured light camera capable of three-dimensional depth sensing, with the configuration being somewhat similar to the front-facing camera found on Apple’s iPhone X.

Instead of a traditional video feed, the experimental video call projected only the 3D models of the callers, with such a heavy processing task being enabled by the next generation of mobile networks. OPPO recently joined forces with Qualcomm in the wireless segment, having already committed to delivering 5G-enabled Android handsets in 2019. Last month, the company announced the establishment of a new research institute focused on artificial intelligence and 5G technologies, with its latest advancement in the field now being almost ready for commercialization. 3D structured light solutions will hence debut in OPPO-made smartphones in approximately half a year, the company said.

The fact that such advanced modules will soon make their way to the firm’s smartphones won’t necessarily allow for consumer-ready video conferencing similar to what OPPO demonstrated earlier today, with recent estimates not expecting 5G networks to be available on any significant scale prior to the second half of 2019. 3D camera modules themselves remain costly to commercialize but are still likely to start being implemented into more devices in the near future. Samsung is said to be researching one such solution that may be integrated into the Galaxy S10 lineup next year, with its reported imaging partner on the project being Israeli company Mantis Vision. 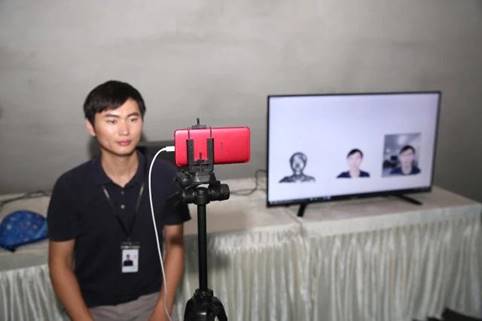