Sprint has started rolling out the Android 8.0 Oreo update to its LG G6, becoming the second American carrier to do so. The LG G6 is the OEM’s flagship smartphone from 2017 and although it’s no longer the latest and greatest, it still packs high-end specifications which should deliver a premium performance. The smartphone launched with Android 7.0 Nougat and recently started getting a taste of Oreo in Europe and the United States. Verizon was the first U.S. carrier to push the update a couple of weeks ago, and Sprint is now following suit.

The update is rolling out to Sprint customers who have the LG G6 with the model number LS993. The package weighs in at 1.8GB and also contains the latest Android monthly security patch dated May 2018. The update brings the OS to the newer Android 8.0 Oreo version and adds some performance optimizations, along with the various tweaks, changes, and new features that Oreo has to offer. The May 2018 security patch, meanwhile, aims to ensure that the device is protected against the latest cybersecurity threats. It’s highly advised to install such security updates as soon as they become available for obvious reasons.

The LG G6 launched sporting a 5.7-inch IPS LCD FullVision panel with a resolution of 2,880 x 1,440 pixels, an 18:9 aspect ratio, and thin bezels for a high screen-to-body ratio. Under its hood is Qualcomm’s Snapdragon 821 processor with an Adreno 530 GPU and 4GB of RAM. Storage options include 32GB and 64GB, expandable with the help of a microSD card by up to 256GB. Other specs include a dual rear camera setup made up of two 13-megapixel sensors, a 5-megapixel front camera, and a 3,300 mAh battery which isn’t user-removable. The update to Android 8.0 Oreo should significantly improve the overall experience of the LG G6, and the other two major carriers in the United States – T-Mobile and AT&T – are expected to roll it out in the near future as well. 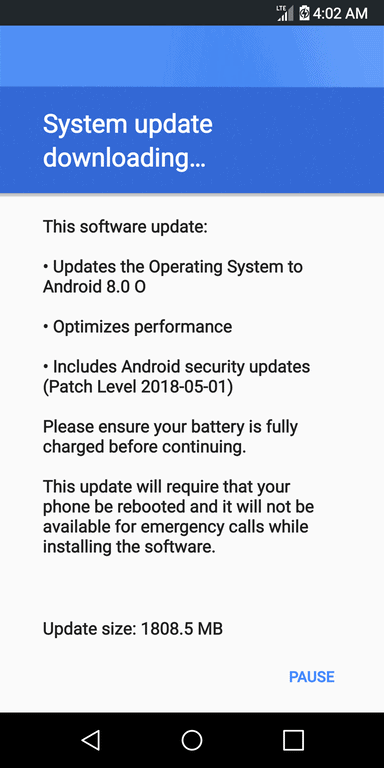