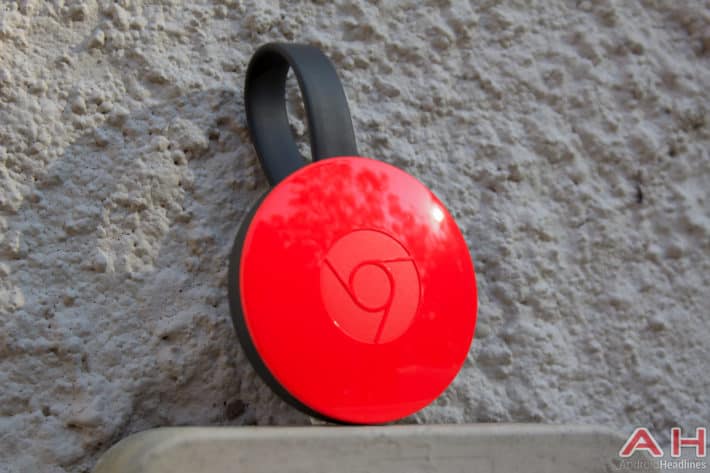 Google is preparing to put out a Bluetooth version of the 2nd Gen Chromecast according to documentation discovered over at the FCC. In the documents Google states that it will be updating the existing Chromecast model that carries a model number of NC2-6A5 to work with Bluetooth. To be clear, this is not an entirely new model of the Chromecast and not the next generation of the device. It is the same model as the one that is already available, but in the new version of it Google is going to be enabling the Bluetooth radio within the chipset that is inside of the device to support Bluetooth.

For further reference the existing version of the 2nd Gen Chromecast supports both 2.4GHz and 5GHz wireless network radios as well as BLE radios. It does not currently support BT radios, or Legacy Bluetooth radios as they're also referred to, which is why Google is pushing out a new version of the existing model. Google also notes that existing Chromecast 2nd Gen models will not be receiving an update to the software that will enable this, meaning any consumers who would want the version that supports Legacy Bluetooth operations will need to pick up this version once it's released.

Since this is just hitting the FCC there's no telling when this model will hit the shelves, but Google does note that all of the hardware components and the mechanical components, as well as the design of the unit itself, are exactly the same and have been unchanged, which probably means it wouldn't take long for Google to launch it. The new version of the device is listed under FCC ID A4RNC2-6A5B. In addition to unchanged hardware, the RF parameters, RF power, previously approved operating modes, and maximum output power will be unchanged from the original version that launched without Legacy Bluetooth radio support. What exactly this means for functionality is unclear as the documents don't mention any details about any improved or new features, but they do state that the new version will have Bluetooth functionality. It's also possible that Google may talk more about this version at Google I/O 2018.