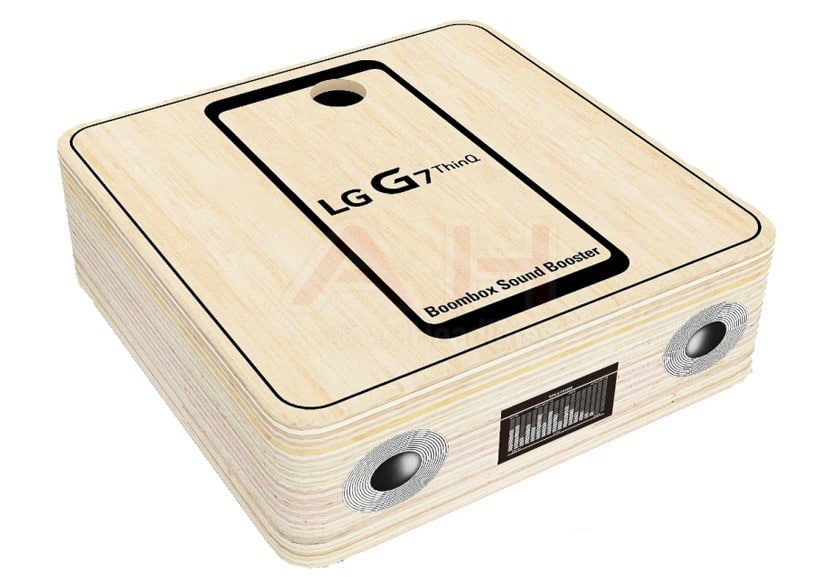 When LG announced the G7 ThinQ, it used the opportunity to highlight the improved audio properties on offer. Including the phone’s ability to emulate a resonance chamber, wherein the device itself helps to increase the audio volume through its physical form, and something that is even more apparent when the handset is placed on a flat surface, such as a box. If anyone was under the impression this was more of a marketing spiel than anything else, then it seems LG might be about to release a more robust solution to accompany the G7 ThinQ – an actual resonance chamber.

The images above and below were provided to AndroidHeadlines by a reliable source and showcase what is said to be an upcoming official accessory for the G7 ThinQ. As detailed in the images, this accessory is going to arrive branded as the Boombox Sound Booster, and while the available information on this product is limited, the name is largely self-explanatory – this box will provide an additional volume and bass boost to the G7 ThinQ. Based on the images, it does seem as though this is just a box as it does not look to be a powered audio solution. Instead, this looks likely to be a passive amplifier where the user simply places the phone on the box (it even comes with an outline of the phone to indicate its optimal placement) and the box itself helps to increase the volume by virtue of its physical dimensions. In the buildup to the release of the G7 ThinQ, LG was quick to state that any box (or flat surface) has the potential to improve the volume and therefore this is not necessarily something that is going to be needed by those looking to improve the sound and volume of the Android flagship. However, where the specific selling point for this one will come in, is the fact this box has been specifically tailored to maximize those effects based on the G7 ThinQ’s unique size and shape, as the box itself is relative to the body of the handset.

One way to better understand how this works is to draw on how an acoustic guitar (or any stringed instrument for that matter) works. As this is a product that typically utilizes the air pressure generated from the plucking of a string, which is then combined with the guitar’s body (the resonance chamber) and the sound hole to produce an increase in volume. It is exactly this approach the Boombox Sound Booster is likely to be using as once the phone is in position, the air pressure generated will combine with the box, and the included sound hole, to offer a louder volume level and a more pronounced bass. So while it is just a box, it is also not just a box – it’s one specifically made with the G7 ThinQ in mind.