Edifier’s W830BT over-ear headphones are comfortable and the battery lasts for days.

Priced at just $69.99 thanks to a limited time $10-off deal via both Amazon and its official store, Edifier’s W830BT Bluetooth Over-ear Headphones are a serious bargain for those that love high-quality audio. Perhaps better still, they feature a genuinely long-lasting battery or can be wired if that battery happens to die and that doesn’t take too long to charge. Although there are undoubtedly headsets available on the market with better specs, aesthetics, and features, it’s less certain that a better battery could be found without a considerable increase in cost. Moreover, there are at least a few features that set these apart even with consideration for more pricey hardware. In fact, during our test, it was very difficult to find anything worth complaining about and none of them were dealbreakers. 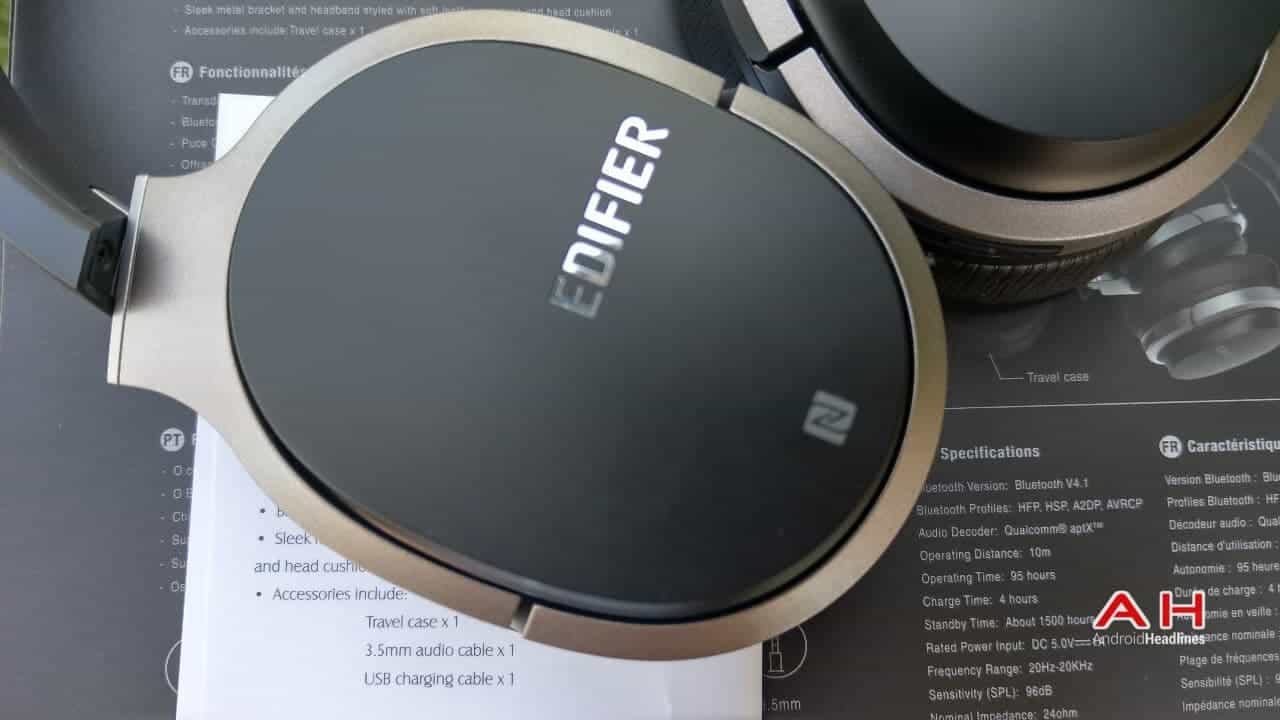 With regard to specifications, simply looking at the pricing of these headphones wouldn’t do justice to what’s inside or their design. Despite being middle-of-the-road with regard to where they fall in Edifier’s lineup, high-grade aluminum and polycarbonates are used in their construction. The soft, high-quality leather earpads swivel up to 90-degrees and fold away for storing outside of their case. So there’s a lot to love about these headphones, to begin with. Numbers aren’t given for the power supply found in the W830BT but they are said to last for 95 hours of listening. Whatever battery that is, it works over Bluetooth 4.1 at up to 10 meters from the source device or they can be wired up via 3.5mm jack if needed. Audio decoding is delivered via a Qualcomm CSR8645 chip with AAC and Qualcomm aptX decoding, with the sound being delivered through 40mm drivers. Impedance is rated at 24 ohms, so these not quite as clear as some more expensive sets but are definitely better than most on the market. Meanwhile, the frequency response is listed at 20Hz to 20KHz, with a sensitivity of 96dB. 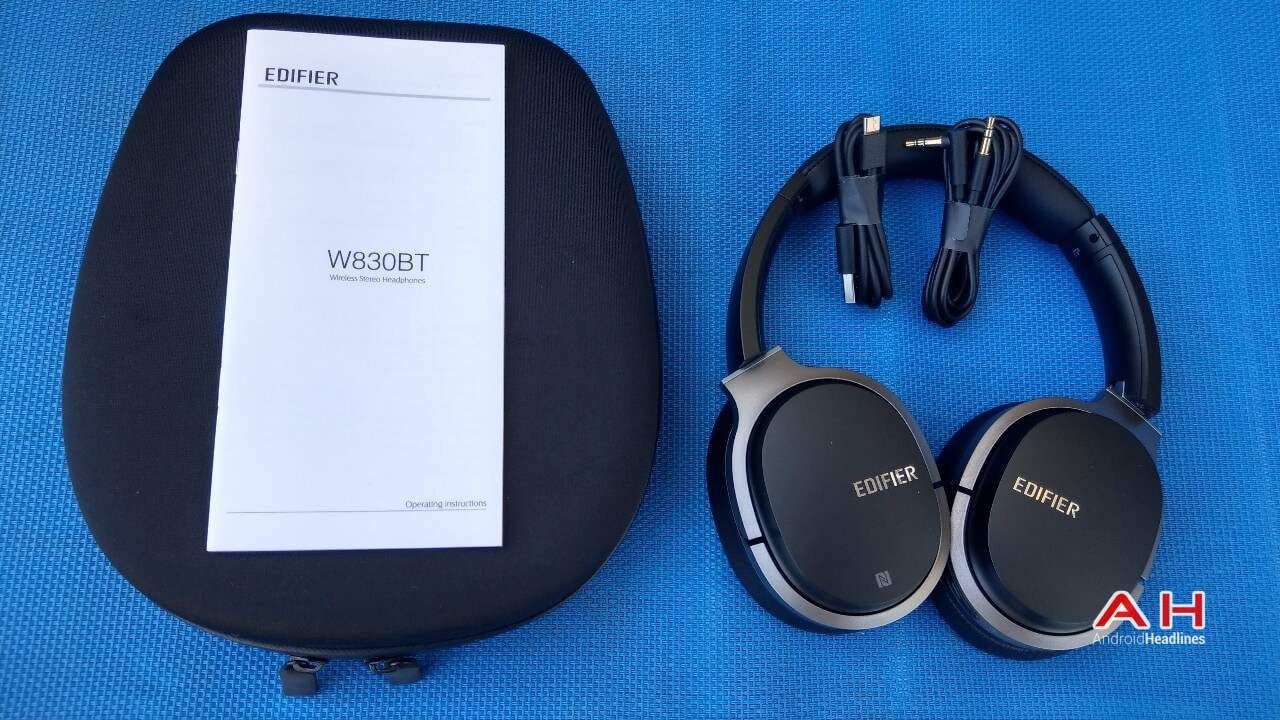 Opening the box from Edifier reveals the included travel case before anything else. Unlike many other headset manufacturers, the company has opted for a nylon thread-coated shell case for the W830BT set. Unzipping that reveals the headphones themselves, with the earpieces turned and embedded in soft foam to provide as much protection as possible. There’s also a velcro-lined mesh pocket which holds other included accessories. Those are an audio cable with what appears to be gold plated covering the 3.5mm plugs on each end. One end is the standard straight plug, whereas the other is a 90-degree corner plug to prevent accidental removal from a given device. The other is a standard USB to micro USB cable for charging. The latter of those two cables measures around 2.5-feet while the aux cable measures just over 4-feet in length. Once that’s all been removed from the packaging, there’s one other item in the box – a user manual. There are only three buttons on the Edifier W830BT over-ear headphones but that’s still going to be useful since there are a huge variety of functions for those and the manual explains them all very clearly. 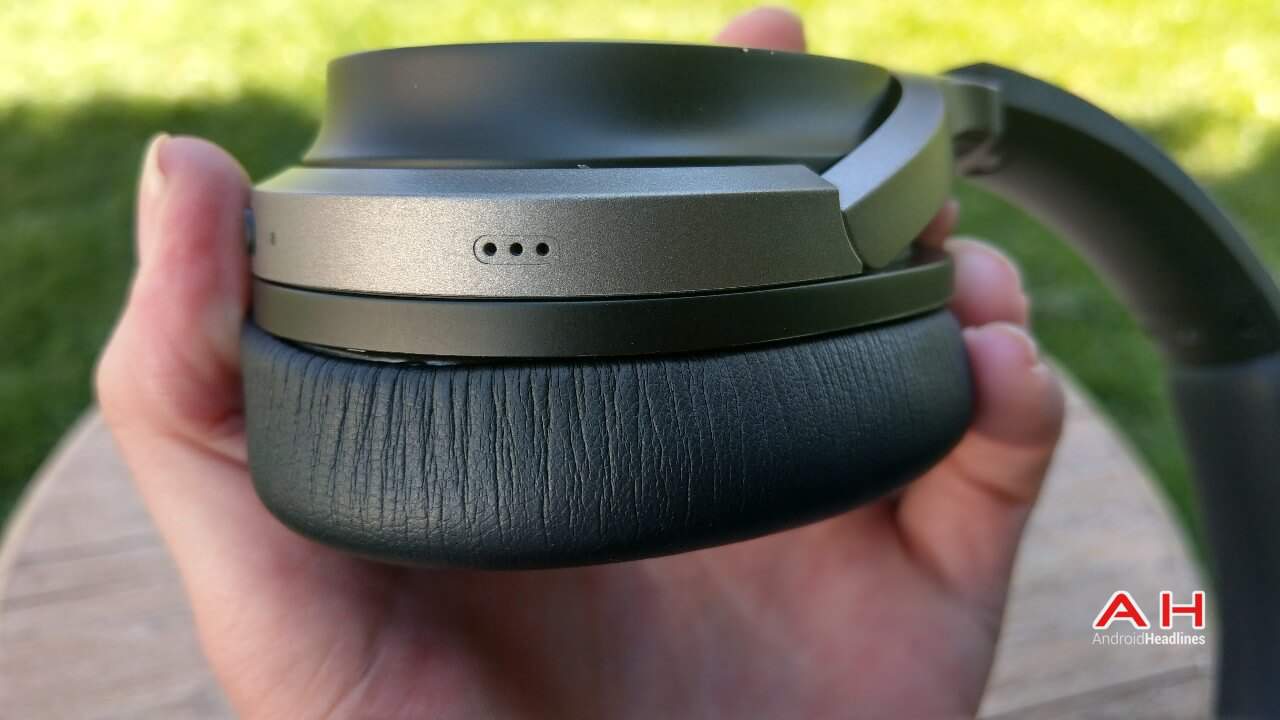 The hardware and overall design of these headphones are not at all exceptional but should live up to the standards of anybody who values form as much as function. They do only sell in a single color – matte black, with slate gold surround on the earpieces. It’s worth mentioning that the polycarbonates used here are on the softer side and isn’t necessarily durable against drops. That’s not a big deal since scars are minimal even from impacts with concrete. Meanwhile, the metal band built into the band allow for the earpieces to swivel 90-degrees for storage in the included case and a little bit in the other direction for a more comfortable fit. Beyond that, they can be folded inward for storage in a small bag or backpack if the case seems a bit much. The earpiece leather is supple and should fit neatly over the ears of just about any user, while the overall weight isn’t enough to cause issues during long-term use. A similarly soft piece of leather along the headband makes up for what little weight the W830BT Bluetooth headset does have. The buttons built into those earpieces are clicky and all of the ports fit snugly. So they should last quite some time. With that said, it was a bit of a struggle to get the micro USB plug fitted in for charging. That was no longer an issue once we learned to work around the design of the protective rubber flap, which was the source of the issue. The small piece of that, which holds the flap to the earpiece can get in the way unless it’s held away at what feels like an entirely too specific angle. But, overall, the headset seems to be very well built. 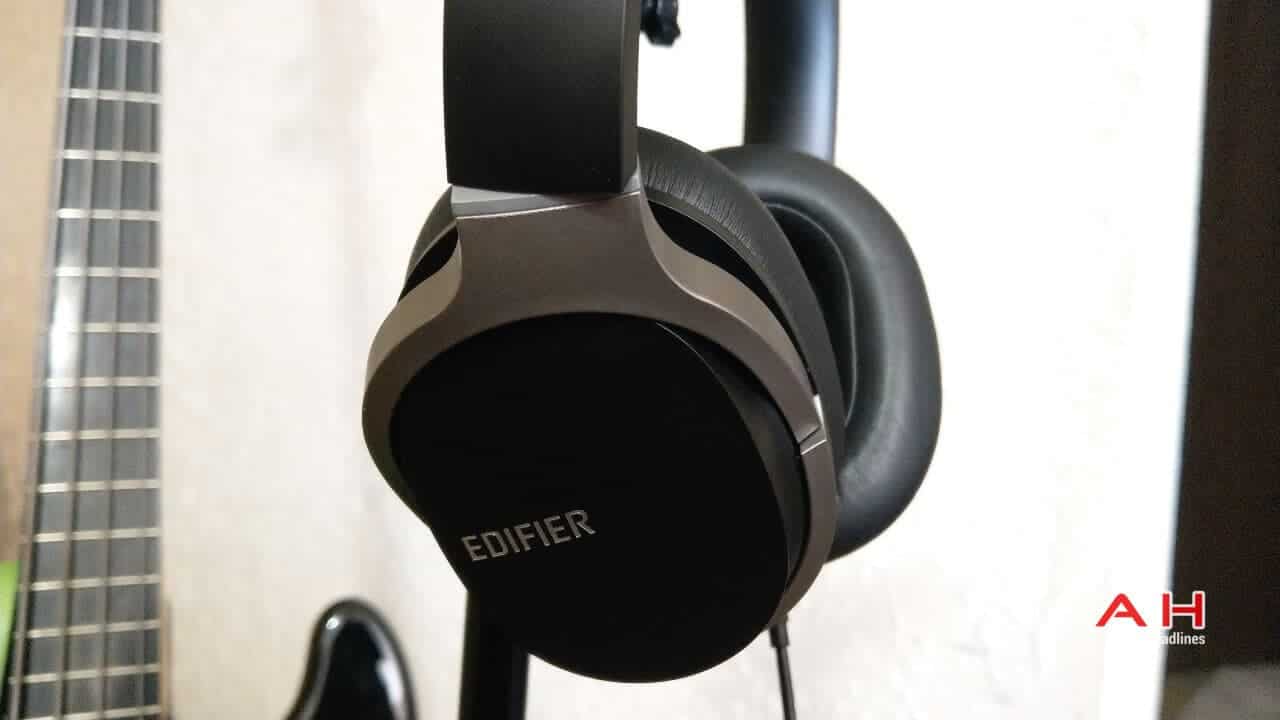 Edifier has included a secondary, speaker-like grate along the top of each earpiece, which presumably helps the speaker perform optimally. It does result in a bit of sound leak but that’s only apparent at louder volumes which most users probably won’t ever take advantage of. Even at those high-volumes, however, there really isn’t any audio distortion to speak of. That’s true whether in Bluetooth or wired mode. Phone calls, movies, and music of all genres come through crystal clear. There’s also no active noise cancellation but the fit of the earpieces nearly negates that oversight under all but the noisiest of circumstances. Highs, lows, and mids are all well-represented but there will be just a bit too much bass for those looking for a truly audiophile-like experience. That shouldn’t come as much of a surprise, given the price. Bearing that in mind, that’s a very slight problem here and isn’t going to be a problem at all for the vast majority of users. 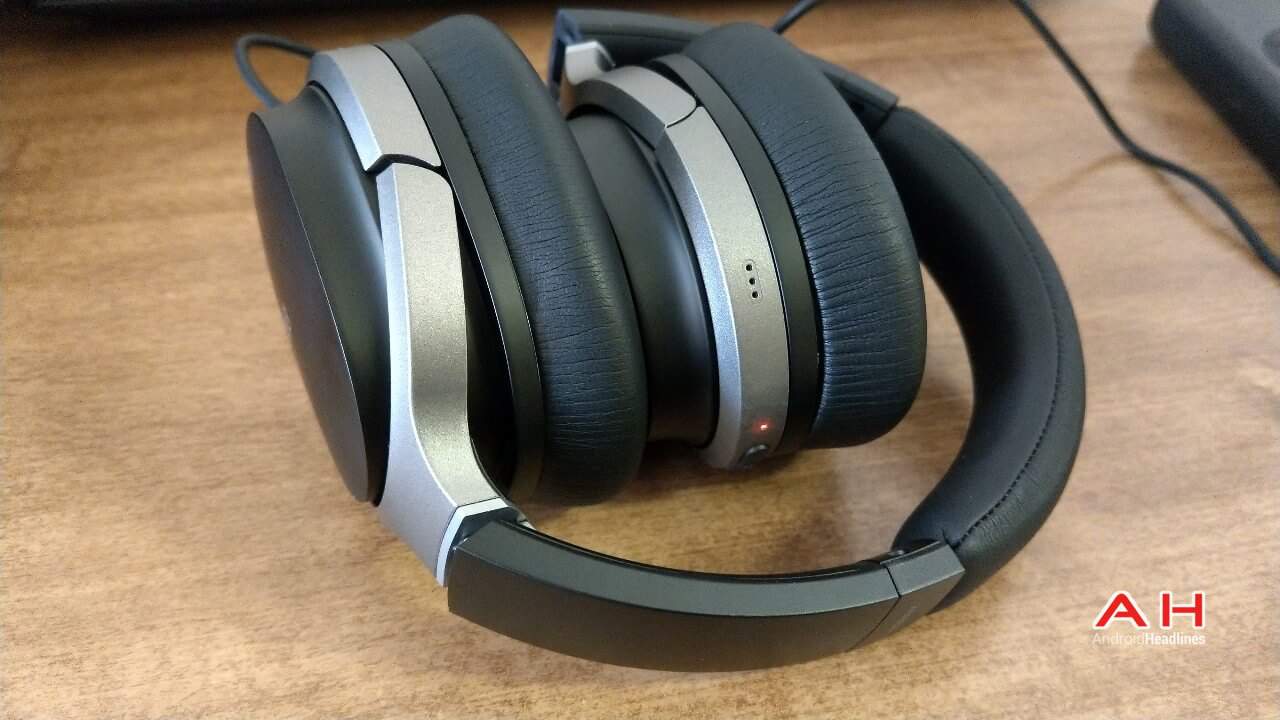 Length of listening time and connection options are areas where Edifier’s W830BT Bluetooth headphones stand apart from nearly every other entry in the category. Starting with the connectivity that’s part of the package, users have three ways to connect a source device. The first of those is via Bluetooth 4.1 and most users will already be able to work that out without much issue. A 3.5mm aux cable is included too for an even easier – and longer-lasting – listening experience. Beyond that though, users can also use NFC if their source device supports it. The connection itself will still be Bluetooth but that makes getting set up with the headphones a much easier task since it only requires a simple tap to switch. Moreover, they can be fed media from two separate devices simultaneously.

While connected, calls can be easily migrated between the headset and the mobile device simply, via the central multi-function button’s various input options. That allows for phone calls to be taken, placed on hold, three-way calls, and more from both devices when there are two source devices. A built-in mic also allows for easy access to Google Assistant, Amazon Alexa, or other A.I. assistant. Music is similarly easy to control across a wide variety of button inputs from the three included buttons.

On the battery life front, these charge via micro USB at 5V/1A and only take around 4 hours to reach full charge. If that seems like a long time, it’s because it is when compared to some other headsets on the market. However, they also have a playback time rated at nearly 4 continuous days. Conversely, standby time is rated at 1500 hours. We weren’t able to comprehensively test the standby time for obvious reasons. With that said, the battery life at around 65-percent volume and between 5-feet and 20-feet distance was just short of the advertised hours. The ratio between charging and listening is, it goes without saying, relatively spectacular.

The question of whether or not Edifier’s W830BT Bluetooth Headset is a worthy purchase mostly comes down to a few factors. If a slightly higher than normal level of bass, a learning curve on getting them plugged in and charging, just 24 ohms resistance, and a nearly $80 price tag are all acceptable, there’s not much reason not to buy them. That’s not to say there isn’t likely to be another headset in the price range that sounds somewhat better. Sound quality can be a very subjective topic. However, there isn’t likely to be any that can boast such a genuinely impressive battery life and that sound quality will almost certainly not disappoint. Meanwhile, in terms of form and comfort, Edifier has hit a home run with these over-the-ear Bluetooth or wired headphones. The pads rest gently against the head while not feeling like they’re going to fall off at all and not causing any discomfort in most circumstances. Unless the price is an obstacle, and there are plenty of great listening experiences available for less, it would be difficult to fault somebody for choosing Edifier’s W830BT.